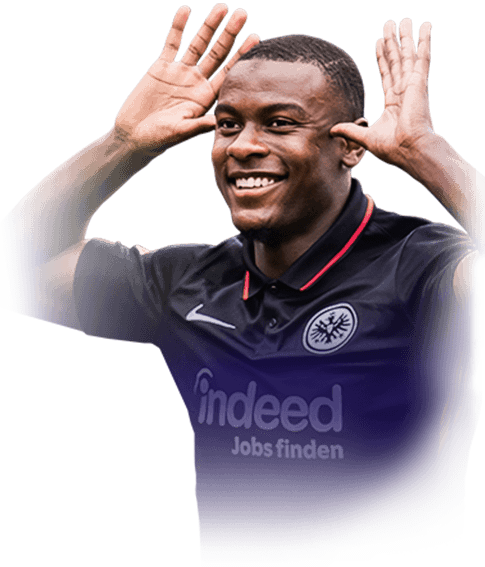 1
Red
Upcoming Matches
P. Chemistry
Squad chemistry
ST
74
RW
78
LW
78
CF
77
RF
77
LF
77
CAM
80
CM
83
RM
81
LM
81
CDM
86
CB
87
LB
85
LWB
84
RB
85
RWB
84
Reset
Basic
Sniper
Finisher
Deadeye
Marksman
Hawk
Artist
Architect
Powerhouse
Maestro
Engine
Sentinel
Guardian
Gladiator
Backbone
Anchor
Hunter
Catalyst
Shadow
Comments
Reviews
0
/600
Click here to verify your account in order to comment Update my avatar Dos and don'ts
Top Rated
New
Controversial
Show comments
Top Reviews
Only logged in users can submit a review
A review must be written in English
At least 200 characters are required.
Compare this player to other similar players you have used(optional).
If you import your club to FUTBIN or send us an image with the player data(fill the form below) your review will be marked as verified.
Include what you liked about the player in the pros area and what you disliked about the player in the cons area.
Your review will be manually checked during the next 24 hours.
Chem Style Used
Formations
Position
Rate Player Base Stats (1-10)
Pace
5
Shooting
5
Passing
5
Dribbling
5
Defending
5
Physicality
5
Most Used In:
Submit Review

I was hoping for a good linkable cb Future Star and because LaFraud will probably cost more than my family i bought this Ndicka for cheeky 230k.

This guy really is one of the best CBs i´ve played all year. I start him in a 4-5-1 with Sule Showdown and I only conceded 2 goals in 6 matches which is really good for me because i am not the best player. He blocks almost every pass and there is no player he can´t stop from scoring. His passing and dribbling are also very good and for me he is one of the Top 3 CBs in the game. I prefer an Anchor on him, because he is unstoppable with his boosted Physics and Defending, he is a fusion of Kimpembe, Upamecano and Rudiger. This guy is so good and so linkable, so if you can´t afford Lacroix and you can´t wait a week for Team 2 then you should get this beatiful and absolutely every striker destroying card

Greetings my fellow futters! This is my first review on here and hopefully I can provide you guys with some good input!

I was a really big fan of my partnership with OTW Upamecano and WW Niakhate, but my Niakhate would always find a way to do something silly in decisive situation so I was looking for a decent upgrade from him. Then EA released this and it was like they answered my calls!

Pairing him up with Upamecano is the best thing that has happened to me yet in FUT22. My god can this guy defend. Not only is he strong and fast but he can split a defense with his killer passing and dribbling. Perfect if you want a creative CB that also knows how to defend very well.

Coming up against TOTY Mbappe, Lewa, Ronaldo, Pele etc, in div.1 he would make crucial interceptions and catch them on counter attacks without breaking a sweat. His AI defending is literally what kept me in those tight, tight games.

Guarding the goal like his life depends on it with crosses, through balls, 1v1, and doing it with style and bravour!

I would highly recommend getting this guy if you are struggling with defence, and not looking to splash all the cash on the other OP centrebacks you always seem to come up against.

Looking for a cheap, good CB? He is your guy.

Looking for a creative CB? He is your guy.

Looking for a CB with good links? He is your guy.

Looking for an Italian CB? Maybe not your guy.

In conclusion it would be a safe bet to say he is going to follow me right to the end of this game. Most likely with that OP Upamecano partnership. You WANT to have him in you team.

Thank you guys, hope you are well in these special times.

Pace. Can catch everyone

Sweeper. Show up wherever the ball goes.

Heading: Destroys the likes of VVD in the air.

Strength: There is no match for him.

Passing: Can split the opposite defense with one pass.

Not a single one.

Ndicka played a BIG part in my defense, however it felt like Teze did all the hard work.

I bought him for exactly 160k and he shrunk the same evening to 125k and the next day to 100k. For his prestations 100k is to low. He could easily be over 250k in my opinion with his prestations and links(France, Strong link to Nkunku and Sow)

Ndicka made 8 of 10 match ratings almost every match and he did those 10 games with 1 goal, 0 yellows, 0 assists and 0 reds.

Comparing him to my other CB Teze he is OK while Teze is insane. I can still get that Ndicka's price is higher because of links however Teze is much better in game for me.

Height at corners. His height(192 cm/6'4'') is INSANE at both attacking and defensive corners. He managed to put ONE ball in the back of the net however he won almost 10 attacking headers at put 3 of them at target, one being saved by the keeper, one being cleared on the line and one going in. I may not be the most clinical corenerplayer however I would like him to put at least 50 % of the headers at target.

Pace. Most of the time he feels pretty fast however he need a little bit more AGILITY.

PHYSICALITY. If he comes close to an attacker he will push the attacker away. Running into Ndicka is like running into a wall.

Defending. I don't think I have to write that he can tackle. With a SHADOW at 10 chem he gets 99 SLIDE TACKLE & 99 STANDING TACKLE.

AGILITY. In my 10 games using him I noticed that his AGILITY feels more like 65 than 77. That sometimes affect his PACE and makes him feel more like 86 PACE than 95(with SHADOW). I would like atleast 80 AGILITY however I think that his height(192 cm/6'4'') also helps decrease this stat. Sometimes he feels very hard to move.