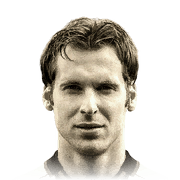 1.0
Couldn't even save a document
2 users liked this review

This guy couldn't even save a document to save his life! I used him for threee matches and that was enough. Animations are off, no helmet and he will not save a single shot. I put 5 stars on game changer, having no keeper makes it very difficult to win anything. You're better of using Insigne in goal.

If the ball is coming straight at him, he will move.

Unfortunately, I got it from the Prime / Mid icon pack, which I wasn't so happy with because I had done its MID sbc before and it was awful. But I gave him a chance to think he would be unreal, but the opposite is true. But again, I can't say it was as disastrous as the MID version. This PRIME Guild has terribly inconsistent performances. He catches one match in deed and the other can't even touch the ball. What I can blame him for is the keeping of his position in the goal, often with faster changes of sides in front of the goal being slowed down in response. He often does not hold a good position. Furthermore, as far as catching is concerned, shooting ranges usually catch, and when someone goes close, the Czech Republic is completely out, there is very little chance that they will catch something. Overall, I think it's more cool than its MID version, but such a Laifont SIF is much better.

-there are better options

At the beginning. I got him from mid prime icon pack. I had in my squad Wojciech Szczęsny 87 so I thought it will be nice upgrade. How wrong I was...

This card is so bad. He cant save simple shots. He have weird animations that makes him act like handicapped. if there is low shot he jump up to reach top bins, if there is top bin shot he act like he want to save low shot. I have no idea what is wrong with this guy. In corner kicks He stays in goal (never catch a ball). I liked Petr Cech in real life but this card have nothing in common with his real life performance. Almost forgot every shot after Cech save is going to opponent legs...

Don't waste your money on that card. Szczęsny 87 is doing much better form me. Better to get him in mid version.