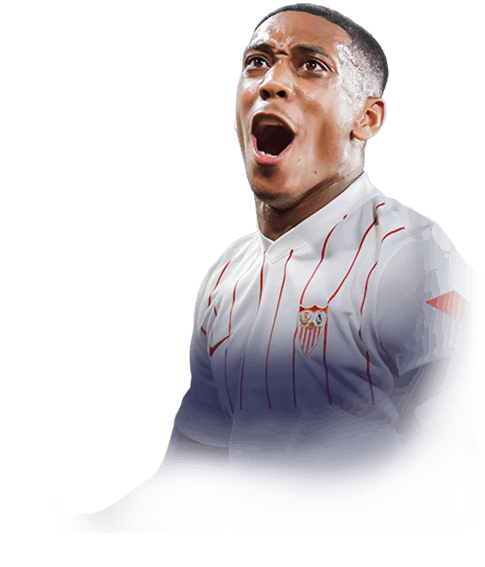 Fantasy FUT Team 2 hit the markets on Friday and I don’t know if I could split the difference from Team 1 on paper.  I am interested to know what you think?  Let me know in the comments, Team 1 or Team 2 and why you made the choice.  It was a bit of struggle picking review candidates early on but one card that seemed to stand out was Fantasy FUT Martial.  The Frenchman has tried to resurrect his career this season with a move away from Old Trafford and received his first special card for Sevilla in Team 2.  In truth, I wasn’t the biggest fan of the Winter Wildcard version but was certain that the massive increase in statistics across the board would yield a better card.  After a strong performance last weekend the 4-2-2-2 formation was calling my name yet again with Martial an obvious option to lead the line.  The HAWK chemistry style seemed the obvious choice and everything was set for another push for 16 wins… or so I thought.  With some early hiccups, I decided to try the ENGINE chemistry style, then came the MARKSMAN, before finally settling on the HAWK as the go to… having not fully enjoyed any of them.  Martial ended up as the mirage all weekend in the following squad: 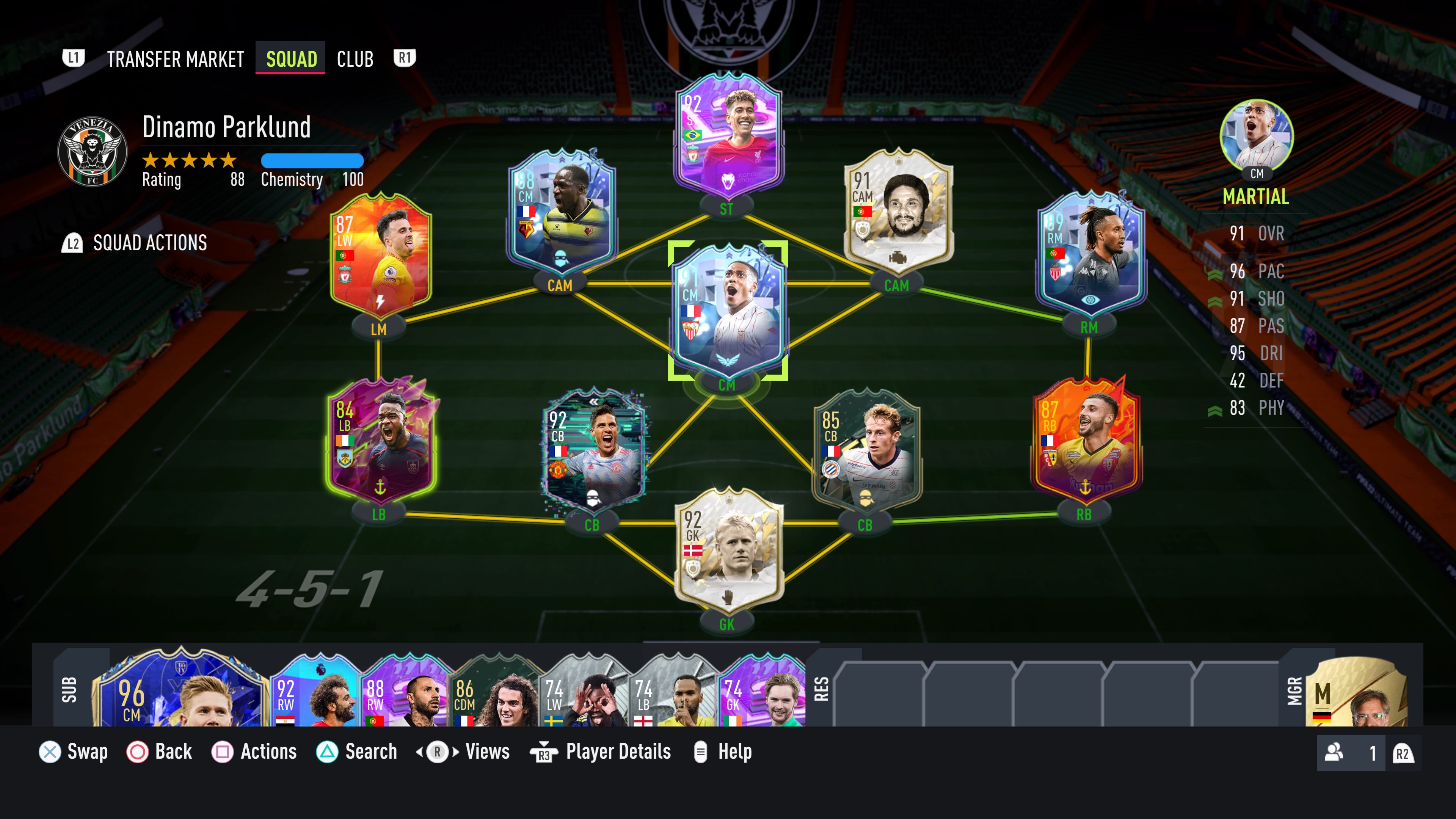 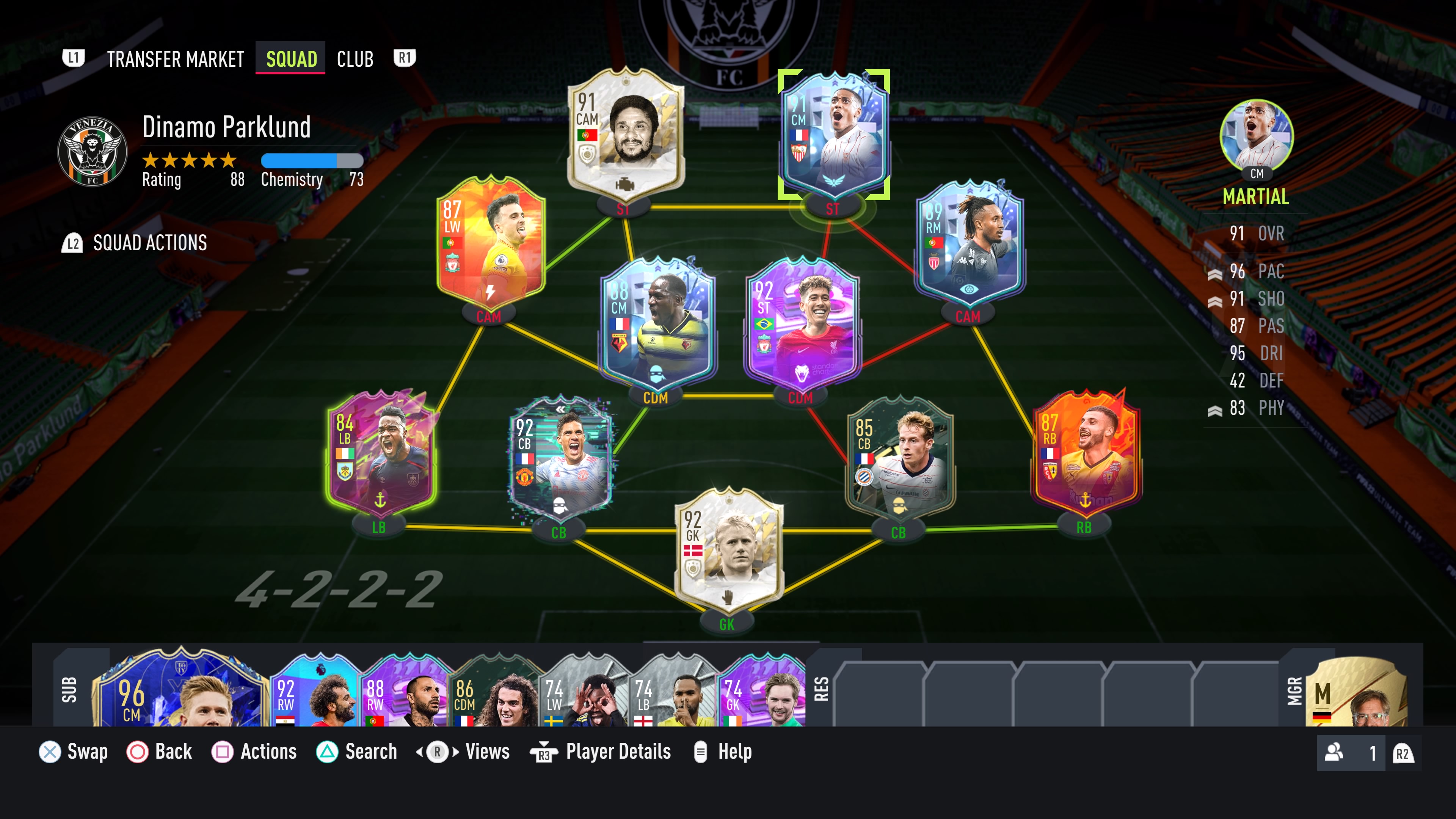 The simplistic definition of a mirage is, ‘something that appears real or possible but is not in fact so.’  While a more complex definition reads, ‘an optical illusion caused by atmospheric conditions.’  In both cases, I think they suit this card perfectly.  In the first case, Fantasy FUT Martial looked like a game breaker and a possible hitman to carry my squad into more wins this weekend… the 11 goals in 15 matches are a good indication of how that went.  While the second definition might work even better on the surface I thought my squad was going to be cracked this weekend and due to those ‘conditions’ I thought Martial would fit in perfectly… that optical illusion quickly vanished as I watched the Frenchman lumber around the pitch and generally cause me nothing but grief.

I purposefully started out this review by showing the build up play to one of the goals Martial scored for me this weekend. Generally speaking, this card was decently strong on the ball and the hold up play was okay.  The inability to really spin out of those challenges or accelerate away from them meant that he simply had to be stronger.  However, if you watch the video you will see Martial get easily disposed by Varane to kick it off and then bailed out by Clauss in the following tackle.  In another universe, that ball goes back and ends up in the back of my net, which happened on occasion this weekend.  The 95 STRENGTH on a 184cm |6’0 card should have held up better, and it did at times, but not consistently enough to earn a higher rating.

One look at the statistics with a HAWK and I was certain the goals would be raining down on my opponents this weekend.  You start with a 4 STAR WEAK FOOT and the double barrels of the OUTSIDE FOOT & FINESSE SHOT traits… followed by 96 FINISHING, 99 SHOT POWER & 97 LONG SHOTS… all of which left me thinking that the 2.0 per game tally was not only vulnerable but inevitable.  Midway through my first match, a wide open left footed finish missed the net and in my mind, I thought… “okay that is a one off and it happens.”  Little did I know it would be a sign of all the things to come with this card and a lack of clinical edge.  The card has every tool and I am sure there will be some comments of x goals in x games but I can only write from experience.  Even a look through the video shows goals that are not of much quality and speaks to the disappointment overall.  Yes, he banged in a few… hence the 8/10… but nowhere near the consistency FUT Managers need at this stage in the game with so many cards to rival the price tag.

If you only look at the statistics on this card then 800k almost seems like a steal, especially when you consider that this card will be due to some upgrades.  Maybe that is the first red flag?  A card of this quality with those statistics and traits with links to the thousands of French special cards maybe should be higher?  With the market this year I never really know, but what I do know is that I would not be buying this card tomorrow if it dropped to 500k… 400k maybe… but even then I think I would look in other directions.

There weren't many redeeming qualities for this card throughout the weekend.  I felt the body type and size held this card back from reaching the 99 ACCELERATION for sure… was limiting in the 92 AGILITY & 88 BALANCE and overall caused issues with how the card ‘felt’.  This might have been forgiven if the card was lethal but again, fell short there.  Maybe, just maybe I would have let it slide if the link up play was on point… but even the 93 SHORT PASSING and certainly the 72 LONG PASSING & 87 CROSSING all seemed to miss their mark at times.

In a review that was generally negative, I still think it is worth talking about the fact that this card has a lot of quality statistics and perhaps an upgrade or two could really bring those into the spotlight.  However, at this current point in time, I would recommend steering clear of the Sevilla striker for the time being.  I had a nightmare with this card during the weekend and if it had been an entire squad issue I might have chalked it up to gameplay.  But with Jota and Eusebio finding the back of goal with relative ease, they were left to carry the squad with Martial’s lack of performance the key highlight.  I am interested in those that have used him if there is a magical chemistry style out there that I have missed to unleash the striker?  But for me… for now… a huge thumbs down.  Hoping you are well.  Cheers for reading. 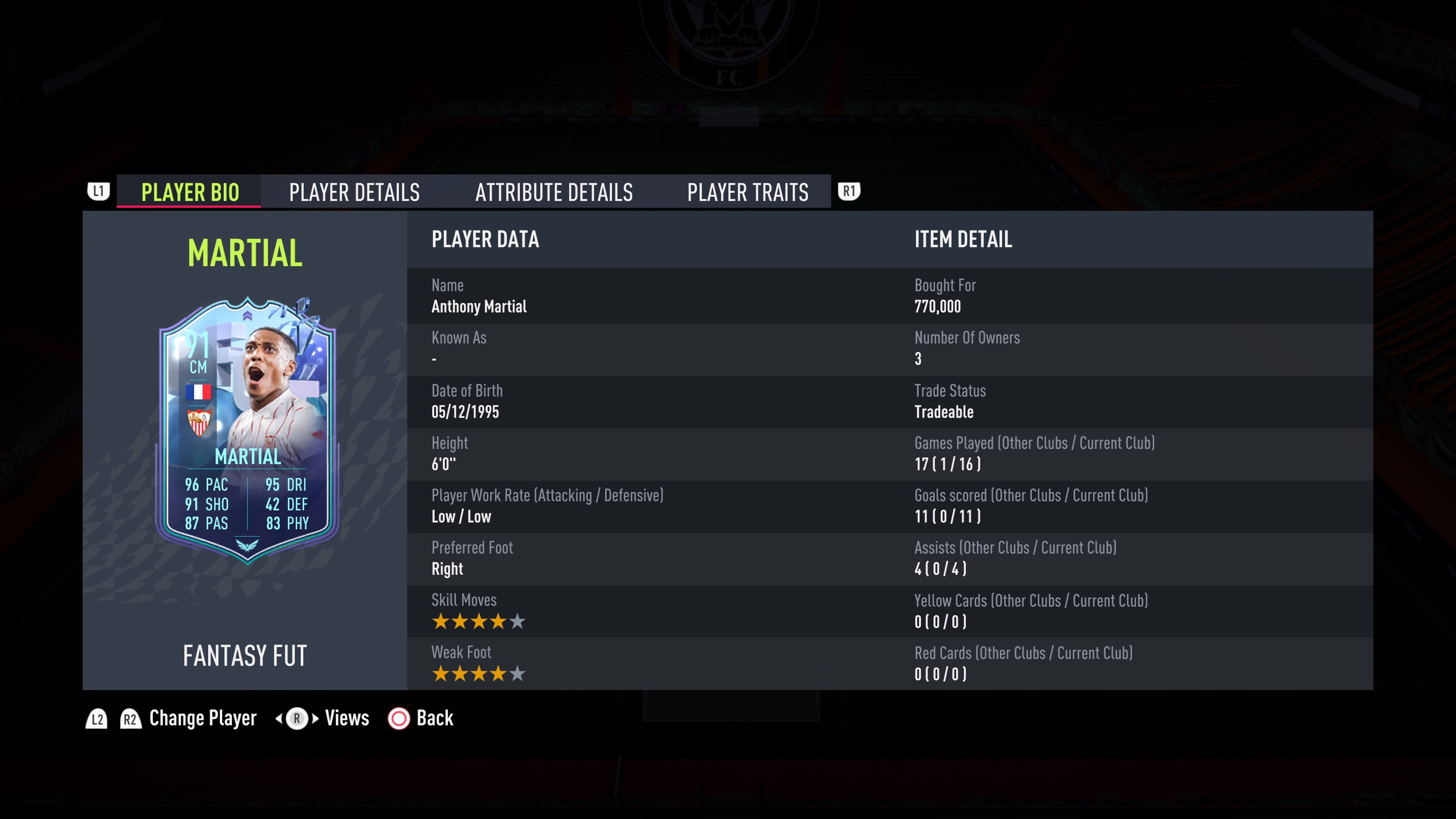 I was in hesitation because of his work rates and all but as soon as i picked him i've got surprised by his thirst for soccer. Was using if mbappe earlier and for a fresh experience i got fut fantasy Martial and let me tell you, this card is phenomenal. Great header, great finisher. From time to time he convinces you that he's the one for you. And keep that in your mind that he'll be upgraded as well.