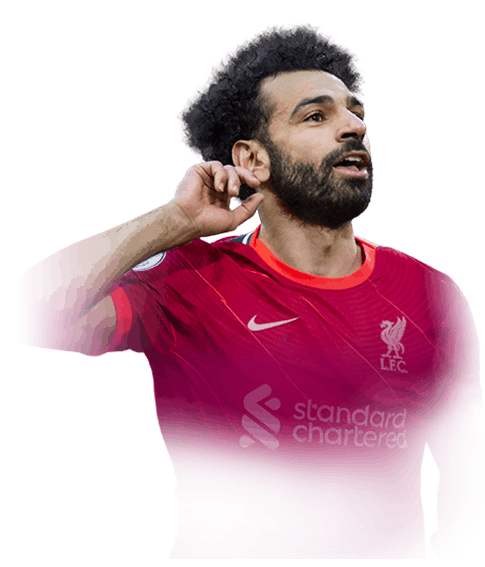 Mohamed Salah's FUTTIES WINNER card is rated 99, he is 175cm | 5'9" tall, left-footed Egypt midfielder (CAM) that plays for Liverpool in Premier League with High/Med work rates. His average user review rating is 4.5 out of 5 . He has 5-star weak foot and 5-star skill moves, giving him the ability to perform every skill move in the game. He does have a real face in-game. Mohamed Salah has 8 special cards with ratings between 89 and 99. He was born on 15-06-1992 and he is now 30 years old.

His real-life stats are currently 2 goals and 3 assists in 6 matches in domestic competition. He also received 0 yellow cards and 0 red cards.

For me, as a liverpool fan, getting this card was an absolute must. Once i saw he was leaked, i got as many summer swaps tokens as possible to spam fodder packs so i could get this card. Once he dropped and i saw it was 5* 5* and 99 rated, i lost my mind!! I did the SBC asap and threw him into my team and boy was i not dissapointed. In 7 games he scored 20 goals and made 4 assists, all in division 1, elite division and fut champs qualifiers. I used him at ST and CAM in a 41212(2) with an Architect chem style(and no , he did not build me a pyramid.)

With that being said, i am going to go through each face stat and rank it out of 10.

Pace: Mans got 99 pace , 99 agility and 99 balance and he's 5'9 tall. You would expect him to be insanely fast and he is. He can accelerate through teams and run in behinnd away from the super fast CBs at this stage of the game too! 10/10

Shooting. Cracked. There's no other word to describe it. He scores everything. Power shots, penalties, Finesse shots, volleys, long shots, chip shots , on the left foot, on the right foot(5 * weak foot really comes up clutch), EVERYTHING! Just shoot and it flies in haha.he has the best AI runs in the game without a doubt. 10/10

Passing: Similar to shooting, he can do everything. Every pass comes off so easily with this guy, and plus he has the flair pass trait if you want to mess with the opponents head. It's on par with shapeshifters Messi,and since i gave him 10/10, Salah will also get a 10/10 for passing

Dribbling: Honestly, i think he might just be the best dribbler in the game.He has better dribbling than shapeshifters Messi(who i also have in my team) and might just be on par with futties neymar(yes, i just dared). The 5* skills make him so much fun on the ball too. 10/10

Defending: doesn't matter but his pace and strength does help if you really must defend with him.

Physical: with the architect chem style, his strength goes up to 99 and aggresion up to 92. 99 Stamina lasts him the whole game. So i will give him 9.5/10

Final verdict: Best player in the game! You can play him at CAM or ST, depending on who you have in your team and where you want to play him. I reccomend ST tho, he' 1.7 mill so you'd want to get the most out of him. He's worth every penny you will spend on him. Get him as fast as possible so you can enjoy him before fifa 23. What are you waiting for? go start him now lol !

Possibly the best finishing in the game

Best attacking runs in the game

Best dribbling in the game

Premium futties so he links to the other futties cards and gives green links to everyone in the prem.

I know its September, and I have been off FIFA for a while but a few days ago I completed this card and it is INSANE. He never loses the ball when he's dribbling as its literally glued to his feet, he's fast and his finesse shots are incredible. The 99 stamina is also amazing as it means he never stops destroying defenders. And obviously another huger perk is the 5*5*.

After getting about 7 dupes in my daily 85x10s I realised that I probably have enough fodder to complete the card that looks like its the best in the game. I play him in game at Striker in a 3-5-2 next to 99 Ronaldo and he is an amazing dribbler and feels extremely silky. However, his shooting is extremely underwhelming and after many a missed shot, I found myself passing the ball to Ronaldo instead of taking the easy chance with Salah.