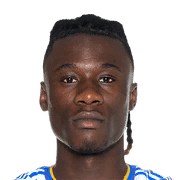 -
Sub out
Upcoming Matches
P. Chemistry
Squad chemistry
ST
72
RW
75
LW
75
CF
75
RF
75
LF
75
CAM
76
CM
78
RM
76
LM
76
CDM
78
CB
75
LB
76
LWB
77
RB
76
RWB
77
Reset
Basic
Sniper
Finisher
Deadeye
Marksman
Hawk
Artist
Architect
Powerhouse
Maestro
Engine
Sentinel
Guardian
Gladiator
Backbone
Anchor
Hunter
Catalyst
Shadow
Comments
Reviews
0
/600
Click here to verify your account in order to comment Update my avatar Dos and don'ts
Top Rated
New
Controversial
Show comments
Top Reviews
Only logged in users can submit a review
A review must be written in English
At least 200 characters are required.
Compare this player to other similar players you have used(optional).
If you import your club to FUTBIN or send us an image with the player data(fill the form below) your review will be marked as verified.
Include what you liked about the player in the pros area and what you disliked about the player in the cons area.
Your review will be manually checked during the next 24 hours.
Chem Style Used
Formations
Position
Rate Player Base Stats (1-10)
Pace
5
Shooting
5
Passing
5
Dribbling
5
Defending
5
Physicality
5
Most Used In:
Submit Review

I have tried Camavinga during all my games in the early acces 10h trial which unfortunately has ended, but I decided to write a little review here for this community. I'm going to start with saying that I have used him as a dm in many different formations with an anchor slapped on him and he is a beast on the midfield. You may think his pace is too low but it feels like he is on some hard shit when running past everyone like I'm facing a bunch of disabled 10 year olds. He is like Usain Bolt so don't let the pace foul you. There are often balls that bounces of someone or a slow pass and camavinga is always there to pick the ball up. It just feels like he is at the right place in the right time at all times. I used mckennie next to him in most of my games but had to get rid of him for chemistry and the fact that I wanted to try de paul badly. He was also very good but I don't think you can even compare the two of them. Camavinga feels quicker even though he has lower pace and his passing is fenomenal and he will be in my team for the coming weeks maybe even longer. If he gets an IF or something the entire fifa community is pretty much fucked.

positioning in the midfield

not the strongest but it hasn't affected how he plays

I bought him when he was 7k and I'm still using him. Very decent card if you wanna get a cheap french defensive mid. Great links. Pace is his biggest con. Shooting isn't good too, but rest of the stats is quite ok. Especially for 700 coins !!