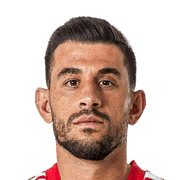 -
Sub out
Upcoming Matches
P. Chemistry
Squad chemistry
ST
75
RW
81
LW
81
CF
80
RF
80
LF
80
CAM
81
CM
81
RM
81
LM
81
CDM
74
CB
66
LB
71
LWB
74
RB
71
RWB
74
Reset
Basic
Sniper
Finisher
Deadeye
Marksman
Hawk
Artist
Architect
Powerhouse
Maestro
Engine
Sentinel
Guardian
Gladiator
Backbone
Anchor
Hunter
Catalyst
Shadow
Comments
Reviews
0
/600
Click here to verify your account in order to comment Update my avatar Dos and don'ts
Top Rated
New
Controversial
Show comments
Top Reviews
Only logged in users can submit a review
A review must be written in English
At least 200 characters are required.
Compare this player to other similar players you have used(optional).
If you import your club to FUTBIN or send us an image with the player data(fill the form below) your review will be marked as verified.
Include what you liked about the player in the pros area and what you disliked about the player in the cons area.
Your review will be manually checked during the next 24 hours.
Chem Style Used
Formations
Position
Rate Player Base Stats (1-10)
Pace
5
Shooting
5
Passing
5
Dribbling
5
Defending
5
Physicality
5
Most Used In:
Submit Review

At the beginning of fifa 22 I made myself a promise to use a team from one of the smaller leagues in Fifa and use it throughout the game cycle because I want to show people that you can win lots of games by using teams built from smaller leagues, because many small leagues have hidden gems. I decided to make it a Liga Portugal team, since TOTW 1 consisted of Luis Diaz. So I built my team around Diaz. I decided to use Pizzi as the CAM in a 4-4-1-1 formation. To this day I still have Pizzi in my Liga Portugal team, which I hopefully will use for the rest of the game. I have played over 120 games with Pizzi (rivals, squad battles and champs) and he has always been reliable. He can pass, dribble, shoot, and his pace is fine for a CAM. For me, he rarely misses in front of goal and I have been surpeised by him of how good he has been. He can even defend relatively well, but his stamina will drain pretty fast when past the 60- minute mark.

Dribbling is definitely his best stat

Passing is nearly as good as his dribbling

Stamina is a bit of an issue late in the game

Shame he doesn't have 4 star skills