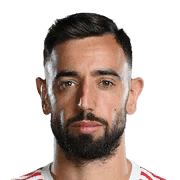 His real-life stats are currently 1 goals and 1 assists in 6 matches in domestic competition. He also received 2 yellow cards and 0 red cards.

I needed more firepower to get me over the top and now Im a div 1 player because of this baller.

You could genuinely play him as a striker his shooting is that crazy timed finesse shots are a joke low driven shots inside the box either foot are deadly.

Love his passing through balls are so accurate.

For the price he is quality so much fun to use.

Shooting (It is insane)

So, where do I begin... Bruno Fernandes, as good as he is in real life sadly his fifa card does not resemble the beast he is. I packed him untradeble so I´m using him because of that. play him CDM in a 4231 and he has been kinda disapointing. He is the type of player that runs up and down the pitch with zero impact. His passing must be his biggest liability, averages 70% in passing percentage. In defence he is pretty decent, often in the wrong position but when he is in position he often wins the ball back. His shooting is not as good as it should be, his 89 longshot and 87 curve is not visable ingame, and with finesse shots outside the box being so OP he should be one of the best to score from there but he just isn´t. His pace is not bad but not good, but as a dm you dont need it as much. All in all, he is usable but not more then that.

defence when he is in position.