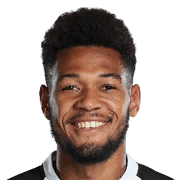 0
Sub out
Upcoming Matches
P. Chemistry
Squad chemistry
ST
74
RW
70
LW
70
CF
73
RF
73
LF
73
CAM
72
CM
68
RM
70
LM
70
CDM
60
CB
57
LB
56
LWB
58
RB
56
RWB
58
Reset
Basic
Sniper
Finisher
Deadeye
Marksman
Hawk
Artist
Architect
Powerhouse
Maestro
Engine
Sentinel
Guardian
Gladiator
Backbone
Anchor
Hunter
Catalyst
Shadow
Comments
Reviews
0
/600
Click here to verify your account in order to comment Update my avatar Dos and don'ts
Top Rated
New
Controversial
Show comments
Top Reviews
Only logged in users can submit a review
A review must be written in English
At least 200 characters are required.
Compare this player to other similar players you have used(optional).
If you import your club to FUTBIN or send us an image with the player data(fill the form below) your review will be marked as verified.
Include what you liked about the player in the pros area and what you disliked about the player in the cons area.
Your review will be manually checked during the next 24 hours.
Chem Style Used
Formations
Position
Rate Player Base Stats (1-10)
Pace
5
Shooting
5
Passing
5
Dribbling
5
Defending
5
Physicality
5
Most Used In:
Submit Review

When I was creating my squad for Silver Live Lounge, I decided on a Premier League Squad, as I was familiar with most of the players there. When I saw Joelinton as an option as a striker, I initially put him in, with a hunter chemistry style for a joke. He is probably Newcastle's worst ever signing and seeing him control a football at St James' Park has made my eyes physically bleed. However using Joelinton in my silver squad turned out to be one of the greatest decisions I have ever made in ultimate team, I felt like Nostradamus, as I had seen what my opponents and colleagues did not, that Joelinton is easily the best silver striker in the Prem.

I never thought in a million years that this weapon would single-handedly win football matches, but here we are. I've since done the Nteka and Sulemana challenges and moved on to pastures new, but I thought it would be appropriate to leave a review to any would be user of this stupidly overpowered card on FIFA 22.

Pace - The man is rapid. It actually makes me physically sick that he moves the way that he does on this game, as its nothing like how he plays in real life. Most of my opponents were using CBs with >60 pace, so the hunter chem style really showed and feel like it makes the card as good as what it is in game.

Shooting - Honestly, I couldn't tell if people were quitting out of embarrassment or doing golden goal when I scored with him, but either way, his right foot with a hunter chem style makes him the Silver Lounge equivalent of R9. Recommend power shot, or finesse if you want to be exotic.

Strength - My teams often have an emphasis on hold up play with strikers, as I feel like that's what the meta has become on this game, so having a striker with 82 strength, when competing with strong CBs is a huge bonus. Powers through a back line really well.

Heading - He's surprisingly good at heading when given the opportunity.

Defending - He tracks back and that's it, defending wise he's absolutely useless so I would highly recommend using him as an out-an-out striker.

Penalties - He cannot take penalties, starts off automatically with a massive circle, presumably like he does in real life as well, please don't use him on pens.

Dribbling - Joelinton is not Messi, even Stevie Wonder wouldn't need that clearing up but I think it's important to emphasise that I use him as a poacher and also someone to carry the ball through space, I recommend passing the ball off, rather than trying to take on an entire back line.