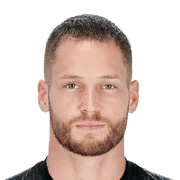 After switching between Numbersup Ter Stegen, Courtois and Oblak for a while in my LaLiga defence, I really wasn't happy with the inconsistency in both of them. They'd save some crazy shots that most goalies wouldn't save, and then let in sitters that should always be saved- a problem that almost all goalies have in this Fifa.

I decided that there's no point spending 50k+ on keepers if they're all going to have the same faults and let in the same shots as keepers under 5k, so upon looking at his stats decided to try Alex Remiro.

From the very start I couldn't believe how good this guy is. On basic chem style, his stats look solid but not amazing, though in game he is an absolute brick wall. I'll mention that I'm not an amazing player- Division 4 in rivals and sometimes play squad battles too, but this guy has been one of my most dependable players by far.

Overall, I'd thoroughly recommend. I wasn't initially on board with the idea of playing an 81 keeper behind 88 Pique and 85 Flashback Umtiti- I felt it would really undermine my defence but it hasn't at all. I'd definitely recommend saving money on keepers like Oblak and Ter Stegen and getting this guy, freeing up 50k or so to invest in your attack which is ultimately going to bring much more success than those keepers would.