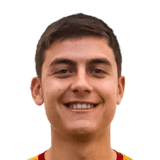 His real-life stats are currently 7 goals and 4 assists in 14 matches in domestic competition. He also received 3 yellow cards and 0 red cards.

4.5
A Beast just like previous FIFA
4 users liked this review

so as a Juve Fan, i always start my Ultimate Team with players that has / had a link with Juve, and also players that i like IRL : for example, De Ligt, Gravenberch and Dybala.

I was always a fan of Dybala in FIFA, he was my favorite player in the 2 previous FIFAS alongside De Ligt ... and i can tell that its pretty much the same this FIFA.

I played him everywhere as i'm very bad in this particular FIFA, and i'm still searching for my favorite formation.

As a CAM, or even as a ST, he is way too good. He feels agile, fast, and very very good at finishing (in all angles) everything you can expect from a player like Dybala.

for the ratio goals / assists per game, don't take it very seriously, there was some SB, but i did more Rivals

Holy crap this guy is good. Lethal in front of the goal or outside the box, agile, fast, can pass super well, I recommend him even if he has no Chem. Unbelievable player.

dribbling inside the box