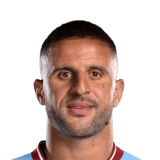 4
Sub out
Upcoming Matches
I

His real-life stats are currently 0 goals and 0 assists in 10 matches in domestic competition. He also received 0 yellow cards and 0 red cards.

5.0
One of the most OP cards I have ever used
4 users liked this review

I bought him as a replacement for Cancelo, as I thought I needed more pace at that RB spot and boy was I surprised at how good this card actually is. This dude feels like a cheat code. Absolutely NOTHING gets through him, he is incredible defensively. Pace-wise he must be the fastest player in-game that I have used, his burst of acceleration is unbelievable. I have to say, I can clearly understand why EA didn't put CB as one of his alternative positions, because nobody would score through this dude. He really is THAT good. By far the best RB in the game.