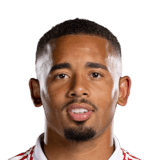 His real-life stats are currently 5 goals and 3 assists in 8 matches in domestic competition. He also received 4 yellow cards and 0 red cards.

Simply amazing, for the cheap price of 12k, he is an absolute monster, he feels so good in-game and could easily be worth pricetag of 50k. I've tried out a few other strikers like Guedes, Ferran Torres and Iago Aspas, absolute unworthy to compare to this guy. Incredible.

-Passing (Not a weakness but could be better)

-Strenght (Can get bullied by big defenders but with the pace he has, he can run around them)

If you're like me and have been struggling a bit with scoring in FIFA 23, then I've got a great solution; At ~18k coins, Gabriel Jesus will significantly improve your scoring chances in any given game. I used him at right ST along side Leon Bailey in a 4-2-2-2 formation, and Jesus has managed to fill the role of both the goal scorer, as well as the main goal creator in the squad. Hi finishing in the box is deadly (Hunter helps a lot), and despite his 3* weak foot, his left isn't as bad as you would think although it isn't perfect, obviously. Biggest surprise for me so far has been his passing, which despite being just 74, he has managed to get 12 assists in 9 games, and his overall passing in and around the box is just really solid. At times he can be a bit weak, but in spite of that he has managed to score 2 contested headers in 9 games, so even his physical isn't that big of a downside.

Overall I don't really have anything to complain about, so if you're using any BPL or Brazilian players in your current team, he's a no-brainer.