With it being Black Friday this week EA were never going to miss out on making TOTW 9 a big one and that’s exactly what we have, with several top end players making the prediction! 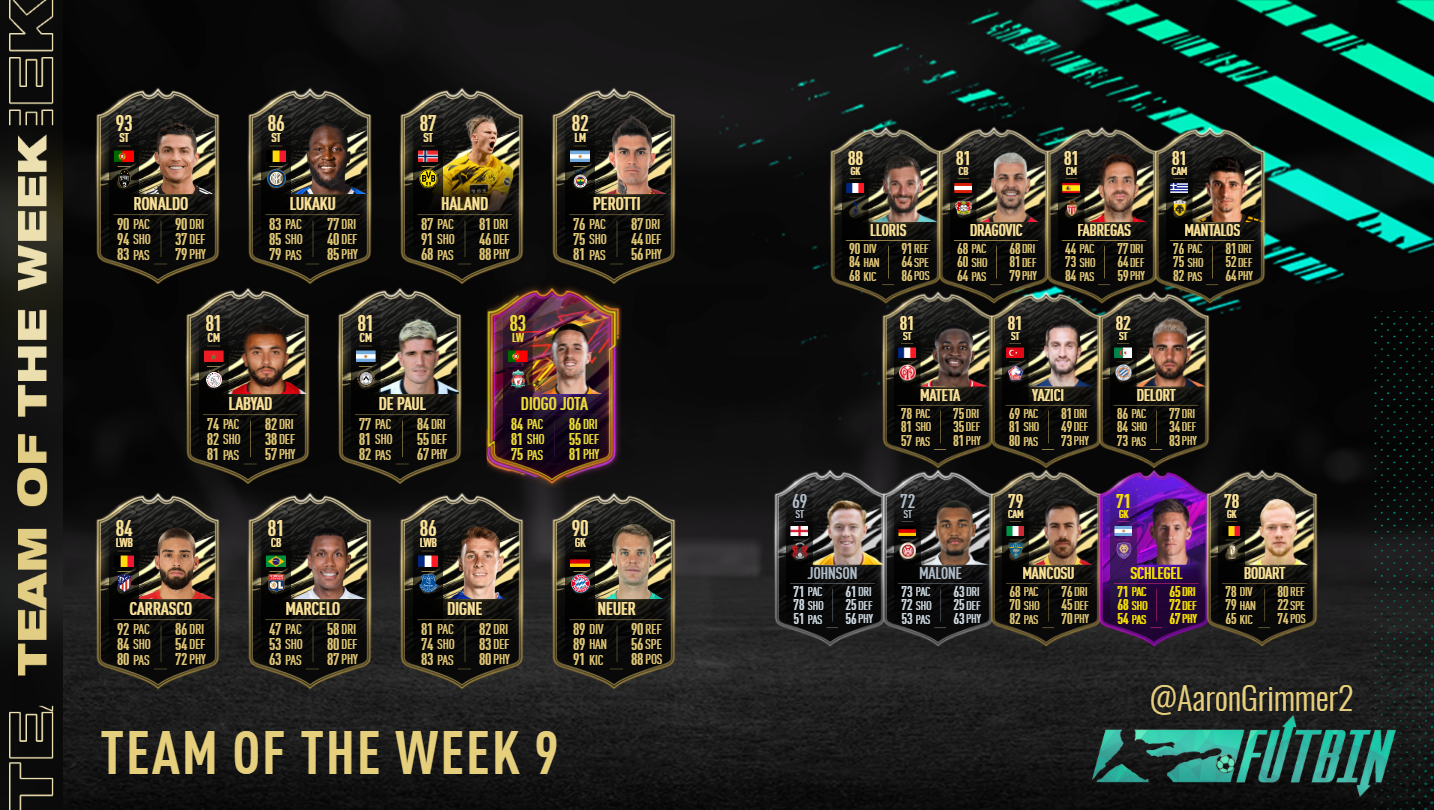 Manuel Neuer – GK - OVR 89>>90
I don’t think many expected to see a Neuer this week after Munich only registered one point in their match with Werder Bremen but kicker had other ideas awarding the German stopper a 1.5 for his two saves in said match. With it being a Black Friday side it's an easy excuse to award Neuer his first IF and I fully expect it to happen.

Yannick Carrasco – LWB - OVR 82>>84
Atletico Madrid opted for a very defensive line-up while hosting Barcelona this weekend and it is one which paid off. With Carrasco scoring the only goal on the game from LWB to continue Barcelona’s poor start to the season. This one could be classed as either LWB or LB but either way, I would expect him to be included as a defender.

Marcelo – CB - OVR 76>>81
We regularly see Ligue 1 defenders make the cut without a goal contribution, more so than any other league. Marcelo could be the next to the list after he claimed a 7/10from L’equipe in their 1-0 win over Angers.

Lucas Digne – LWB - OVR 84>>86
A lot of people will be opting for DCL here and for good reason with the Englishman scoring another two goal to add to his already impressive start to the season but with so many top end performances from strikers this week I can see EA instead opting for a strong defensive option instead. Much like they did with Dumfries and Wijnaldum last week. Digne assisted twice from a LWB role for Everton in their 3-2 win over Fulham.

Diego Perotti – LM - OVR 79>>82
Fenerbahce continued their strong start to the season with a 5-1 home win this weekend. Perotti scored two of those goals from LM and received high match ratings as a result. With the lack of clear-cut options in midfield, I can see him sneaking in despite the Turkish division often getting snubbed.

Zakaria Labyad – CM OVR 75>>81
Annoyingly Labyad failed to pick up player of the week in the Eredivisie but with a lack of clear-cut options in the position, I simply couldn’t ignore Labyad for this side. Ajax ran away with a 5-0 win over Heracles with the Moroccan scoring twice and assisting another. VI awarded him a 7.5 match rating which was the joint highest from Ajax.

De Paul – CM - OVR 77>>81
Outside of strikers, Serie A didn’t really offer much and thus De Paul was one of the higher ratings from Gazzetta with a 7.5. He scored the only goal of the game as Udinese managed a 1-0 win over Genoa and dominated the game from the middle. He was unlucky not to double his tally with the woodwork denying him and Gazzetta awarded his performance with a 7.5.

Diogo Jota – RW - OVR 80>>83
Jota has been overdue an IF for a few weeks now and I feel as though this is his best chance of finally getting one. The Liverpool winger has excelled since making the move from Wolves and scores practically every week now. Once again, he found himself on the scoresheet. This time during Liverpool’s 3-0 win over Leicester and although both Robertson and Milner also stand a chance, I can’t overlook Jota here.

Romelu Lukaku – ST - OVR 85>>86
Serie A looks set to be one of the more competitive divisions this season with Juventus not set to walk it once again. Inter are one of the sides who look impressive and recorded another three points to their total with a 4-2-win over Torino this weekend. Lukaku scored twice and assisted another in that win while also picking up an 8/10 from Gazzetta.

Erling Haaland – ST - OVR 84>>87
All the talk was about Dortmunds wonder kid in Moukoko prior to kick-off but that soon changed towards Haaland who managed four goals during a 5-2 win over Hertha. A performance that resulted in Moukoko only playing five matches. EA has been very stingy on second IF’s this year so far, apart from a very random Lozano but Haaland is without a doubt going to be getting one for this performance.

Cristiano Ronaldo – ST - OVR 92>>93
EA always makes the black Friday TOTW a big one and thus with Ronaldo yet to pick up an IF this year it’s the perfect opportunity for them. The Portuguese striker scored both Juventus goals in their 2-0 win this weekend and picked up an 8/10 from Gazzetta. Usually, I would be on the fence for that one but with it being a BF TOTW I can’t see it not happening.

Hugo Lloris – GK - OVR 87>>88
If there was any doubt about Tottenham being a serious title contender this year, there isn’t now with Spurs recording a 2-0 win over Manchester City this weekend. The IF option is not clear for the game but there will inevitably be somebody included as a result of the win. Lloris looks to be a strong contender making five saves to keep his clean sheet. Alternatively, we could see Dier for his defensive display or even Ndombele for his assist.

Aleksandar Dragovic – CB - OVR 75>>81
Leverkusen looked set to drop points away at Armenia before an unlikely hero popped up in the 88th minute to secure all three points. Dragovic was the man with the late winner and by doing so claimed MOTM with a 2 match rating from Kicker.

Petros Mantalos – CAM - OVR 75>>81
For some reason EA has opted for three assists over three goals on a couple of occasions this year already so when you see a gold midfielder with three assists to his name, he becomes almost a certainty. Despite the league, he plays in. AEK managed a 4-1 win this weekend with Petros assisting the second, third and fourth goals for them.

Cesc Fabregas – CM – OVR 75>>81
Fabregas rolled back the years for Monaco this weekend in their shock turn around 3-2 win over PSG. Monaco found themselves two down at HT but the Spaniard came off the bench to pick up both a goal and an assist to help Monaco take three points. Volland was also magnificent with two goals to his name but looking at recent omissions he is surely too close to his previous IF, leaving the door open for Fabregas.

Jean-Phillipe Mateta– ST - OVR 76>>81
Another Bundesliga striker who excelled this weekend was Mainz’s Mateta. The Frenchman found the back of the net on three occasions during Mainz’s 3-1 away win over Frieburg. There is a lot of competition for strikers this week which does make it hard to fit them all in, but I doubt that a gold hat trick will be ignored.

Yusuf Yazici – ST - OVR 76>>81
The first of a couple of Ligue 1 ST’s is Yazici. Lille ran away with a 4-0 win while hosting Lorient, putting them second in the table, now just two points off leaders PSG. Yazici was involved in three of those four goals scoring twice and assisting another.

Andy Delort – ST - OVR 79>>82
Delort offers yet another Ligue 1 option. A league that continues to see strong options in terms of special items! The Algerian scored twice and assisted another in Montpellier’s 4-3 thriller with Strasbourg. He picked up the joint highest rating of the week from L’equipe with an 8/10

Arnaud Bodart – GK - OVR 71>>78
There were a couple of interesting options for the reserve keeper for unusual reasons but if history has told us anything before it's that when a keeper scores a last minute goal to level the scoring he goes on to gain an IF. It doesn’t happen often but Bodart managed it during the 97th minute to earn ten-man Liege a point via a 2-2 draw with Eupen.

Rodrigo Schlegel – GK - OVR 61>>71
For those that have played FIFA for some time now will remember the time Felipe Melo picked up an IF as a goalkeeper under bizarre circumstances. Well, we could be about to see a similar situation occur after Schlegel’s heroics in a penalty shootout playoff win for Orlando. With Orlando already making the maximum amount of substitutions and their goalkeeper being sent off during the shootout it was Schlegel who ended up in goal and somehow Orlando still managed to progress with Schlegel making a save during the shootout.

Marco Mancosu – CAM - OVR 72>>79
It’s yet to be seen if EA are going to give out IF’s for Serie B with the division being very limited in this year's edition of the game but just like with Del Valle last week this will be a strong indication of what they are going to do. Leece ran away with a 7-1 win over Reggiana on Saturday with Coda scoring three of those seven but it’s Mancosu who I expect to end up getting the nod after providing the assist on four of those seven goals.

Maurice Malone – ST - OVR 62>>72
There were a few options from Saarbrucken’s 3-3 draw with Wehen and when that happens, especially in Germany I will just leave it down to Kicker and go with their MOTM. Malone was named the official MOTM for his hat trick and to make things easier also received POTW with a perfect 1 match rating. Will we see two silver strikers though? That is the only doubt.

Danny Johnson – ST - OVR 59>>69
The English silver IF’s keep on coming with Johnson likely to be the next one to pick up an IF. The main difference is that this one is not going to be particularly good at all. Nevertheless, the Leyton Orient striker scored all three of their goals in a 3-1 win over Harrogate which will inevitably see him included on Wednesday.