At some point in your FUT career it happens.  You pack the most expensive card you ever will and it is all downhill from there.  The issue is, you never quite know when that moment will come and therefore don’t celebrate it with the same vigour as you would had you known.  In the case of Prime ICON Moments Emilio Butragueño I was pretty sure this was my moment and celebrated like any lottery winner would… on the inside… Yes, unfortunately I suffer from premature epackulation (the inability to save packs) and the second FUT Birthday players dropped into packs I was opening my rewards... at work… and therefore had to hide the explosion of emotions that were coursing through my veins, having to settle for a “HSASHASDGAFCB!!!” on Twitter instead.  But, muted celebrations aside I couldn’t believe my stroke of luck and honestly my face probably looked a lot like the dynamic on the card itself as Butragueño graced my computer screen on the web app.  Immediately I was on FUTBIN, checking chemistry styles, building a squad, and preparing for a weekend league under the guidance of The Vulture once more.  With the application of the HAWK chemistry style, Butragueño took his position at striker in the 4-3-1-2 and terrorized keepers all weekend in the following squad: 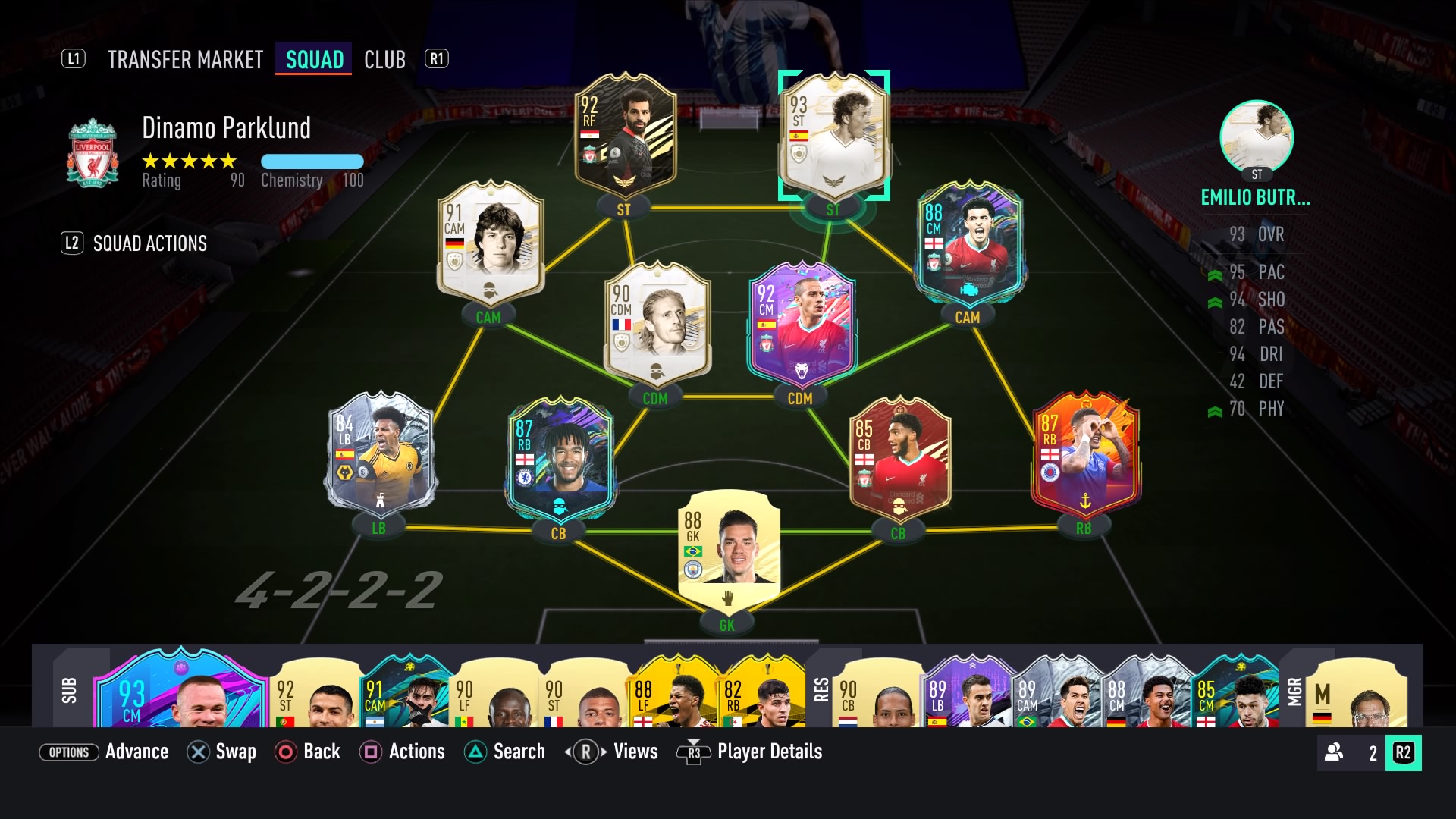 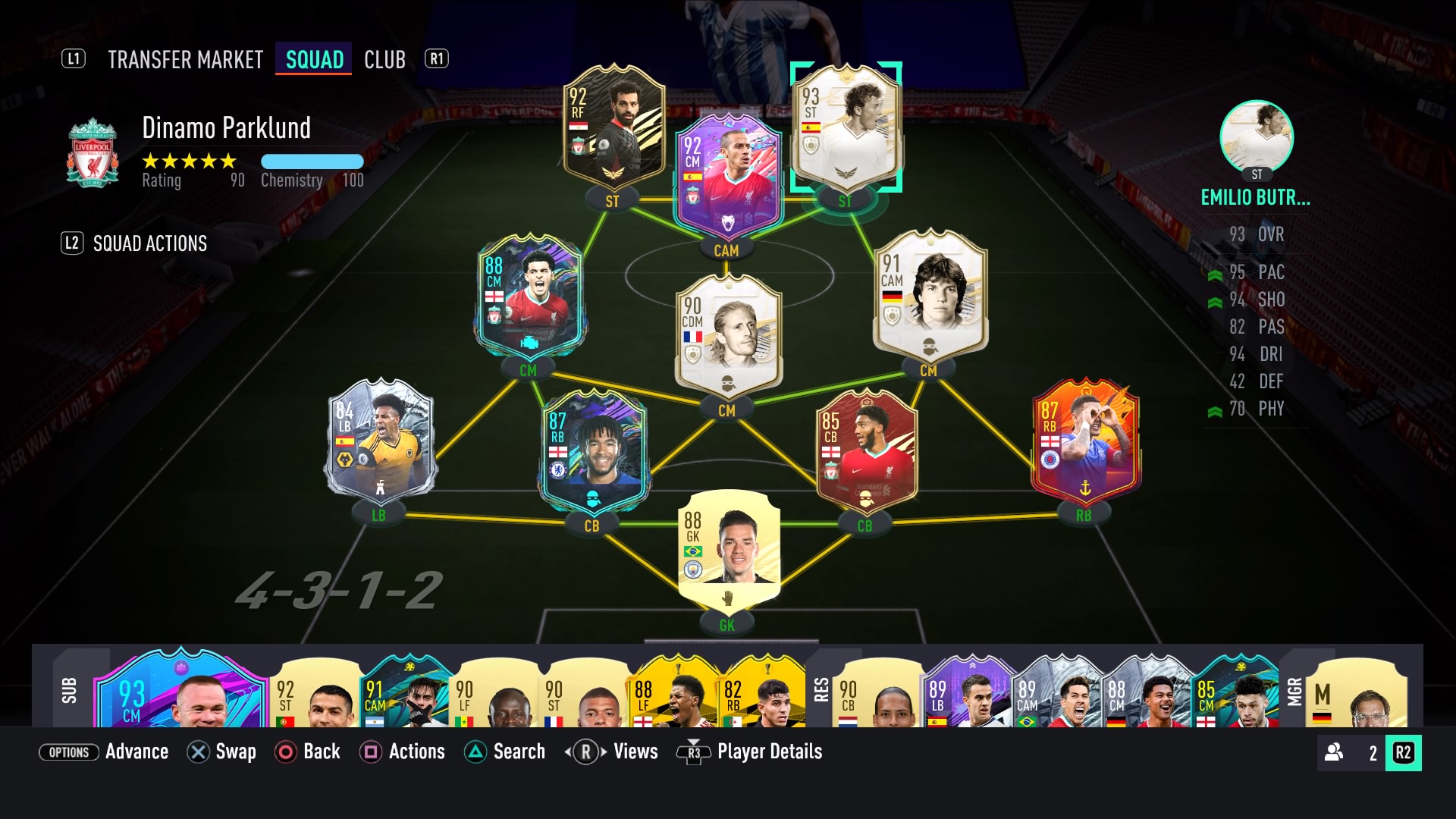 I told myself before this review that I owe it to you guys to sell this card after it was completed no matter how well he performed.  The influx of coins will allow me to do even better reviews of more expensive cards on both FUTBIN and YouTube (channel: MaeNine) and therefore it has to happen.  It is a good thing I decided before, as after one match I was already trying to justify keeping him.  I can’t deny that a few tears were shed when I woke up to the green checkmark, knowing that this lad would not be captaining the ship this weekend.  People talk about players fighting for the badge in FUT and Butragueño went to war for the club this weekend.  The key goals, brilliant link up play, surprising strength & headers won (yes, he does this too) were just a small list of what this legend brought to the table… and the fans of Dynamo Parkland will be signing his name long after he is gone.  With a nickname like The Vulture it might suggest a player who feeds on scraps… but with Butragueño this weekend “he was the danger! He was the one who knocks!”

99.  That is all you need to know when discussing the Shooting statistics with Butragueño… and I can tell you for free there is no exaggerating with these numbers.  99 POSITIONING, 99 FINISHING, 99 SHOT POWER, 99 LONG SHOTS & one blemish with 89 VOLLEYS.  I do feel like the 36 goals in 20 matches speaks for itself… but I should note that in those same 20 matches Butragueño had 15 MVPs and it just speaks to the overall positive involvement that Butragueño had across 90 virtual minutes.  Perhaps the biggest eye opener was just how lethal a card can be from distance in this game with the right mixture of statistics.  In fact, I found myself having to remember in key matches that I don’t have to be on the 6 yard box to score with this card… just let it fly and plan out the celebration.

The 3 STAR SKILLS are going to be a factor that eliminates Butragueño from many FUT Managers plans, regardless of his many talents.  However, as a player that has always relied on quick, responsive, agile movements to create space… I was literally in heaven with this card.  Butragueño’s dribbling is a lot like his shooting in the all 90 medley of talents… 93 AGILITY & 92 BALANCE the most notable.  The agility is key to keeping would be tacklers at arms length as Butragueño feels like he is floating on air when changing directions.  Like Pac-Man from ghosts you simply change direction and the response is abrupt and instant.  The 99 ACCELERATION takes over at this point and a dart of speed has Butragueño into space with time to lay off the ball or have a hit with his cannon-like shooting.  Even better, once you have the space you can exploit it with the 99 SPRINT SPEED that certainly performs to expectations.  But, if your opponent magically does get close enough, the 71 STRENGTH & 92 BALANCE still make this card a nightmare to dispossess (as the video demonstrates on a few goal occasions).

For 2.35 million coins you had better produce at an astronomic level… and Butragueño was on a different planet for the majority of this review. I have gone over almost all of the qualities balled up in this mini-magician, but there is even more. This card is a serious threat in the air… and the corner from my video is only a sneak peak.  Butragueño also performed admirably when called upon as a target striker… holding up play, knocking down important headers, hounding defenders for the ball… if it happened this weekend and was positive, chances are Butragueño was playing a bigger part than you could imagine in my success.

Honestly, I think it will come down to the 3 STAR SKILLS that will leave many wanting more with this card.  Truthfully, it might be the reason that this card is not in the 3 million coin range based on everything else that I experienced this weekend.  In the end I won’t pretend that the passing with this card was perfect either.  I don’t mean that the passes missed their targets and overall Butragueño did everything you could ask for when distributing the ball.  However, we have all used those players that simply add a bit extra and immediately their passing is noticeably better than simply A to B targeting.. and Butragueño does not fit this category, despite not making any memorable mistakes throughout the review.

This was not a review that I had imagined as the FUT Birthday squad dropped into packs.  Thiago and Vardy were my likely choices and then one Jumbo Player Pack changed everything.  While I realize a card of this value is not obtainable in all cases, I will say that if you can squeeze together the funds this is an absolute wonder-card that leaves you wondering if he will ever miss.  Definitely the most satisfying finisher I have used this FIFA… and perhaps any FIFA, it was uncanny how consistently Butragueño found ways to bulge the twine.  Overall, I think this rating and review was inevitable.. but I didn’t think I would enjoy it this much.  Now that Butragueño is gone I have to draw on Dr. Suess to move forward, “don’t cry because it is over, smile because it happened.”  I hope you are all safe and well, I appreciate you more than you know.  Cheers for reading. 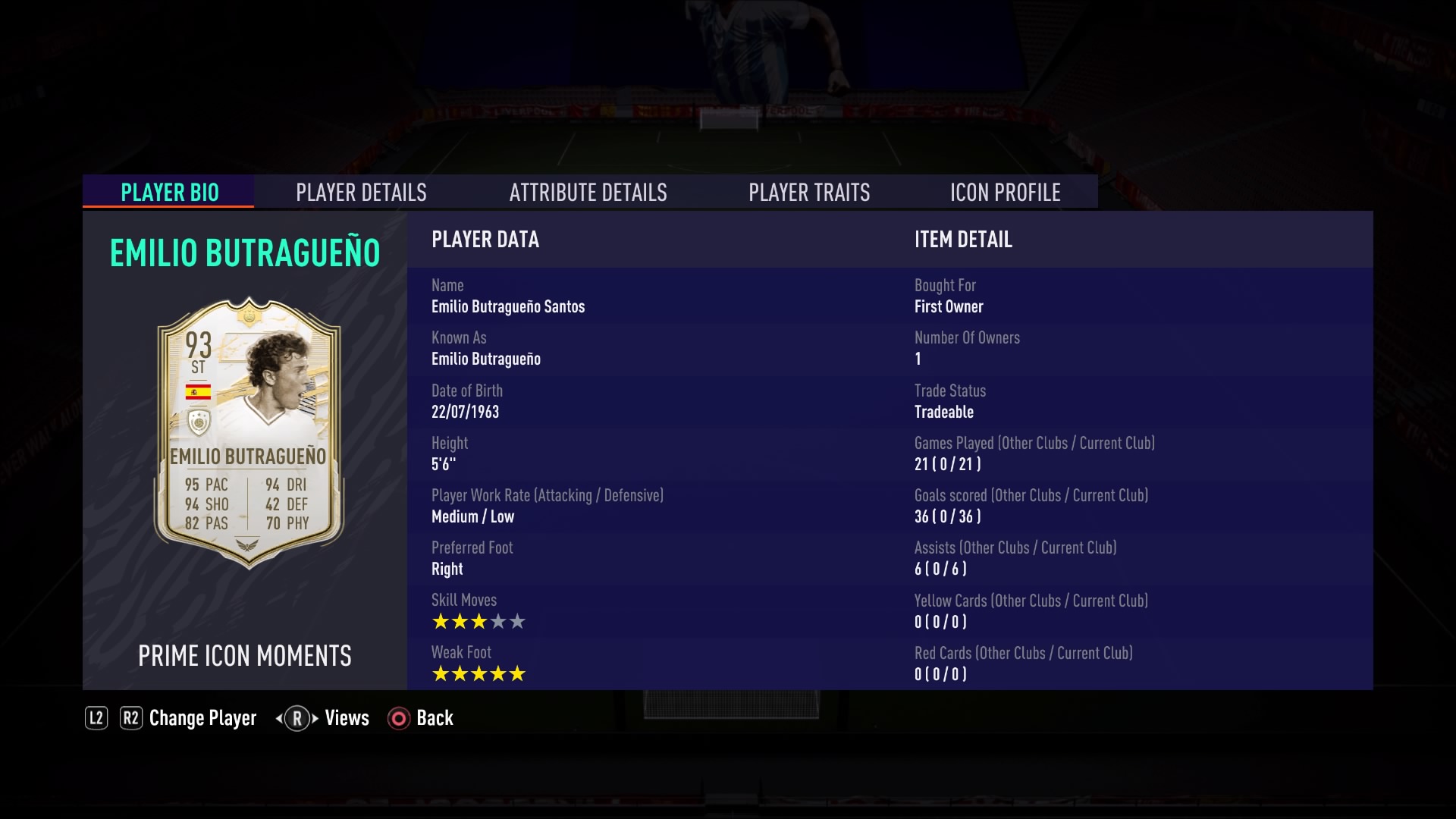