You know a card in FUT has become a problem when the players themselves take to Twitter to beg for mercy from their own digital doppelganger.  If you don’t know the context, at the drop of FUT Birthday Team 2 last week Ryan Kent tweeted “We Really Doing This Again @EASPORTSFIFA!?” after laying eyes on his new and improved upgrade.  Truthfully, there was a ton of nostalgia surrounding Team 2 and depending on your experience could have left you with a satisfactory return to glory… or PTSD flare ups.  Regardless of where you stand on the squad, it is undeniable that there were some absolutely fantastic options that have now made their way into the Weekend League circulation.  For myself, it just had to be Kent that I reviewed this weekend.  On December 18, 2019, an 82 Kent was available alongside Forrest in a “choose one” SBC… and due to his Liverpool ties, I went for Kent.  From there on December 23 I reviewed 94 SIF De Bruyne and sitting on the bench was a bright and shiny 82 rated Kent.  Flashforward to March 3, 2020, in a review of 90 ShapeShifter Richarlison and you would spot an upgraded 84 Kent (crazy to think that our lives were slowly changing forever at this point). Finally, a look at an 89 Eusebio review on July 28, 2020, reveals an 87 version of Kent… All along the way, squad after squad featured the Rangers frontman as a super-sub as he ended with the most caps of any player for me in FIFA 20.  Needless to say, I had a lot of good memories coming into this review and hoped that FUT Birthday Kent could live up to my extremely high expectations.  With the application of the DEADEYE chemistry style, I deployed Kent as a striker in my 4-3-1-2 formation and dove head first into the murky waters of the Weekend League grind.  Ryan Kent was the icing on the cake all weekend in the following squad: 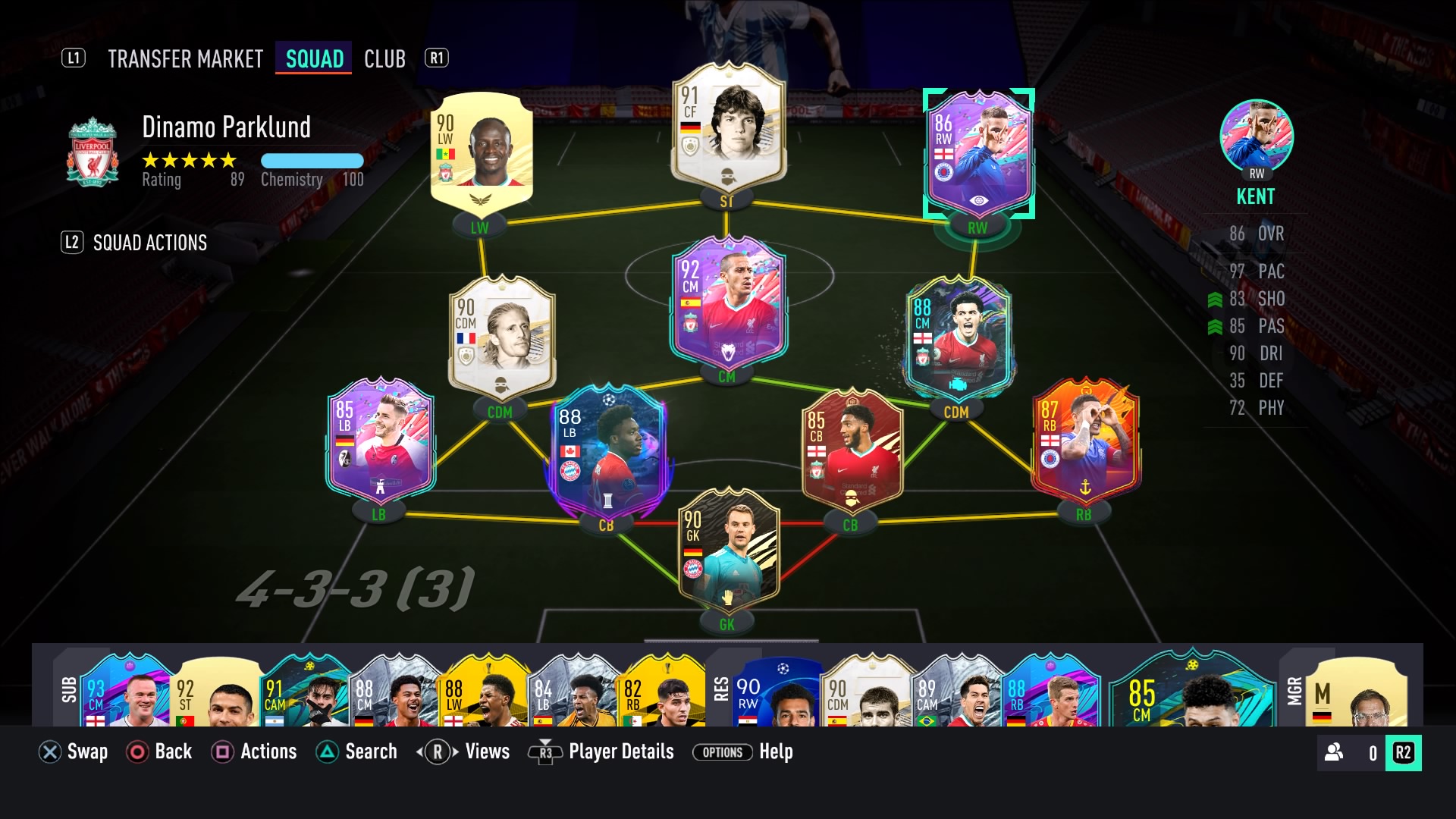 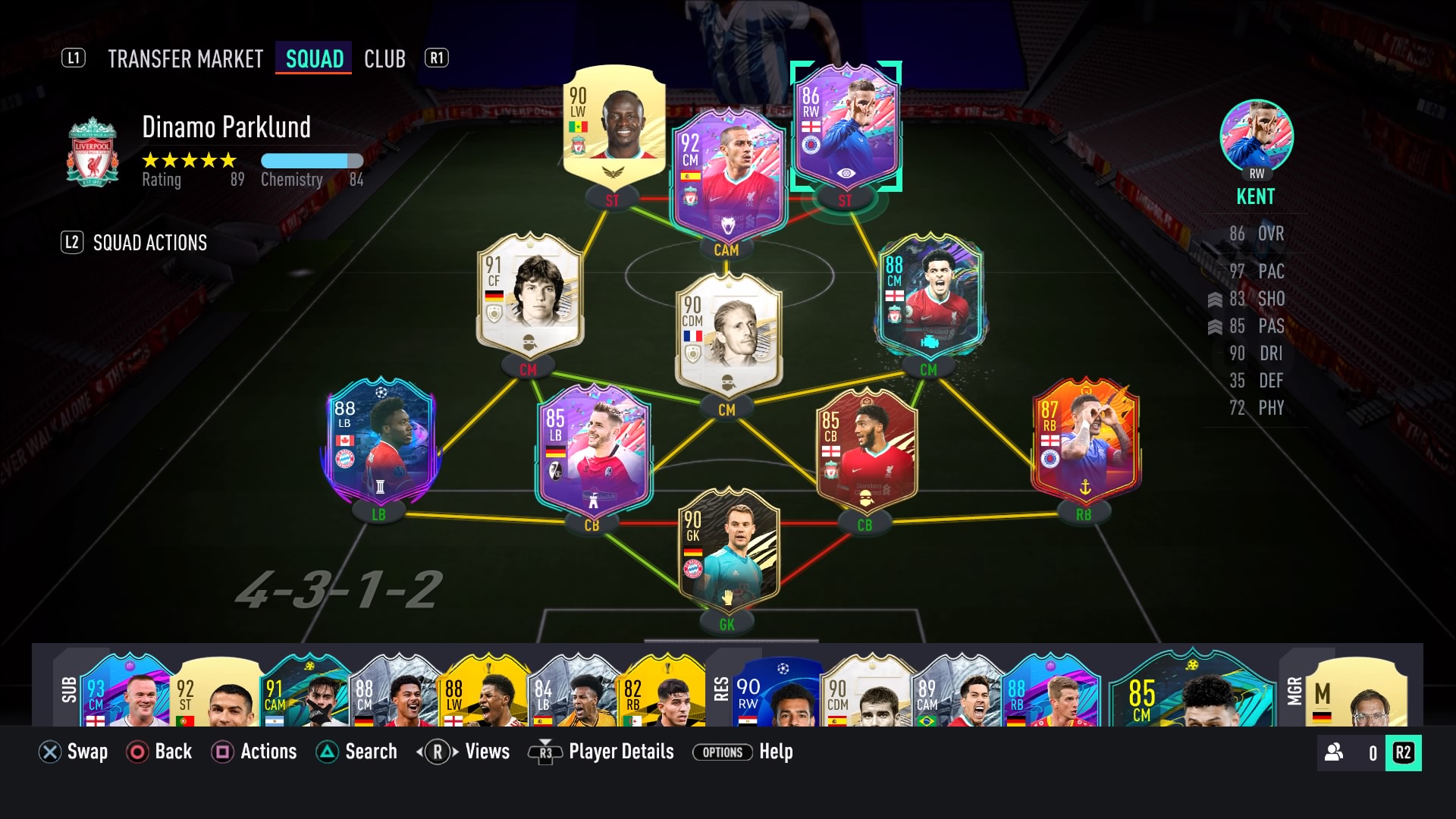 I’m not mad, just disappointed.  Maybe disappointed isn’t quite the word, but in the end, I am not sure that Ryan Kent managed to meet the incredibly high standard that his RTTF card did in FIFA 20.  In all honestly, I am not sure what I was expecting.  Did I think that an 86 rated card was going to score 3 goals per game and take me to my first ever Elite 1 finish? Was he going to score at will and leave behind a trail of rage quits as long as Tottenham’s trophy drought?  In the end, I think I set this card up to never reach the incredibly ridiculous expectations I had set, but stepping back and looking at the card overall, there were certainly some amazing bright spots while at the same time concerning trends that need to be discussed if you are going to put your hard earned coins into this Meta warrior.

With an increase to the 5 STAR SKILLS, the already intimidating 98 ACCELERATION & 97 SPRINT SPEED, the bordering on ridiculous 97 AGILITY & 98 BALANCE, and the LEAN body type on a 172 cm | 5’8 card there was zero chance that this card wouldn’t dance on the ball.  At one point after a self created goal where Kent had my opponents on skates, I swore I could hear Thé à la Menthe playing in the crowd as Kent reproduced the famous Ocean’s Twelve movie scene.  In general, this was the experience all weekend long as Kent has some of the snappiest dribbling I have used in FIFA 21.  The card is responsive, the cuts and turns are abrupt, and the acceleration out of the dribble is borderline unfair.  Who needs the bridge dribble when a player can explode out of the gates like a 100m Olympic sprinter?  However, the only drawback in all of this was a noticeable drop off in Kent’s top end pace.  I just felt that he didn’t quite have the 97 SPRINT SPEED that he comes advertised with… but maybe it is for the best considering the worldwide controller shortage already.

This came as a shock if I am honest.  With a 5 STAR WEAK FOOT, 97 FINISHING, 94 SHOT POWER & 91 LONG SHOTS I just expect a pure 10/10 shooter using Kent.  While it is true his finishing is quite good and overall I was rewarded from decent build-up play… there were one too many moments where clear cut chances went astray.  Interestingly Kent was deadly lethal outside of the box with his finesse shots despite the absence of the trait… yet then two minutes later would miss a sitter from inside the six.  A 40 goal weekend was not outside of this card's abilities had Kent been more clinical in both the passing and shooting departments.  Maybe the most interesting is the 49 VOLLEYS that I had to double and then triple check as I just could not believe it.  In the end, a solid finisher, but I wouldn’t call him a lock, which hurt his rating.

Based on hype alone I expected this card to hit one million coins and so his 700k price tag feels low.  However, when you consider the fact that FUT Birthday Moses Simon is currently valued at 38k and has a great deal in common with Kent, it becomes obvious just how much of a premium nostalgia can cost.  Don’t get me wrong, Kent is fantastic. But a 400k evaluation would seem way more accurate given his drawbacks.

When you are quick, you can get away with certain flaws and that couldn’t be more true for Kent.  At one point during the review, I started really noticing an issue with Kent’s link-up play.  Pass after pass led to possession lost despite a 99 SHORT PASSING rating.  Even more curious was the whopping 10 assists in 20 matches… an excellent return.  In the end, it was the pace.  Kent was able to get into areas that didn’t require ultimate precision and his ability to provide tap-ins for teammates was excellent. Similarly, the pace patched over the cracks of a very physically weak card.  While Kent didn’t win many 50/50 challenges… there were not many defenders who got close enough to tackle Kent in the first place.

All good things must come to an end… and after walking down memory lane with Ryan Kent this weekend, the time has come to sell and move on.  If you can’t tell, I am not as sad about it as I thought I would be.  The card is fantastic… the 9/10 rating speaks to that.  Yet, he wasn’t outstanding… and that is my overall verdict.  If you buy this card he will win you matches and move in ways you might not have thought possible with left stick dribbling alone. However, there will come a time when you realize after a missed pass, or missed chance, that this card is truly the icing on the cake…  a luxury item, but not a must have.  My recommendation… absolutely take this card out for a spin, he is fun, and that is what FUT should be.  However, I wouldn’t go building a squad around him, there are just one too many chinks in his armor to be the main soldier in battle.  Hoping you are safe and well.  Cheers for reading. 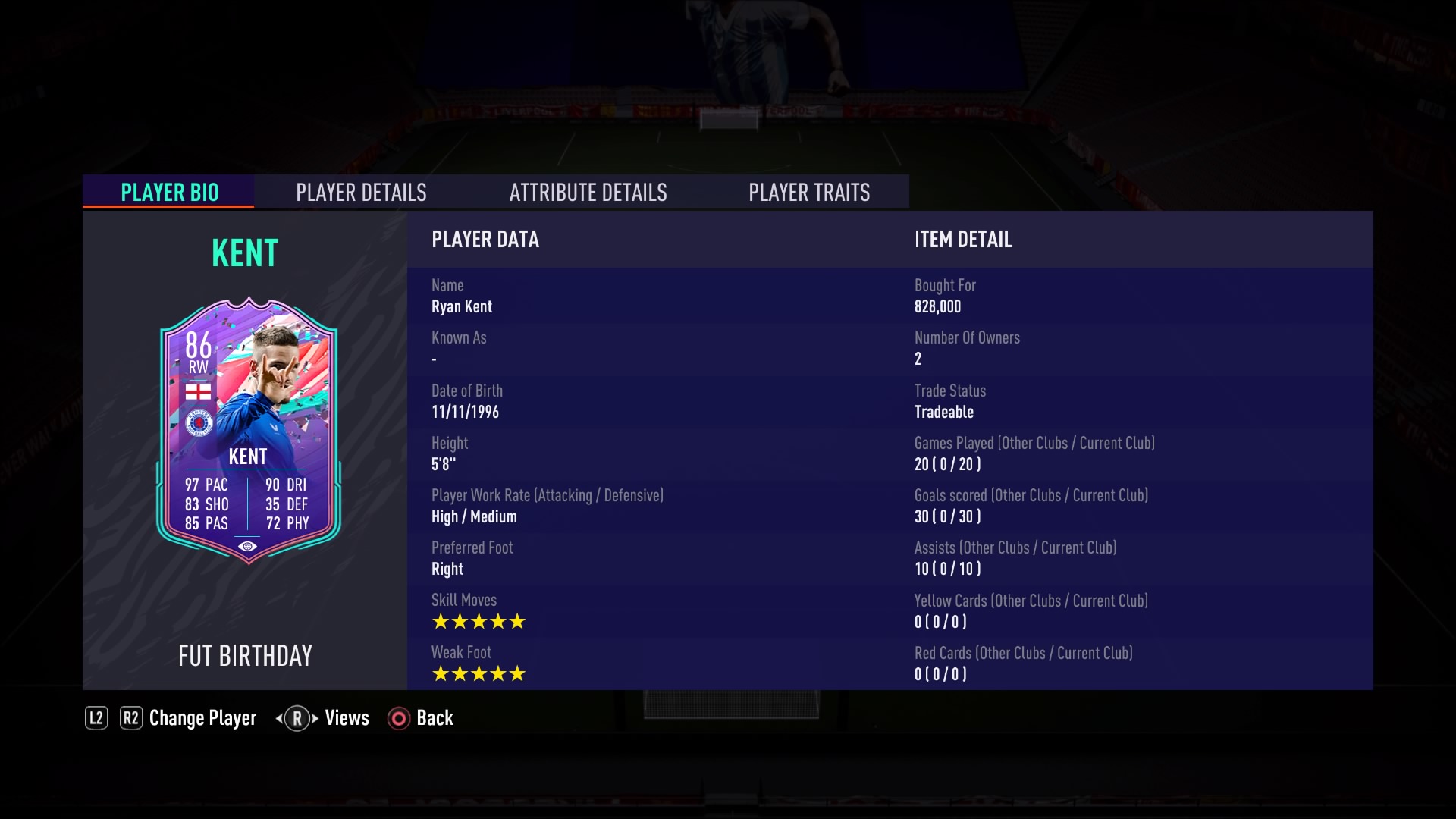