With no Bundesliga this weekend there were only Premier League dilemma’s when it came to including players coinciding with TOTS, which is the reason I have not included Bale or Son. As for TOTW 32 there are some gems included with potential IF’s for Militao, Marquinhos and Depay, alongside a late upgrade for OTW Havertz. 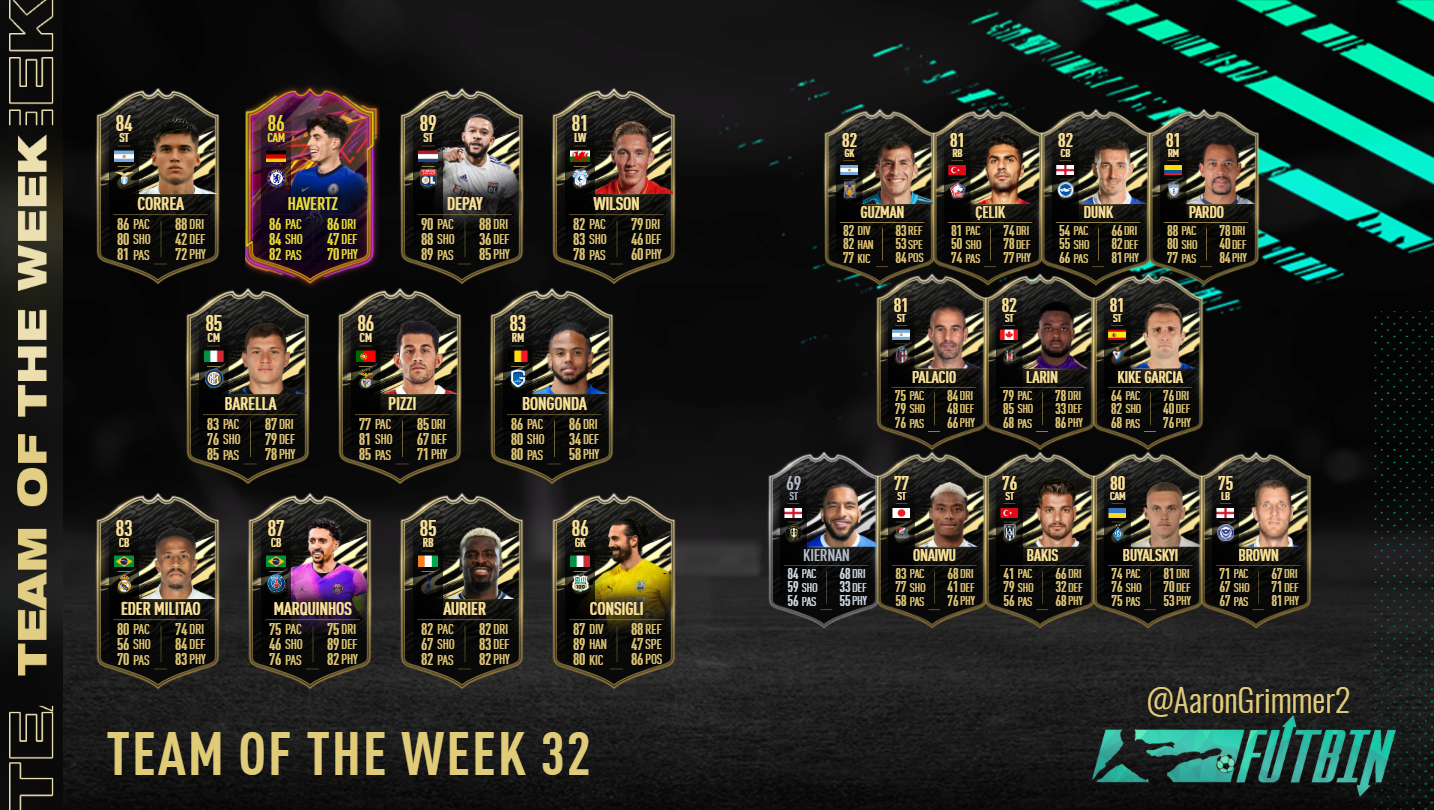 Andrea Consigli – GK - OVR 81>>86
Although Consigli conceded during a 1-1 draw with Atalanta his performance still stood out enough for him to be included in TOTW for me. The Italian has been superb all season for Sassuolo but for this particular match, he managed six saves alongside a late denial of Muriel from the spot. His performance saw him claim MOTM with a 7.5 and although Italian keepers are usually difficult to predict I am confident on this one.

Eder Militao – CB - OVR 80>>83
Militao was once hyped up to be the next big thing in terms of defenders but the Brazilian is yet to live up to the hype at Madrid, failing to secure himself a permanent spot at the back. He did play a big role in Madrid’s latest win though, scoring the opener in a 2-0 win over Osasuna as the title race remains as tightly contested as ever.

Marquinhos – CB - OVR 85>>87
With the Ligue 1 TOTS likely to be the final side of the big five leagues I think there is enough time for players likely to feature in that side to still receive another IF this week. Thus, we have Marquinhos, who scored one of PSG’s goals during a vital 2-1 win over Lens, allowing them to maintain the chase on Lille.

Serge Aurier – RB - OVR 80>>85
Had Bale not have received a flashback SBC earlier this week then he would have been included in this side after he performed magnificently against Sheffield United, scoring three times from the wing, showing glimpses of his previous form for the club. Instead, we look elsewhere and with Son also in TOTS it leaves Aurier. The Ivorian assisted two of Bale’s goals alongside helping keep a clean sheet.  Which with a lack of PL options really should be enough to see him claim in SIF

Theo Bongonda – RM - OVR 74>>83
Thankfully, with Bongonda already receiving an IF he goes down as a gold card when creating this side. As a result, it makes him significantly easier to fit into the side. The Belgian was crucial for Genk in their 3-2 away win, scoring two of his own alongside providing the assist on the other. A result that gets Genk off to winning ways in their championship group.

Pizzi – CM - OVR 84>>86
Pizzi was deployed in a central role this weekend rather than out wide for Benfica and it was a role he adapted well to, scoring once and assisting another as Benfica went on to win 2-0 away at Tondela. Abola awarded Pizzi an 8/10 and although EA is seemingly moving away from that source with a lack of midfielders this week, I can’t see Pizzi missing out.

Nico Barella – CM - OVR 80>>85
Inter Milan finally officially confirmed the Serie A title with their 2-0 win over Crotone giving them a 13-point lead with just four games remaining and thus ended Juventus’s nine-year streak at the top. There was no clear-cut option for this IF but with Barella claiming MOTM for his assist it seemed logical for it to go his way. Barella has played a huge role for Inter this season and with just one IF to his name to date, another is no more than he deserves.

Harry Wilson – LW - OVR 77>>81
You never really know what to expect when you get two sides with nothing left to play for in the final games of the season with matches having more of an exhibition vibe to them. Cardiff came out with a professional 4-0 victory away at Birmingham this weekend though with Wilson showing exactly what he is capable of by scoring three of those four

Kai Havertz – ST - OVR 85>>86
With Tuchel beginning to show his frustration with Werner he opted to play Havertz in the more attacking role this weekend against Fulham. Werner will now have more issues coming his way as Havertz managed to find the back of the net twice. His performance is likely to reward those who obtain his OTW card as I fully expect an upgrade to come his way on Wednesday.

Memphis Depay – ST - OVR 85>>89
Depay has been outstanding for Lyon this season and could have easily had 6 or 7 IF’s to date. With just a goal and an assist, it is perhaps a tad generous to award Depay his fourth IF but with it being a big game against Monaco and the fact L’equipe awarded him an 8/10 I can see him sneaking in. The enthralling game was perhaps tainted by some late drama that saw no less than four red cards shown but ignoring that it was a fantastic spectacle.

Joaquin Correa – ST - OVR 81>>84
Despite a late attempt at a comeback the damage Lazio done earlier in the match was enough to see them come away as 4-3 winners. Correa scored two of those four goals and claimed MOTM from Gazzetta with a 7.5, helping to continue Lazio’s late burst of form to claim a European spot.

Nahuel Guzman – GK - OVR 79>>82
The substitute keeper was not an easy selection this week with keepers as a whole offering very little. Guzman is seemingly the best of a bad bunch but with the Argentine playing in Mexico, it provides a lot of doubts about whether or not EA will opt to include him. Performance wise he played well though, making eight saves in total in order to keep his clean sheet during Tigres’s 0-0 draw with Guadalajara.

Mehmet Celik – RB - OVR 77>>81
Lille continued their strong form with a 2-0 home win over Nice, which sees them remain one point clear at the top of the table with just three games remaining. So far, they seem to be handling the pressure well, but the pressure is seemingly going nowhere. Celik scored one of their two goals during the latest win with L’equipe awarding the Turkish defender a 7/10.

Lewis Dunk – CB - OVR 78>>82
There were only a few PL options this week, which was not helped by the current TOTS promo but regardless of that we always see several players from the Prem make it with some being rather questionable at times. Brighton practically secured their safety this weekend with a 2-0 home win over Leeds and although he didn’t provide anything offensively Dunk’s defensive display really stood out. So much so that he was awarded a 9/10 match rating. Something which doesn’t go unrewarded very often.

Felipe Pardo – RM - OVR 75>>81
Another random RM likely to appear in TOTW 32 is Pardo. Pachua recorded a comfortable 5-1 away win over San Luis with several players getting their name on the scoresheet. It was the assists that stood out though with Pardo claiming three of the five. With the Colombian also being gold, he should have no trouble making the side on Wednesday.

Rodrigo Palacio – ST - OVR 75>>81
Palacio is approaching the end of his career with the Argentine now 39 years of age so to still be playing at the top level is a testament to his ability and fitness levels. He rolled back the years this weekend though, scoring three times for Genoa in their 3-3 draw with Fiorentina with Palacio going on to claim POTW in Italy.

Cyle Larin – ST - OVR 72>>82
One of the easiest selections this week came from Larin with the Canadian striker scoring four times, with Besiktas beating Hatayspor by the comfortable scoreline of 7-0. The Turkish side is now just a couple of points away from officially claiming the title, denying both Fenerbache and Galatasaray.

Kike Garcia – ST - OVR 77>>81
Although Eibar currently sits bottom of the La Liga table a comfortable 3-0 win over Aalves gives them fighting hope. They are now just four points from safety with four games to go. It was Kike Garcia who gave them the hope they needed, scoring all three goals in their latest win. It’s a big match against Getafe in their next fixture from which a loss would probably secure their fate.

Lee Brown – LB - OVR 65>>75
There were a few ELL options for TOTW 32 which could stand in Brown’s way should EA want to limit the amount included, as Brown would probably be the weakest of the three, I have selected but EA has been consistent with including defensive options in the reserves this year and thus Lee Brown is a strong contender. The English LB scored two of Portsmouth’s three goals in their 3-1 win over Wimbledon, a result which means the final playoff position is theirs to lose going into the final game of the season.

Vitaliy Buyalskyi – CAM - OVR 74>>80
There were a couple of strong contenders from Kyiv’s 5-1 away win over Vorskla with Kyiv looking likely to make it back-to-back weeks with an inclusion in the side. Buyalskyi scored three times from CAM which for me makes him the favourite for the IF but Karavaev also stands a chance after providing three assists from RM.

Sinan Bakis – ST - OVR 67>>76
EA actually surprised me last week with their exclusions of both Bundesliga and Ligue 1 hat tricks but thankfully there are not as many to fit in this week and thus those who scored three are likely to end up making the cut. Bakis is one of those players, scoring three of Heracles’s four goals in their 4-0 win.

Ado Onaiwu – ST - OVR 69>>77
Another player with three goals was Ado Onaiwu, whose three came away at FC Tokyo during Yokohama’s 3-0 away win. Yokohama looks to be a real contender in the J-League this season having only lost one game from their opening eleven matches.

Brendon Kiernan – ST - OVR 59>>69
Harrogate had nothing to play for while hosting Cambridge who had promotion on their minds. It ended up being a nine-goal thriller of which Harrogate ended up coming out on top of. It means Cambridge now needs a result from their final fixture to secure automatic promotion. As for Harrogate, it looks as though they will pick up their first IF of the season with Kiernan scoring three of those five goals