I bet no one saw this review coming… but in all reality, if you have followed my reviews at all in the past, or on Twitter: MaeNine_  … then you would know that with the lone LFC player in the mix it was always going to be Mo.  One thing that did come as a shock with the EPL TOTS has to be the ratings and overall statistics.  They really did not juice these cards as they have done in the past, and some of that definitely played a role in my experience this weekend.  The gameplay was sluggish, the teams were cracked, the formations were sweaty and really provided a true test for every card in the squad.  In the end, we will review the 20 matches played, but it is worth noting that Salah played out the final 10 matches in my WL YouTube Series (search: MaeNine) and it is quite hard not to let those final events in the race for Elite take over this review.  Another difficulty this weekend came in the form of the chemistry style as the ridiculous amount of attacking power that Salah already has made the right selection difficult.  In the end, we jumped at the SNIPER chemistry style, which is certainly an often neglected choice, yet suits Salah perfectly.  One area that was not up for debate was the formation where again we went for the 4-2-2-2 after our recent tactics review and success last weekend; playing Salah as the Left Striker I was hoping that lightning could strike twice and lead us to the Elite promised land.  Mo Salah was running down the wing all weekend in the following squad: 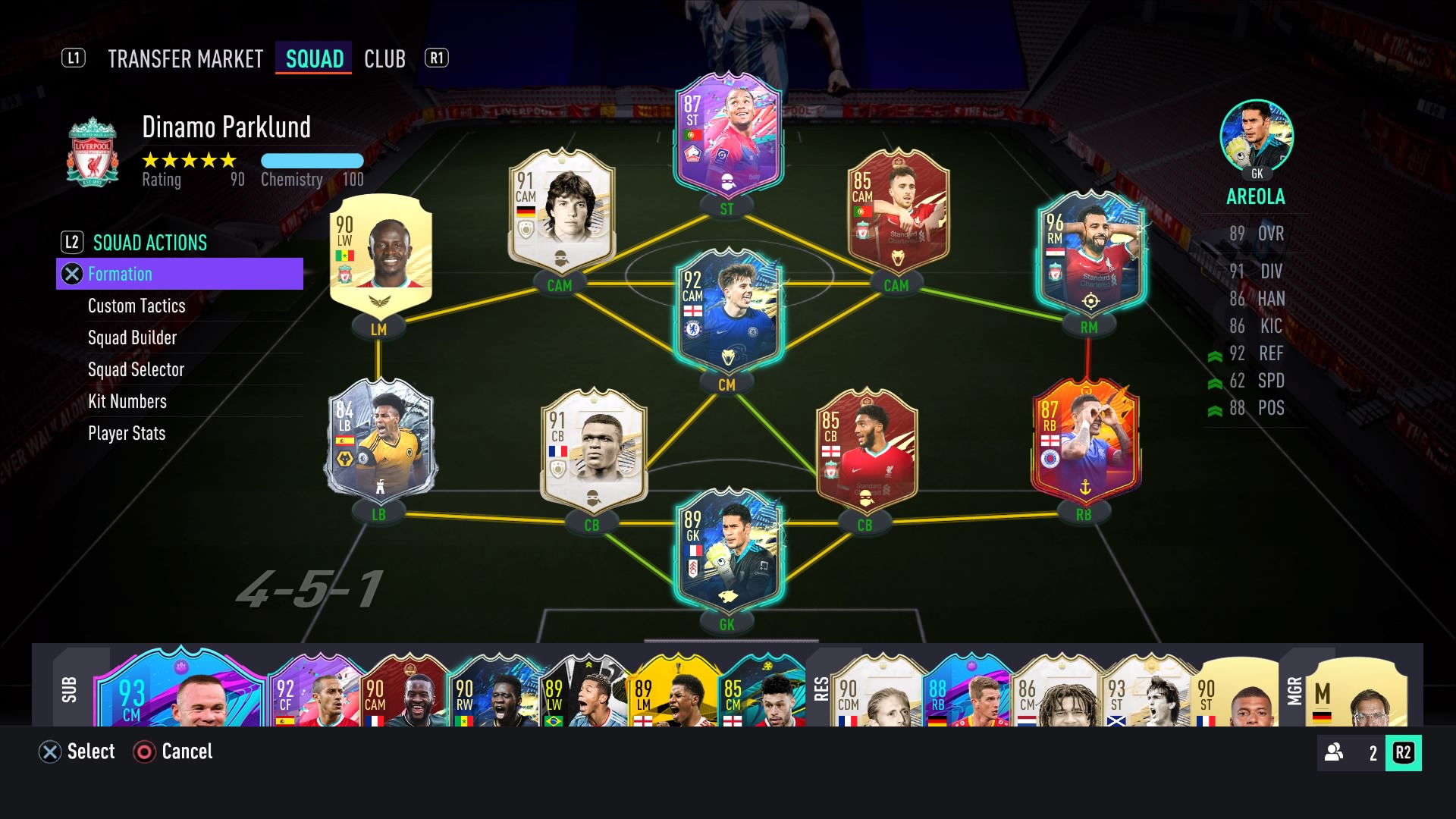 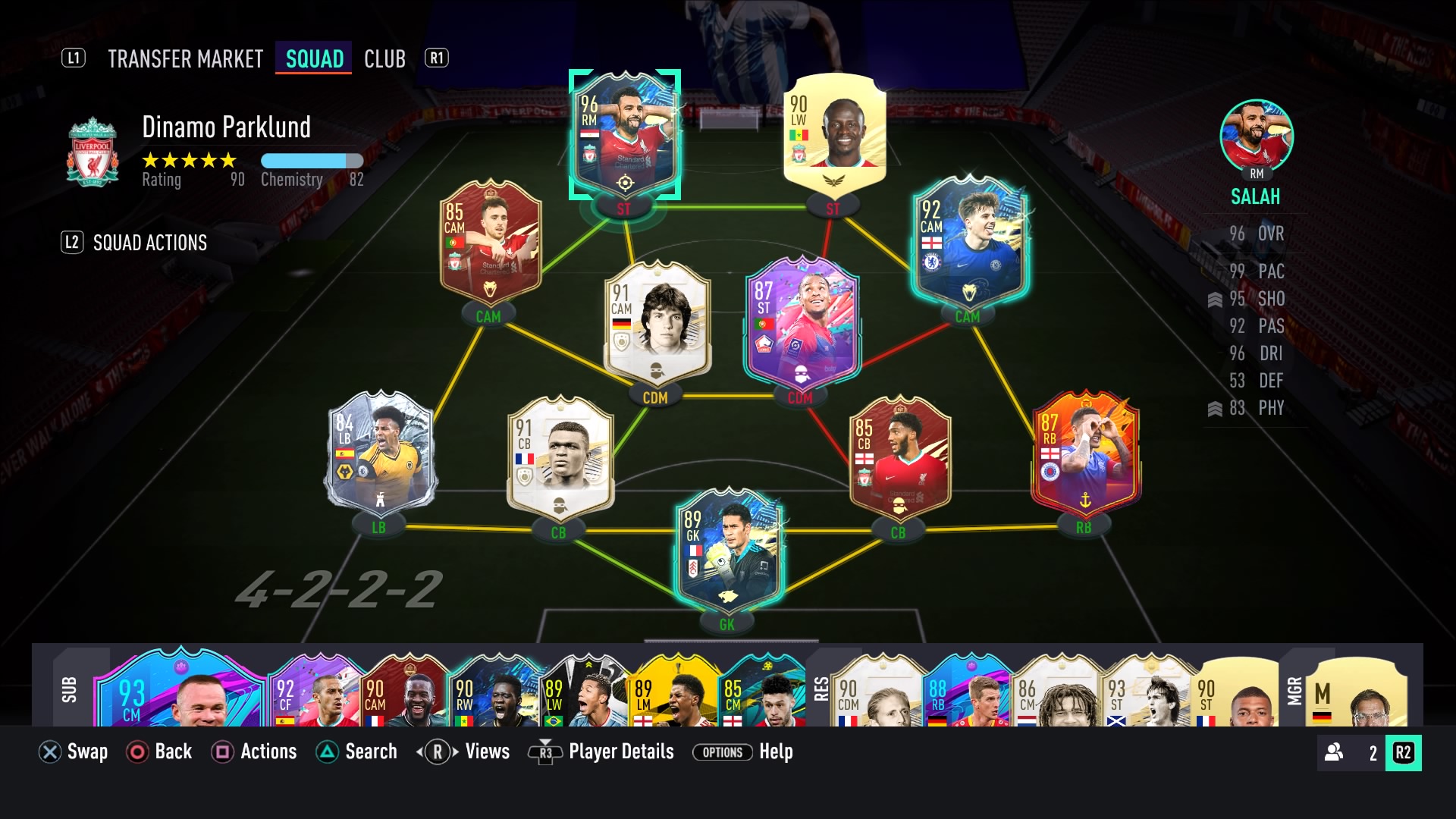 For those that have followed me this year you would know that I love, love, love RTTF Mo Salah.  The card is and was everything that you would want in the FIFA 21 meta and certainly fits into my playstyle perfectly.  With TOTS Salah my expectations were through the roof which ultimately jaded a lot of what I experienced this weekend with this card.  I am not exactly sure what I thought I was getting with TOTS Salah… but in the end, I can tell you that this was not it.  I realize it is confusing to read such a negative tone for a 9/10 rated card, but it was the way that we arrived at this rating that will leave bad memories about this experience for some time.

I have not really combined these two categories all year but with Mo Salah it was 100% necessary to paint the picture of why this card received a 9/10.  Truthfully, I found the Pace, Shooting & Physical statistics to be fraudulent with this card.  I realize that some of this was down to gameplay and the sweaty demeanor of my opponents, there is no denying that. However, when I needed a hero this weekend it kills me to say that it just didn’t feel like Mo Salah would be it.  In saying all of this my point is that Salah would have been an 8.5/10 in my eyes if not for these two categories.  There is no denying that Salah is a sorcerer on the ball… no matter the gameplay he just feels incredibly responsive and the base 97 AGILITY & BALANCE are scary accurate.  Everything working together ensures that Salah creates an insane amount of space on the dribble and this should have translated into a ton of goals and assists throughout the weekend.  Unfortunately, it was only the latter that truly materialized as Salah accumulated an impressive 14 assists.  The time and space mixed with the 95 SHORT PASSING ultimately proved too much for the majority of opponents and allowed Salah to facilitate a lot of what I did well this weekend.

1.3 million coins is simply too much to pay for this card at this point in the cycle.  With RTTF Salah sitting at 820k I would have said 1 million or even 1.1 million is fair for this version of the Egyptian… but 1.3 is just simply too steep after what I experienced this weekend.  Maybe the most interesting discovery was the fact that RTTF Salah has always felt like he had a hidden 4 STAR WEAK FOOT when I have used him in the past.  Yet, with TOTS Salah it was as if he had regressed to his original 3 STAR rating.  The insanity of his 99 POSITIONING, FINISHING & LONG SHOTS … mixed with the 98 SHOT POWER & 97 VOLLEYS just simply could not overcome the deficit and left me scrambling for those left footed finishes all weekend.  While the FINESSE and OUTSIDE FOOT traits were breathtaking on the left… they were truly painstaking on the right.

I have been saving this until now as I feel ridiculous even typing it… but with 99 ACCELERATION & 99 SPRINT SPEED, this card doesn’t feel fast.  There I said it.  Yes, he is quick, lightning quick in fact.  But in those straight line sprints I just could not get over how many races I lost with Salah on the ball this weekend.  This led to more and more tackles from the shoulder to shoulder position, and despite the 88 STRENGTH it was simply game over from there as my opponent walked away with possession.  I am hoping this is a general experience with this card, or maybe I truly was having a terrible gameplay experience? But all in all this card simply did not come as advertised.

It absolutely kills me to say that unless you are a LFC fan, an Egyptian squad connoisseur, or were lucky enough in picks/packs to get this card untradeable… It is a pass for me.  Don’t get me wrong… 25 goals and 14 assists is a fantastic return.  But it was the last 10 games that really started to turn me more and more away from this card… and while I realize this is not directly a part of this review… it was certainly an eye opener watching Salah try and operate against the sweatiest of opponents with the more expensive squads.  There were moments though.  Moments where Salah felt unstoppable and capable of bringing opponents to their knees… only to be followed with the frustration of a missed finish or lost foot race that never should have happened.  Let me know if this has been your experience with this card… and please don’t forget to join the giveaway from myself and FUTBIN on Twitter as I would love for one of you that follow the reviews to win and benefit.  Hoping you are safe and well.  Cheers for reading. 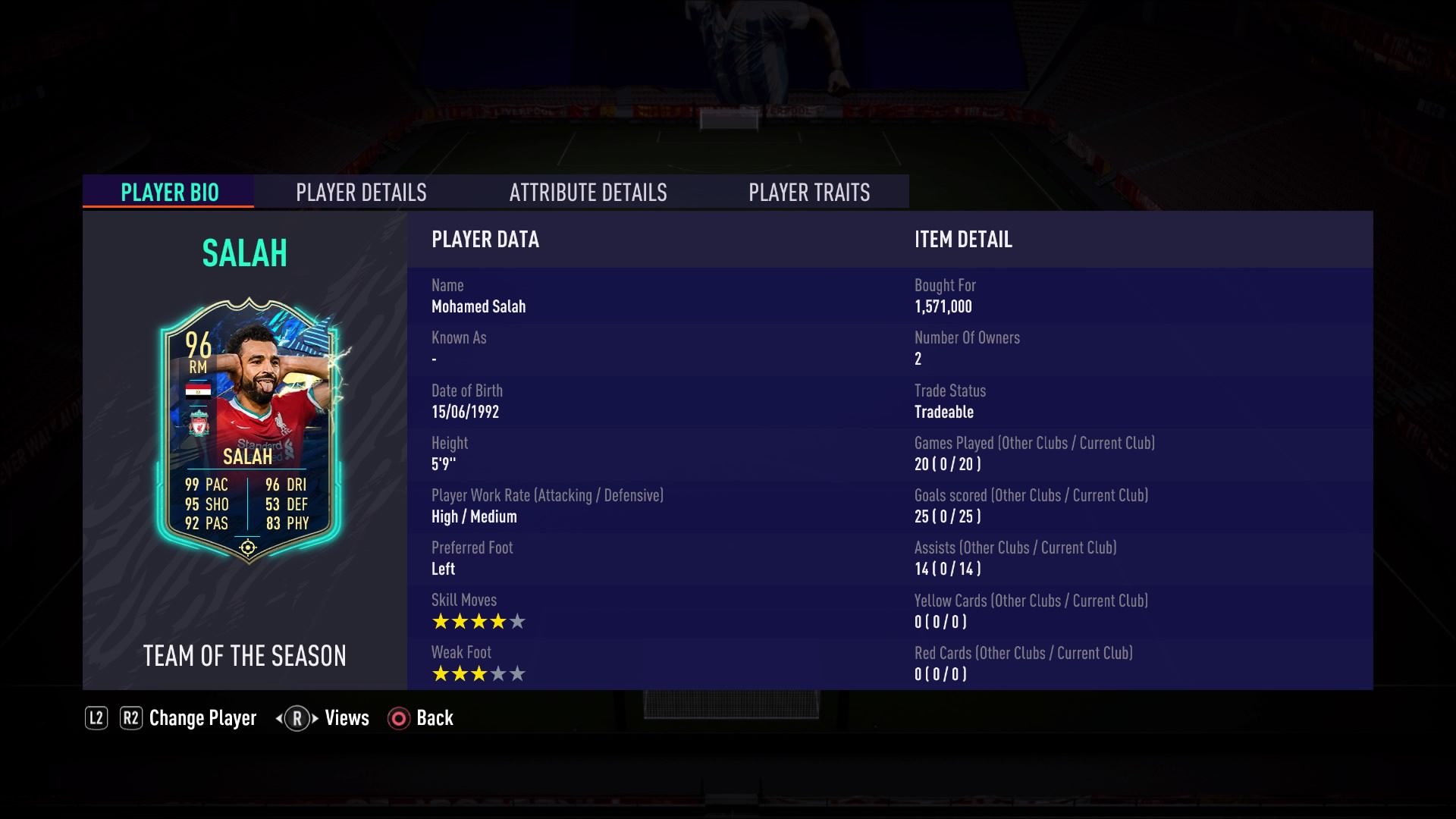