If you read the POTM Koulibaly review that we released earlier in the week then you will already know that this weekend was undoubtedly a success.  Rank I in the first Weekend League of the year is literally all you can ask for and it came down to a combination of solid defensive work in the back mixed with some offensive prowess in the front.  Sadio Mané was the focal point of this weekend's squad as I deployed him as the striker in my 4-2-3-1 formation.  While it was a successful first run with the new formation I have a concern moving forward that expectations might be too high for many following in the Senalgese Sniper’s footsteps.  With the HAWK chemistry style applied Mané became the talisman for everything that went well up front this weekend… creating chances with his breathtaking pace, dumbfounding defenders with touch tight wizardry on the ball, carving through backlines with pinpoint passing, and finishing off chances with ruthless routine.  This card is special... and with a possible inform on the horizon I know what my motivation will be for this coming Weekend League if it drops.  In the end, Mané was the goal machine all weekend in the following squad: 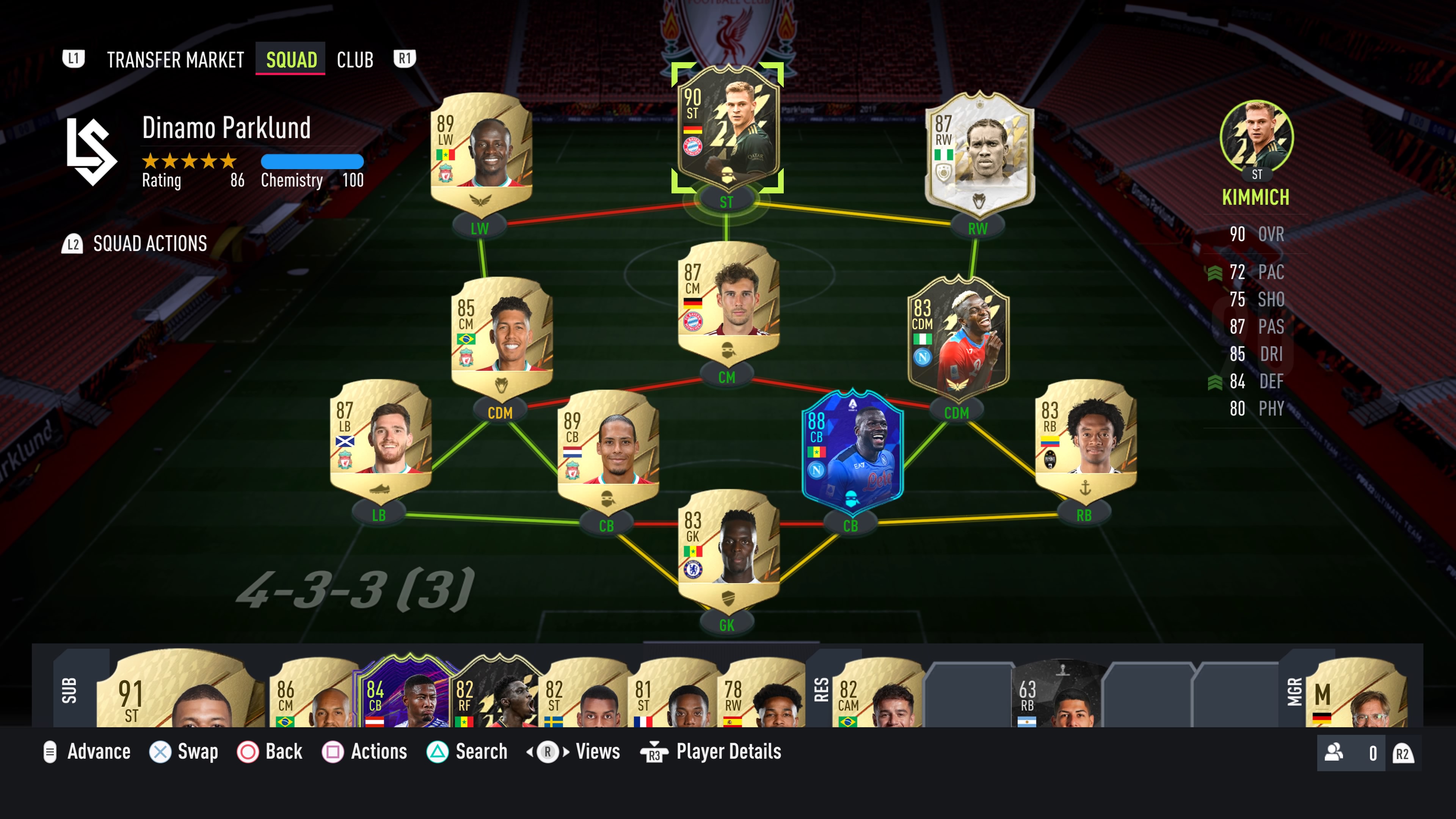 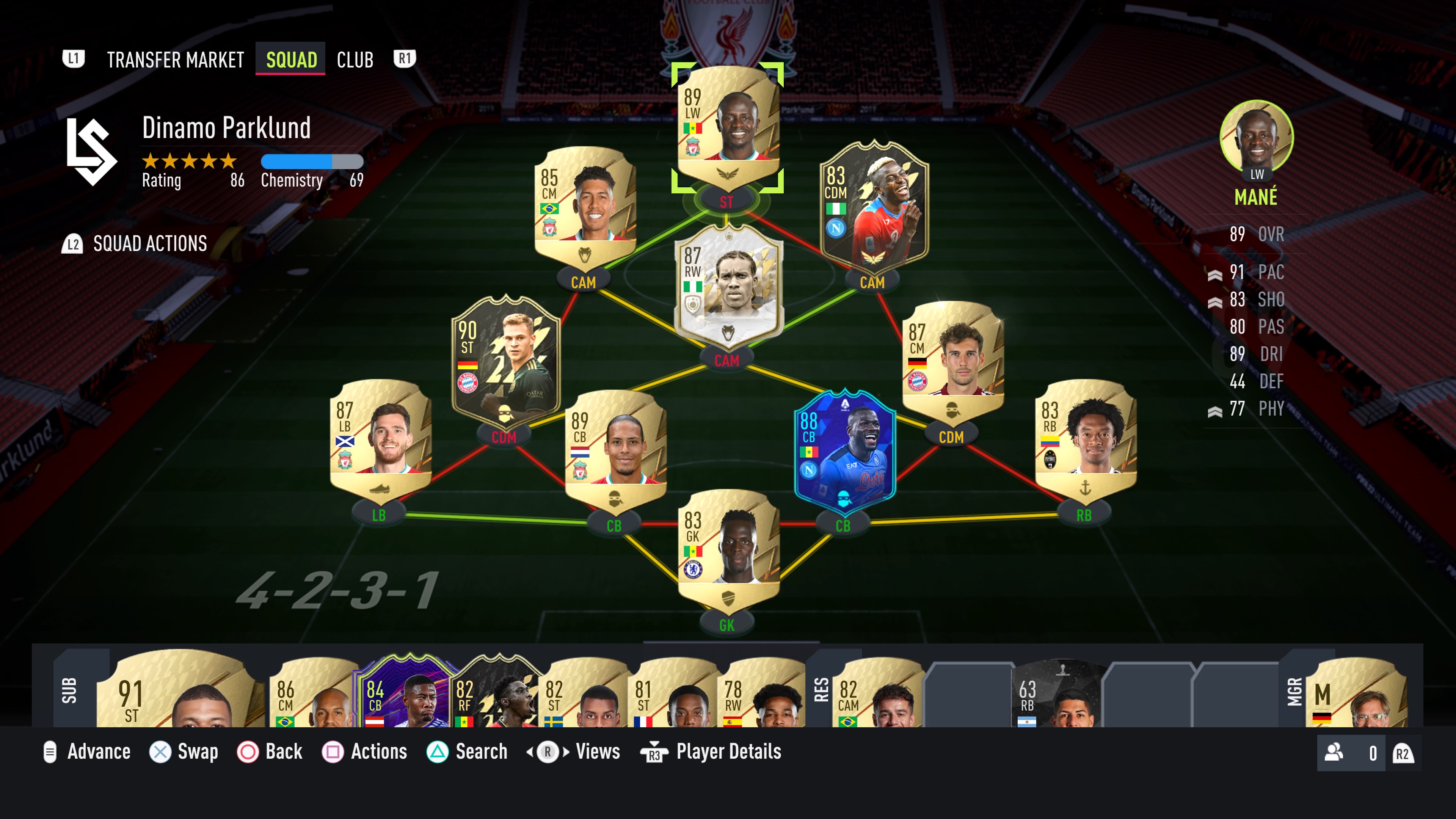 Once again the statistics on this card look like a mess.  While I am grateful to the three fine folks who gifted me wins this weekend… while at the same time disgusted with the donkey who rage quit before I could take my penalty shot at 1-1 in the 80th minute… These matches count in the games played category and are making these statistical images a bit of a farce. Truthfully Mané had 18 goals and 4 assists across 15 matches played.  Yet, when all was said and done and I looked at the result I honestly couldn’t believe how low the totals were.  But I think that is just FIFA 22 in a nutshell.  I walk away from matches thinking, “wow I really played well there and dominated throughout!” Yet the match finishes with a final score of 1-0 or 2-1.  In these moments it was always Mané who came up with that bit of stardust to break through the defensive barricades I came up against… but again those low totals seem like a trend we will see for the time being.

While I am still getting used to the speed up dribble that occurs after holding sprint in FIFA 22, I will say that I really started to enjoy the “feel” of the game using Mané throughout this weekend.  The 98 ACCELERATION feels like Mané is shot out of a cannon as he takes off while the 95 SPRINT SPEED couldn’t have felt any faster when reaching top speed.  The best part about all of this is that I constantly felt in control of the breakneck pace given how amazing the dribbling with this card can be.  93 AGILITY is so smooth and left many opponents grasping at thin air… while the 88 BALANCE allows all of the chops and swivels and turns to feel simple and well within control.  The combination of these two mixed with the 88 BALL CONTROL & 90 DRIBBLING were simply perfect and again makes me dread having to move on to different options after such a successful debut weekend.

If having a strong weak foot was important in FIFA 21 … then it is astronomically vital in FIFA 22.  It is hard enough to score in this game when you flush one from 12 yards away towards the top corner with the preferred foot of very good finishers… nevermind trying to ping one far post from 15 yards using a 3 STAR WEAK FOOT player on their weaker side.  Thankfully the 4 STAR WEAK FOOT on Mané was good enough to tally a few stunners this weekend and I generally noticed minimal difference from the right.  I will say that the finesse shots (that of course, will see the keepers improve on soon, which can’t help the goal drought situation) with Mané’s left were still hit and miss (mostly miss) and that would be the reason for a less than perfect score.  The 91 FINISHING, 93 SHOT POWER, 90 LONG SHOTS and even 75 VOLLEYS all felt like they performed as advertised… with a jumping left footed volley stealing the video spotlight.

Much like the other 9/10 that I have used this FIFA in Virgil Van Dijk… these premium heavy hitters are going to cost you.  In this case, going to cost you an extra 50k from when I bought him based on his predicted inform.  Yet even with the inflated price tag I still think that 275k is about right for a card of this outstanding quality… truthfully I can address the good and bad rating here as well in saying that there really isn’t a lot bad to report at all.  Could the 84 SHORT PASSING have been more crisp and sharper in 1-2 situations? Yes.  Could the 77 STRENGTH be increased to create a stronger foundation against challenges? Absolutely.  But those are the fine margins, along with a 5 STAR WEAK FOOT, that will create your million coin 10/10 rated options at this stage in the game.  For this price, Mané seems excellent value for your hard earned coins and certainly did not disappoint.

Obviously, an inform omission will see this card lower in price… but either way, I would suggest at least looking into buying this card.  For those of you already building wildly competitive squads, I think Mané can compete with the absolute best at this stage in the game.  While the rest can certainly look to Mané as a “save up for immediate improvement” option that would take any team a step forward in terms of quality.  I truly can’t bring myself to sell this card at this point despite the fact I know I will have to.  He has helped me requalify for WL and progress two divisions in Rivals across the week.  The card oozes quality… and if he does get an inform for his performance for Senegal, here is hoping I can keep him for good in a red pick come this weekend.  It was a pleasure… and I believe it would be for you as well.  Hoping you are all well. Cheers for reading. 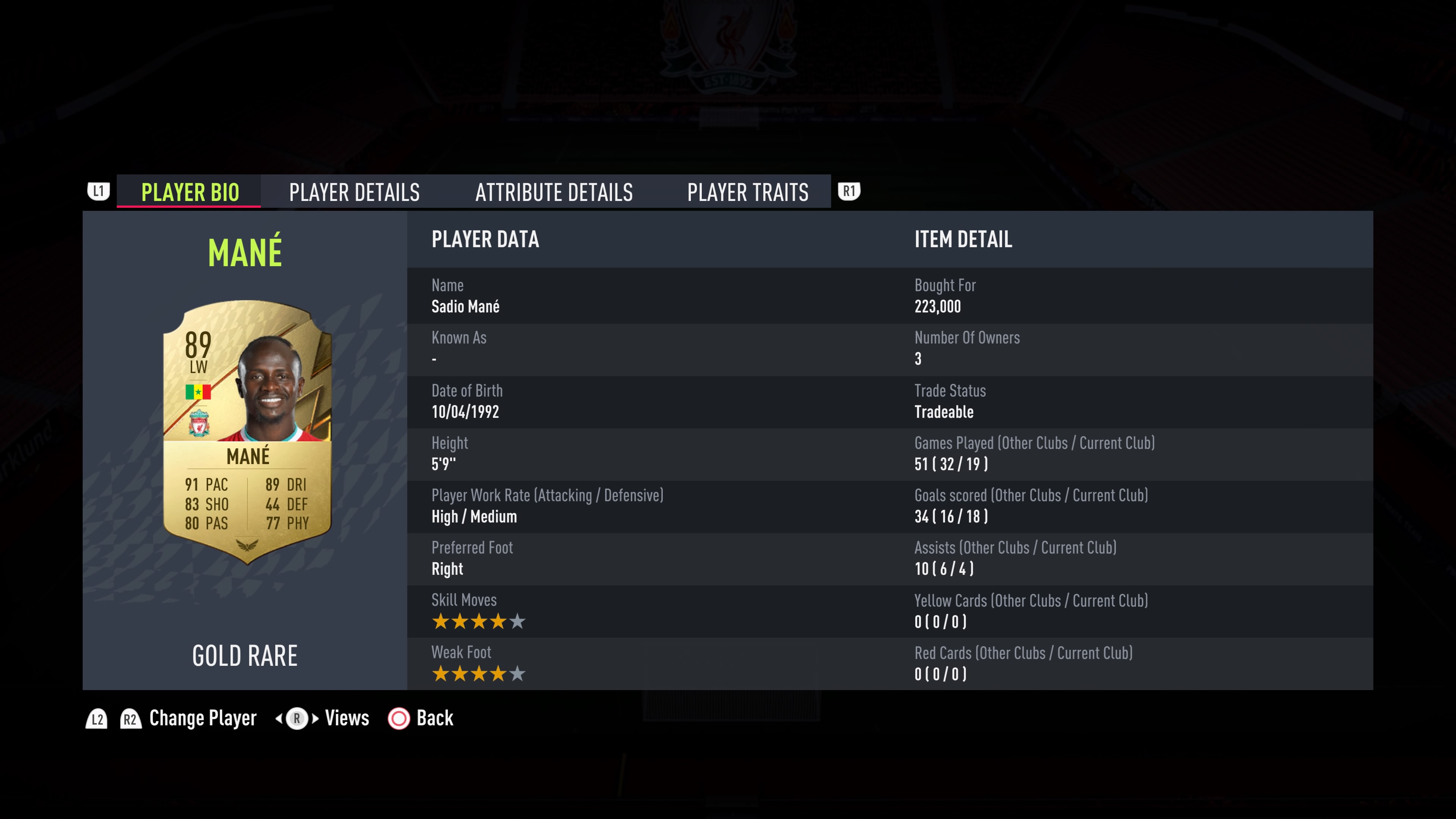