All the hype is currently surrounding TOTY and for good reason too but TOTW 19 has some gems that you don’t want to miss with the likes of Verratti, Gvardiol and Diaby. Alongside two potential live item upgrades in Kimmich and Malen. 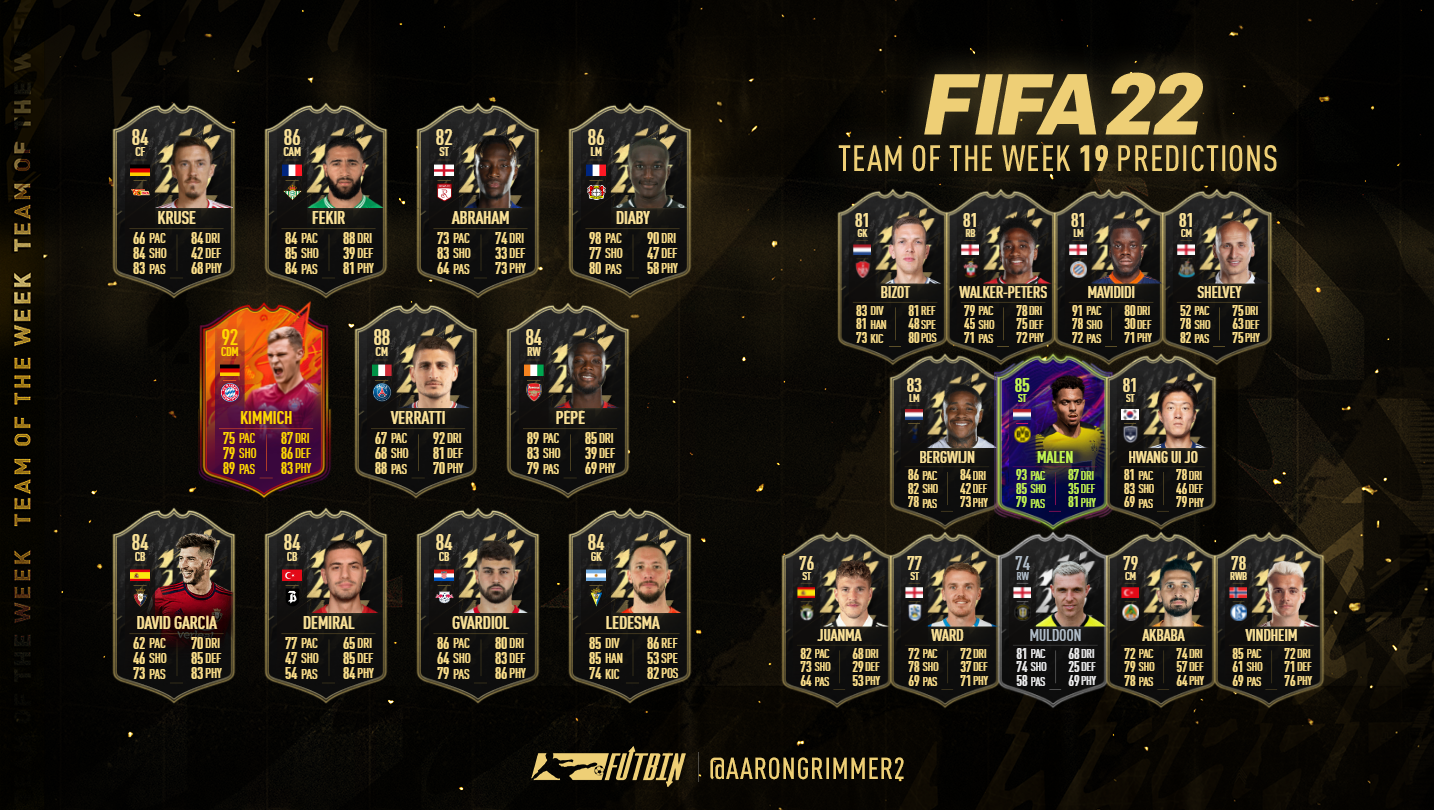 Jeremias Ledesma – GK - OVR 77>>84
Ledesma has been pivotal for Cadiz this season who are currently in the relegation zone, three points this weekend results in them being just three points from safety though. Without the Argentine, I am positive that their overall point tally would be significantly lower though with Ledesma making saves after save for them. In total, he made eight this week to keep his clean sheet intact and was awarded MOTM for doing so. With his first IF coming in TOTW 14, I believe the gap is just enough for another inclusion

Merih Demiral – CB - OVR 77>>84
On loan from Juventus Demiral is out to prove a point. The talented defender has struggled to break into a competitive Juventus backline since making the move from Sassuolo but with both Bonucci and Chiellini getting on in age should he impress at Atalanta this season I believe there is a chance for him during the 2022/23 campaign. A superb performance at the back during Atalanta’s 0-0 away draw with Lazio saw Merih awarded MOTM with a 7.5 match rating and with not much competition from defensive options this week I believe that will be enough for him.

Josko Gvardiol – CB - OVR 75>>84
There are some ridiculous central defenders in FIFA this year with the meta being pace more than ever. In previous years there would be some serious hype around this IF and although Gvardiol will still be a very strong option with the amount of mid 80 pace CB’s already available in the game he’s not going to improve on what's already available. The Croatian is in line for his second upgrade of the year after scoring one of Leipzig’s two goals during a 2-0 win over Wolfsburg

David Garcia – CB - OVR 78>>84
You have to look way back to TOTW 1 to find Garcia’s first inclusion into TOTW but the Spaniard now looks set to pick up his second after scoring during Osasuna’s 2-0 away win over Granada. The defender was named MOTM for his performance and with a lot of low scoring matches in Spain this week it makes sense to include a defensive option

Moussa Diaby – LM - OVR 81>>86
When Diaby picks up his SIF on Wednesday, he will be the same rating as the Rulebreaker he picked up earlier in the year. This card is completely different though and thus gives an alternative to that already available. The Frenchman scored three goals from LM for Leverkusen as they recorded a 5-1 win over Augsburg as they continue to chase Dortmund for second place.

Marco Verratti – CM - OVR 87>>88
Many will be hoping for Ramos after the Spaniard scored in their 4-0 win over Reims however the reality is he is not even close to the side after picking up a match rating of 6. Instead, we look at Verratti, who also scored but was named MOTM with the strong rating of 8. A good card but not what those OTW investors are after.

Joshua Kimmich – CM - OVR 89>>91
I’m still not really sure as to why EA keeps opting to snub these headliner options but once again, we have a couple in line for potential upgrades. Kimmich is the best option after he recorded two assists for Munich during their 4-1 away win over Hertha. Muller was actually named MOTM but seeing as he can’t feature and Kimmich was in their TOTW I can see it being enough for his SIF.

Nabil Fekir – CAM - OVR 84>>86
There are many people who regret failing to complete Fekir’s SBC card early into FIFA and rightly so with him being a highly used card in early FIFA. Those who opted against the Frenchman will be happy to know that an IF is now potentially on the way for him though. Fekir provided two assists this weekend as Betis recorded a 4-1 away win over Espanyol, taking them up to third in the table, above both Atletico and Barcelona.

Nicolas Pepe – RM - OVR 81>>84
AFCON matches being included in TOTW 18 was a surprise to us all but it does mean there are more options for this week's side. Talking of surprises Ivory Coast recorded a 3-1 win over favourites Algeria which resulted in Algeria being eliminated as bottom placed side in their group of Ivory Coast, Equatorial Guinea and Comoros with just 1 point. Ivory Coast topped the group with their win though and Pepe with both a goal and an assist stands a good chance of making the side.

Tammy Abraham – ST - OVR 78>>82
Abraham continues to thrive under Mourinho at Roma this season with his latest brace taking him into double figures for the season. Roma ended up winning 4-2 away at Empoli with the Englishman receiving MOTM from Gazzetta with an impressive 8/10

Max Kruse – ST - OVR 81>>84
When it came to strikers this week the selection options were simply abysmal in terms of FIFA. Kruse’s RTTF card was one of the worst dynamic cards we will ever see and his IF is going to be no better. That being said after scoring twice for Union Berlin during their shock 2-1 away win over Gladbach, he has every right to be in this side.

Marco Bizot – GK - OVR 77>>81
The substitute keeper was one of the easiest choices of the week with Brest shocking Lille via a 2-0 home win. Bizot made a total of five saves, a couple of which were very impressive, in order to deny Lille from breaking through. Bizot was then named as keeper of the week in France which ultimately secures his spot in TOTW 19.

Kyle Walker-Peters – RB - OVR 77>>81
With the emergence of Tino Livramento this season game time has been hard to find for KWP, who was a vital part of Southampton's side for many years. Although spells at LB have seen him included, he is better on that right hand flank. The Englishman scored the opener against Man City on Saturday and although they failed to hold out a point against the league leaders is still impressive and thus with one goal and MOTM from RB Walker-Peters looks to be a strong candidate.

Stephy Mavididi – LM – OVR 76>>81
Usually, when it comes to Ligue 1 there are numerous defensive options to choose from with the odd attacker then making an appearance. This week is the complete opposite though with an avalanche of attackers making a claim for a spot. I'm not sure how many will end up making it as EA will cap the number of inclusions from the division but one who definitely should make the cut is Mavididi. Scoring twice from LM Mavididi helped Montpellier to a hard fought 3-2 win over Monaco.

Donyell Malen – LW - OVR 80>>83
Although Malen’s card would be a LW it’s all about that potential OTW upgrade, which would make his 85 a very strong option in the game. Malen was awarded MOTM after assisting twice during Dortmund's narrow 3-2 win over Hoffenheim. This one is far from guaranteed though and with Malen’s price already up in anticipation, there is a lot of risks if you invest now.

Jonjo Shelvey – CM – OVR 75>>81
Newcastle is in desperate need of points should they want their new era to not end in relegation and thus a 1-0 win over Leeds is exactly what they needed. A lack of Premier league candidates, at least strong ones was a real problem this week and thus I would expect a surprise or two to occur. Although Shelvey only scored once with it being a vital three points and receiving a nine-match rating, I feel that he is one of the stronger options in the division this week

Steven Bergwijn – LM - OVR 80>>83
Tottenham performed the great escape on Wednesday evening, trailing 2-1 to Leicester in stoppage time before Bergwijn managed to score in both the 95th and 97th minutes to see Spurs take home all three points. Bergwijn was only on the pitch from the 79th minute onwards which usually goes against players but with it being these circumstances and in a premier league match I would be surprised to see the Dutch midfielder miss out.

Ui Jo Hwang – ST - OVR 76>>81
A seven-goal thriller between Bordeaux and Strasbourg saw Bordeaux come out on top as 4-3 winners. Hwang scored three of his sides four goals and as a result, was named player of the week in France with a 9/10. It’s very rare to see anything above an 8 awarded but even then, Hwang would have been nailed for the side.

Andreas Vindheim – RWB - OVR 71>>78
I missed the German lower league wingback last week and the same is not going to occur two weeks on the trot. Schalke recorded a convincing 5-0 win Aue this week and it was the debutant, Vindheim who shone. Scoring once and assisting another it was the dream start for the Norwegian, who went on to be awarded player of the week in Bundesliga 2 with a perfect 1 match rating.

Jack Muldoon – RW - OVR 64>>74
The first of two ELL players to make this week's prediction is Harrogate's Muldoon. It looks as though he was played out wide this week which only increases his selection chances after he found himself scoring all three of their goals during a 3-0 win over Oldham.

Emre Akbaba – CM - OVR 72>>79
When two sides next to each other in the table face off you expect it to be a close encounter however this match was far from that with Alanyaspor running away with a 6-0 win over Hatayspor. Akbaba was magnificent throughout scoring three times from central midfield and thus walks into TOTW 19

Danny Ward – ST - OVR 68>>77
Another hat trick, this time in the more advanced ST role. Danny Ward’s treble ensured Huddersfield came away with all three points via an entertaining 4-3 away win over Reading with six of the seven goals all coming in the 1st half. Huddersfield now sits just inside the playoffs as they look to re-join the Premier League.

Juanma – ST - OVR 67>>76
Yet another hat trick to finish off the week, this time over in the second division of Spain. Leganes continue to struggle after dropping out of La Liga and now faces the risk of dropping into the relegation zone. Burgos added to their misery with a 4-0 win, of which Juanma scored three of those four goals.