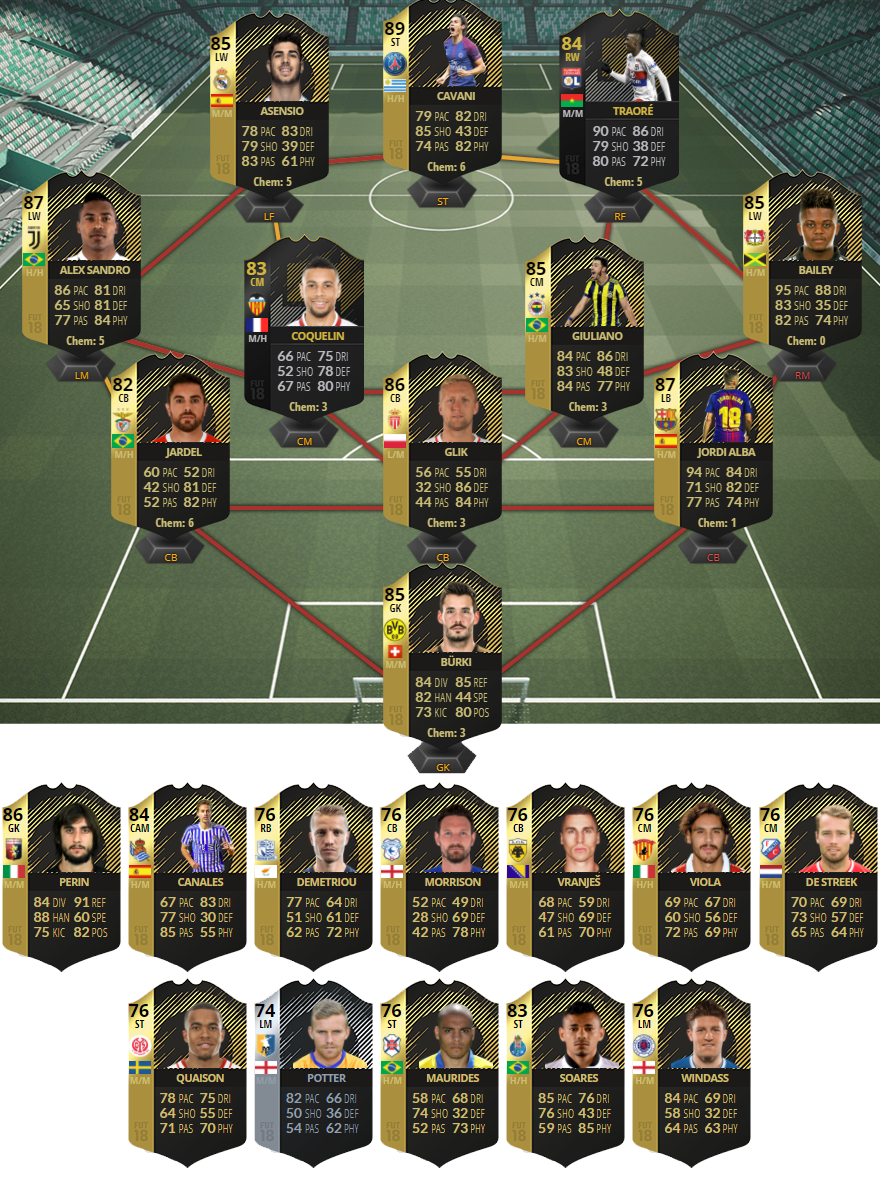 Borussia Dortmund were away to Gladbach for their Bundesliga fixture and although they pulled off a 1-0 win, it was anything but convincing. Gladbach has a total of 28 shots, 11 of which were on target and if it wasn't for Burki pulling off some incredible saves, the match could have ended very differently. This one is surely nailed on and a solid way to start these predictions off!

Over to France now where Monaco played hosts to Dijon in their Ligue 1 match. In a comfortable 4-0 victory for the hosts there were several fantastic performances, however our selection goes with Glik. A clean sheet and a goal from a CB is often enough to see them make the cut.

Jardel only secured his first inform two weeks ago, which immediately makes this prediction a little riskier, however after a performance like this it becomes very hard to ignore him. Benfica were hosts to Boavista for their Liga Nos fixture on Saturday and during a comfortable 4-0 thrashing, Jardel not only kept a clean sheet but also scored and picked up an assist for himself.

Barcelona were on the road to Eibar for their Saturday fixture and with the gap slowly decreasing atop the table, three points was a must have from this game. Luckily, the boys were prepared and in a confident performance they pulled off a 2-0 victory. Alba at the back is the selection here, with a clean sheet and a goal to his name we could be seeing his first inform.

Juventus were away to Torino for their Serie A fixture and with Napoli still one point ahead atop the table, only a win was acceptable. Luckily this is exactly what Juventus managed to achieve, although it was far from convincing! Sandro is the man who gets our vote today, with a clean sheet and the only goal to his name, surely, he has done enough to earn his first upgrade of the year.

The path to glory cards and OTW cards seem to have had the same players being upgraded multiple times throughout the year while the majority of players have failed to even gain a single upgrade. This week however things may be changing on this front and our first nomination goes to the ex-Arsenal player Coquelin. Valencia pulled off a 2-1 victory away to Malaga and Coquelin not only pulled a near perfect match rating, but also scored one of the critical goals to get them back into the game.

Over to Turkey now where Fenerbahce played hosts to Alanyaspor in the Super Lig. As we mentioned before, there are going to be a few special cards featuring in these predictions and Giuliano is our second. In a comfortable 3-0 victory for the hosts, Giuliano scored twice, picked up the man of the match award and has potentially earnt himself a second upgrade too!

Another prediction and another path to glory player, Asensio makes it three so far! Real Madrid were away to Real Betis for their La Liga fixture and in a game of 8 goals, it was the travelers who stole the points. The match ended 5-3 with Asensio scoring twice to wrap up both the match and the points.

Leverkusen were away to Hamburg for this Bundesliga fixture on the weekend where in an extremely tight game, they just managed to edge the win in a 2-1 victory. Bailey was the player who really stood out this time, achieving the man of the match award and the first goal, should give him a solid chance of a third inform, especially with the lack of games and top performances elsewhere.

Lyon were away to Lille for their Ligue 1 clash this weekend and with the visitors 2-0 up at half time, the game looked all but wrapped up. Traore was the man who scored both of these goals, putting himself in a fantastic position to achieve yet another upgrade. The only concern is the end result, with the match finishing 2-2, will his 2 goals be enough to secure him another upgrade on his OTW card? We think so.

PSG were once again on fire as they destroyed Strasbourg 5-2 during their Saturday fixture. There were some incredible performances across the board, especially Neymar who not only bagged a goal and an assist but received a near perfect match rating once again. Our nomination however goes to Cavani, 2 goals and a solid performance should be enough for a second inform this week.

Genoa were hosts to Inter Milan for this Serie A fixture and despite the visitors being strong favorites, Genoa came together as a whole to pick up a 2-0 victory and all 3 points. Perin in goal was once again as solid as a rock, making some huge saves and ensuring that clean sheet as well.

Now this is something that we don't see every week and if this guy doesn't get an inform, well, words simply cannot explain what would happen! AEK Athens were hosts to Xanthi for their weekend fixture, and in a dominant display the hosts left as 4-0 winners. Not only did Vranjes secure a clean sheet, but he also bagged himself a hat-trick. Inform is surely confirmed.

We head over to England now and while the Premier League may have been out of action, there were some fantastic performances in the lower divisions that deserve our attention. Southend played hosts to Portsmouth in their League 1 fixture and while Demetriou may not have kept a clean sheet, 2 goals in a 3-1 victory from right back, may just be enough to make the cut.

Remaining in the Championship here where Cardiff played hosts to Bolton on Tuesday. With a picture-perfect performance, Morrison not only ensured a clean sheet was kept at the back but he also scored one of the goals in a 2-0 victory.

Real Sociedad were hosts to Levante for their La Liga clash this weekend and even though Canales didn't start, he somehow creeps into our predictions today. He came on only after 13 minutes and with the hosts already 1-0 up, he ensured the win was held from start to finish. Scoring himself and assisting the third, hopefully he has done enough to grab himself an inform too.

Heading over to the Serie A again now where a revitalized Benevento played hosts to Crotone towards the bottom of the table. At Christmas the task of staying up was impossible and while things are still far from optimistic, the recent run of form have given Benevento an outside chance at least. During this 5-goal thriller it was the hosts who pulled of a 3-2 victory with Viola at center mid scoring once and assisting another.

FC Utrecht were away to Roda for their match this weekend and after leaving as 4-1 victors, it looks like the journey was worth it! Streek from the central midfield role is the man who gets the vote here, with 2 goals and the man of the match award surely, he has done enough to squeeze into the mix.

Mainz travelled to Hertha Berlin for their Bundesliga fixture on Friday and in a game of only two goals, Quaison was the man who provided both. Now on any other week two goals may not quite cut it, but with the lack of options coupled with this solid performance, this guy has a real chance.

Dropping down the English divisions here and we find Mansfield playing hosts to Newport in League 2. In a comfortable 5-0 victory for the hosts, Potter is the man who gets this acknowledgement, scoring not once, not twice but three goals on the night.

Belenenses were away to Estoril for their Liga Nos fixture this week and despite a fairly tough grind from start to finish, they managed to walk away with all three points under their belts. Maurides was the man of the hour, scoring both goals in a 2-0 victory, picking up the man of the match award and hopefully giving himself a shot at an inform too.

Porto were hosts to Rio Ave for their Liga Nos clash on Sunday where in a near perfect performance, they left as comfortable 5-0 winners. Telles once again had a fantastic performance from LB, assisting twice, however our nomination goes to Soares with 2 goals, an assist and a flawless performance from start to finish.

Rangers were away to Hamilton Academical for their Scottish Premiership clash where in a game of 8 goals, they managed to edge out the points as 5-3 victors. Windass was the man of the hour, bagging himself a hat-trick and ensuring his side were the champions on the day.