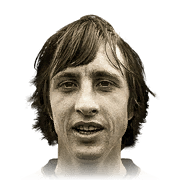 Huge shift in gears with this weekend’s second review, which in truth spawned more out of necessity than a planned article. The difficulty linking FUT Future Stars Gravenberch into my squad while maintaining the level required to compete was proving difficult … while at the same time a largely untradeable squad had left me with the majority of my coins waiting to be spent.  With that in mind, it was time to try one of my all-time FUT favorites in the legendary Johan Cruyff.  This is one of those reviews that it is obvious the card is going to be good based on the price… But in my most recent experience that is not always necessarily true.  In my past two ICON packs/picks I have received 89 Ronaldinho and most recently 94 Zidane. At the time I was made up with both but I am telling you I do not get on with either of these cards and in fact, I am already contemplating throwing them into upcoming SBCs.  If you have either of these cards and they are doing the business for you, I would love to hear the formation and chemistry styles that are making them function.  With these recent disappointments in players that are highly priced I was a little worried that the Dutch Wizard might have fallen victim to their deficiencies.  With that, I hopingly applied a HUNTER chemistry style and set out with Cruyff as the striker in my 4-2-2-2 formation.  Thankfully number 14 proved to be number 1 all weekend long in the following squad: 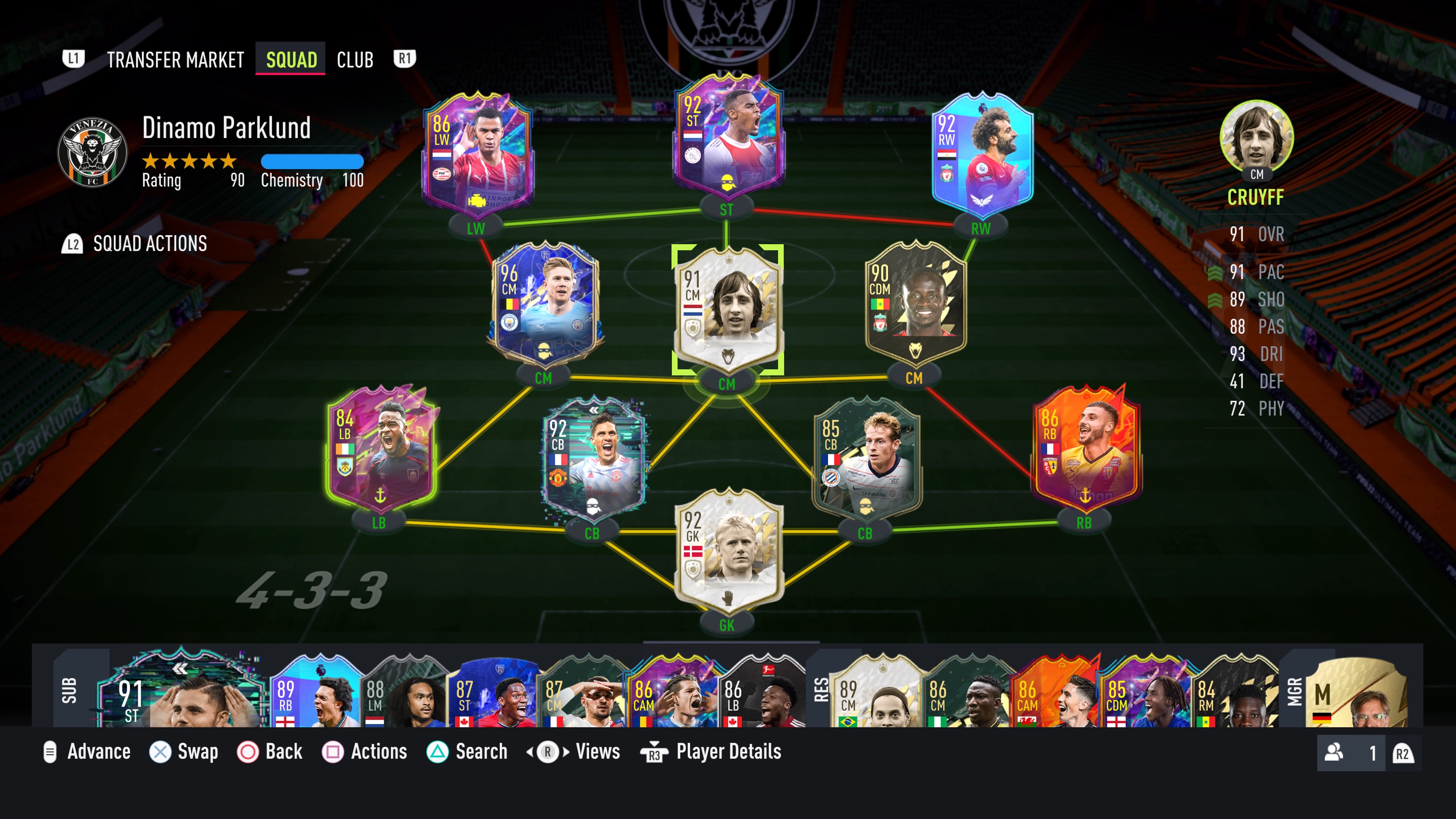 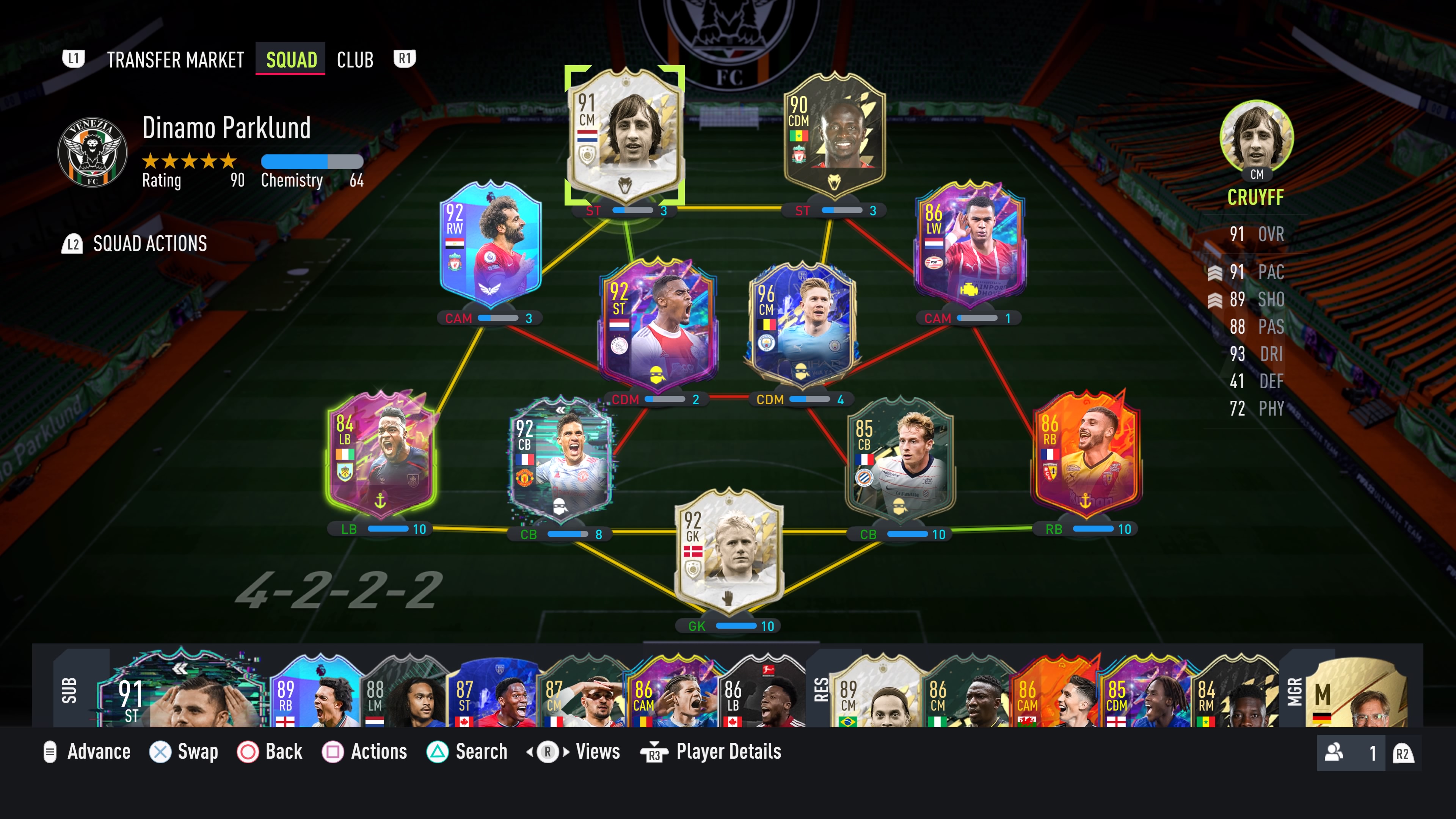 The thing I love most about Cruyff and have loved since he received an ICON in FIFA 19 is that he feels like he is for everyone.  Of course, the irony in that statement comes from the fact that there are lots who can’t afford him and therefore he is certainly not for everyone.  But what I mean is that there is not a playstyle I can think of where Cruyff does not suit your needs and fill them with an unbelievable level.  The 5 STAR SKILLS will have those with the magic hands salivating at the possibilities… the body type and dribbling statistics have left stick dribblers pulling the strings… the 5 STAR WEAK FOOT makes positioning and formation a non-issue… and overall the card feels like there are hidden boosts everywhere as Cruyff generally outperforms his statistics and attributes across the board.

It is reviews like this that start to ruin future reviews as the bar of expectations for what a card can do starts to rise to unachievable levels.  Previous to this review I would have said a 10/10 shooting rating is a card that is constantly accurate and potent on their strong foot with minimal difference on the weak foot.  The one area of exception would be the weak foot finesse which always seems, for lack of better words, hit and miss.  But with Cruyff, it was as if the ball was magnetised to the far corner time and time again.  The key here is that he doesn’t have the finesse trait in the first place, yet it certainly felt that way in the review.  The 99 FINISHING is certainly in effect, the 87 SHOT POWER felt more like 110, and the 90 LONG SHOTS were more deadly than most strikers inside the box (which in fairness could be a secondary title for this game).  22 goals in 15 matches would have been good if Cruyff had played the full 90 minutes in each match… but on at least 3 occasions an early brace meant a pause and quit before the match could really get going.

If a card comes out with 94 AGILITY & 80 BALANCE I would be a little skeptical about the dribbling they can produce.  Even with 95 BALL CONTROL & 94 DRIBBLING I would be concerned with how they would deal with the responsiveness and quickness required for those highly congested areas of the pitch.  The 99 ACCELERATION & 99 SPRINT SPEED would be massive and the hope would be that they perform as they should in game.  With all of that said a large part of the performance comes down to body type and the hope that in this case the lean build, will unleash the cards ability to dance on the ball in game.  All of these thoughts enter my head prior to a review and in the case of Cruyff, it took about 5 minutes of game time to put all worry to bed and simply start enjoying the wonders of this card.  The video doesn’t do it justice because those are moments that led directly to goals… it doesn’t include the countless times Cruyff turned defenders at half to release the pressure of their relentless press… it doesn’t include the fear and over commitment that led to secondary assists once the ball was moved across the pitch… and it doesn’t include the feeling that you get when this card is on the ball and responding to every push and pull of the joystick.  Only Ray Hudson could have the words … magisterial!

2.8 million is always going to be where this review comes crashing down.  The classic “I didn’t see that coming” flooding into comments… followed by “that would be great if I could afford him”... and the worst part is, they are right.  But one thing I will say is that if I were to review 94 Zidane instead, the 2/5 Value for Coins I would give him after early days with the card would suggest that the premium price tag doesn’t always mean premium quality on the pitch.

The one small issue with Cruyff would be the 68 STRENGTH, which leads many FUT Managers towards a HAWK… although I am not sure what 73 STRENGTH is going to do against the likes of Honorable Mention Rudiger.  Regardless, you are not getting a ton of raw strength on the ball from this card and with only 81 STAMINA you are not always getting a full 120 minutes of quality if needed either.  But the problem for defenders is always going to be trying to lay a glove on the Dutchman, which is like trying to grab smoke in the wind… and in my experience, not many matches made it to 120 minutes off the back of this legend mounting goal total.  Small issues, against massive upside.

What started as a review out of necessity turned into a reminder of how fun this game can be with the right players.  While Cruyff certainly costs a fortune, he is worth every coin in the joy he returns from a game that is too often lacking in that department.  The card is fantastic… and I know you didn’t see that coming.  So I will end off by once again looking for answers for 89 Dinho and 94 Zidane instead… dark times with those two cards… and if you packed Cruyff in your own picks, I envy you beyond belief.  Hoping you are safe and well.  Cheers for reading. 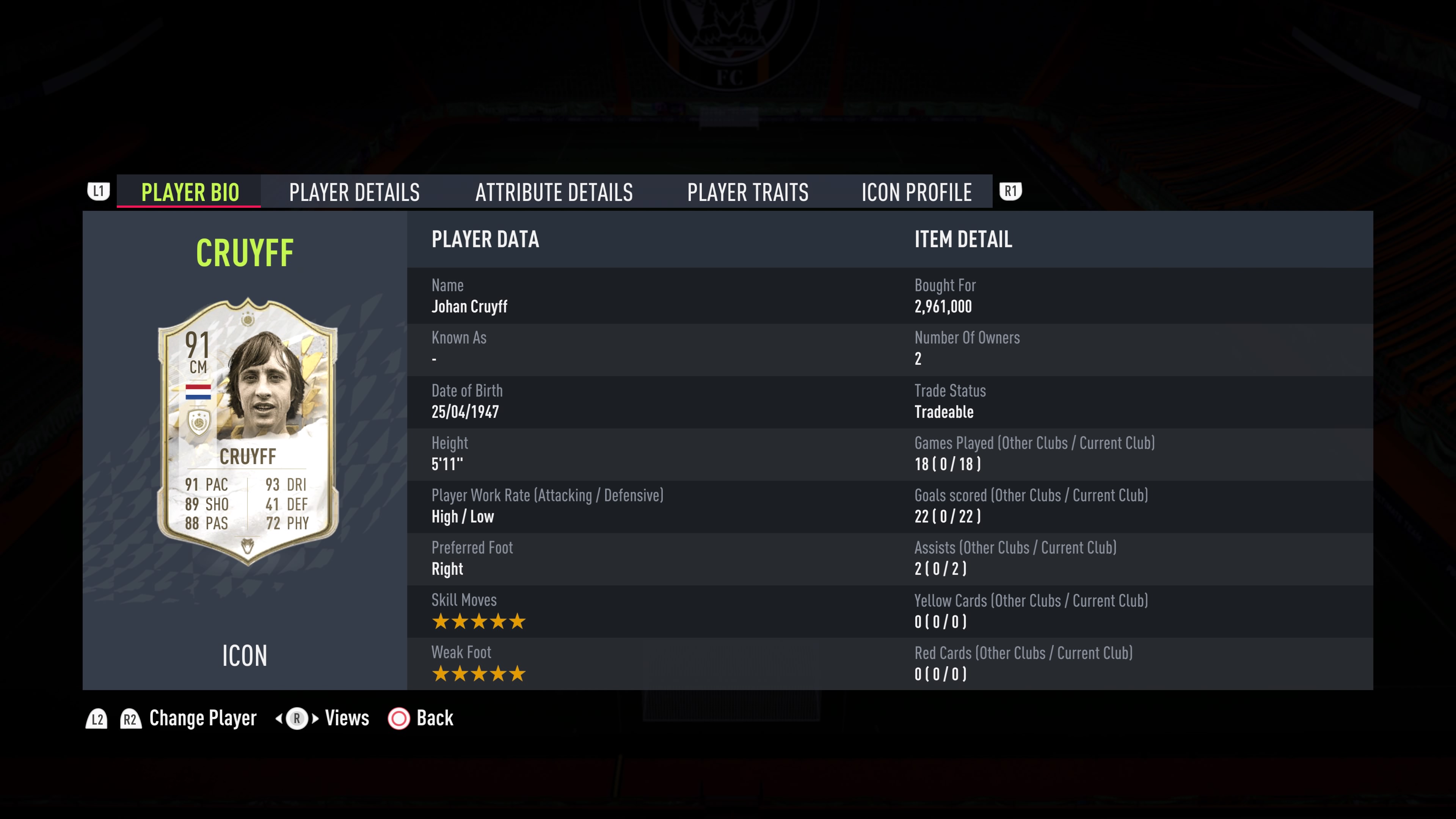 Ok so first of all he is amazing. Cruyff really gives u that icon feeling like R9 or Pele etc....?nxnxnas?

He is a club legend for me since Fifa 20 so of cours i had to buy him this Fifa again and i was not disapointed. He feels amazing on the ball and his finishing is unreal. If u have the coins give him a try.

So after grinding for the assist milestone 100k pack, i open it and lo and behold, out walks 91 Cruyff,

It is just an amazing card, what more can you expect from a 5star/5star monster with those dribbling stats and finishing along with the 99 pace it gave him with the hunter.

He is silky as all hell on the ball, finishes from amazing angles. I am truly blessed to get this card first owner and i would definitely say he is worth it, also of course links to everyone because he is an icon.

Stamina, not a significant enough problem though.

I have played CR7, Mappe and Eto'o (mid) - Eto'o was great. Now I try Cruyff and he is the best striker I have played in Fifa22. He is absolutely crazy: fast, his moves are destroying every defender, shooting is amazing (shoot power, too - I was impressed), his positioning is perfect, every pass finds the player. I'm playing Division 1 and had some problems with scoring. Cruyff's data as CAM: 3 Games 14 Goals - unbelievable.