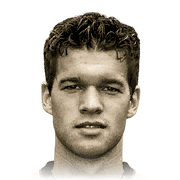 -
Sub out
Upcoming Matches
P. Chemistry
Squad chemistry
ST
87
RW
85
LW
85
CF
87
RF
87
LF
87
CAM
87
CM
89
RM
86
LM
86
CDM
86
CB
83
LB
83
LWB
84
RB
83
RWB
84
Reset
Basic
Sniper
Finisher
Deadeye
Marksman
Hawk
Artist
Architect
Powerhouse
Maestro
Engine
Sentinel
Guardian
Gladiator
Backbone
Anchor
Hunter
Catalyst
Shadow
Comments
Reviews
0
/600
Click here to verify your account in order to comment Update my avatar Dos and don'ts
Top Rated
New
Controversial
Show comments
Top Reviews
Only logged in users can submit a review
A review must be written in English
At least 200 characters are required.
Compare this player to other similar players you have used(optional).
If you import your club to FUTBIN or send us an image with the player data(fill the form below) your review will be marked as verified.
Include what you liked about the player in the pros area and what you disliked about the player in the cons area.
Your review will be manually checked during the next 24 hours.
Chem Style Used
Formations
Position
Rate Player Base Stats (1-10)
Pace
5
Shooting
5
Passing
5
Dribbling
5
Defending
5
Physicality
5
Most Used In:
Submit Review

Packed this bad boy in a mid or prime and was pretty excited to use him for my WL. At this time in the cycle post TOTY a lot of midfielders require either a lot of pace or ability on the ball. When you talk about Icon midfielders you think Mid Vieira, Mid Gullit, Mid Lahm, and Matthaus are usually seen every weekend. Not to mention the plethora of special cards out at the moment. If you're looking for this card its more than likely just for the links however, this card will do a job in central or defensive midfield.

I used him with a shadow as a balanced CDM in a 4-2-3-1 and as a balanced CM in a 4-4-2. It must be said that he is an AUTO DEFENDER, if you are patient and try to cut off the lanes he will lunge and try to intercept and he is gonna get a majority of them. With his height and physicality in game he will win tackles against smaller attackers. What sets him apart are two things; 4* 4* really compliments him as it gives him a bit more versatility going forward. As well as his 90 shooting and 94 short passing and 93 long passing which makes him a dual threat when attacking. If you're gonna play him primarily as a CDM you should slap a shadow and it'll make him a very ideal balanced CDM. If he's gonna play CM you could go with a shadow but a basic gives him a more complete package.

To conclude, this card is going to stand out in the midfield. He is reliable shooting in and outside of the box and he can pick out any pass with enough space. His dribbling stats are not incredible; he's not meant to take on other cards unless you are on the edge of your opponents box. His 4 star skills will come in handy. His pace is not out of this world but for his size he's gonna be faster in game than you would think. His physical stats are really good across the board, and combined with his workmates he will do well to win the ball back.

Nice for a midfiler, a W

Very complete player with nice stats in a lot of aspects

Thats the big problem on this card, 68 agility and 70 of balance make slower and chunkier the player, with an engine you can use it but you have to know have to use chunky player, it doesnt really matter buecause its a midfiler but its make the gameplay horrible

-A little bit slower than 81 of pace