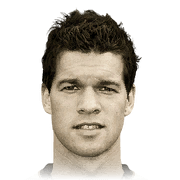 -
Sub out
Upcoming Matches
P. Chemistry
Squad chemistry
ST
84
RW
81
LW
81
CF
84
RF
84
LF
84
CAM
84
CM
85
RM
82
LM
82
CDM
84
CB
82
LB
81
LWB
81
RB
81
RWB
81
Reset
Basic
Sniper
Finisher
Deadeye
Marksman
Hawk
Artist
Architect
Powerhouse
Maestro
Engine
Sentinel
Guardian
Gladiator
Backbone
Anchor
Hunter
Catalyst
Shadow
Comments
Reviews
0
/600
Click here to verify your account in order to comment Update my avatar Dos and don'ts
Top Rated
New
Controversial
Show comments
Top Reviews
Only logged in users can submit a review
A review must be written in English
At least 200 characters are required.
Compare this player to other similar players you have used(optional).
If you import your club to FUTBIN or send us an image with the player data(fill the form below) your review will be marked as verified.
Include what you liked about the player in the pros area and what you disliked about the player in the cons area.
Your review will be manually checked during the next 24 hours.
Chem Style Used
Formations
Position
Rate Player Base Stats (1-10)
Pace
5
Shooting
5
Passing
5
Dribbling
5
Defending
5
Physicality
5
Most Used In:
Submit Review

I did a base Icon roulette and you can imagine my excitement when I had surpassed all of the stinkers to get a top 9 Icon and when I did Germany, first of all I got baited by Loan Klose, but I was very happy to see Ballack because I mixed his stats up with Matthaus, so when I saw 72 pace my heart dropped but nether the less I persevered and I replaced him for my rule breakers Nkunku who I built a great hatred for through this black friday weekend league. But when I went into my first fut champs match and my opponent had base Puskas, which presumably was from a the base Icon pack, I grew a great jealousy towards my opponent but none the less I persevered hoping that my base Kante would save me from Ballacks 72 Pace. The game went well with a 3 - 1 victory to me and Ballack on the goal sheet on his debut. (Have you seen the long shot and shot power stat I couldn't resist) I w say that his defending was decent and his pace was bad, but that was because I had given him a shadow so Kante and inform Marquinous didn't have to do all the work. I played 8 more games after that before I had some fried chicken for lunch and after lunch I had came to the conclusion that he is a BIG baller. He had a stellar 7 G/A contributions in 9 games even though he played at cdm, I kept 4 clean sheets which was bizzare and I won 8/9 games.

His passing is superb