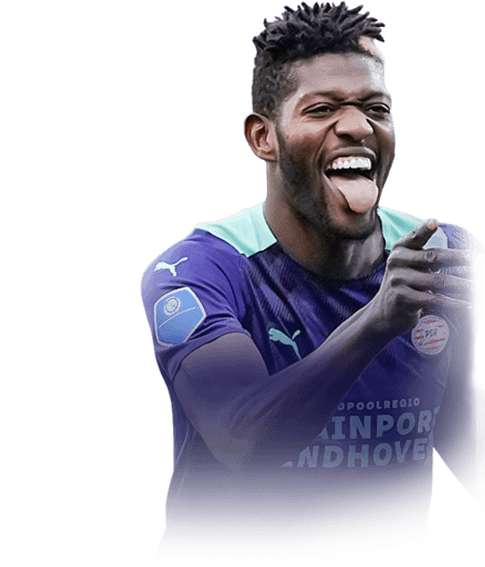 2
Red
Upcoming Matches
P. Chemistry
Squad chemistry
ST
77
RW
76
LW
76
CF
77
RF
77
LF
77
CAM
77
CM
80
RM
77
LM
77
CDM
84
CB
85
LB
82
LWB
82
RB
82
RWB
82
Reset
Basic
Sniper
Finisher
Deadeye
Marksman
Hawk
Artist
Architect
Powerhouse
Maestro
Engine
Sentinel
Guardian
Gladiator
Backbone
Anchor
Hunter
Catalyst
Shadow
Comments
Reviews
0
/600
Click here to verify your account in order to comment Update my avatar Dos and don'ts
Top Rated
New
Controversial
Show comments
Top Reviews
Only logged in users can submit a review
A review must be written in English
At least 200 characters are required.
Compare this player to other similar players you have used(optional).
If you import your club to FUTBIN or send us an image with the player data(fill the form below) your review will be marked as verified.
Include what you liked about the player in the pros area and what you disliked about the player in the cons area.
Your review will be manually checked during the next 24 hours.
Chem Style Used
Formations
Position
Rate Player Base Stats (1-10)
Pace
5
Shooting
5
Passing
5
Dribbling
5
Defending
5
Physicality
5
Most Used In:
Submit Review

I had almost given up on Mr. Sensible Transfer. His Rulebreaker had been tragic for me. That 88 passing is a lie. He was as slow as Jay Bothroyd. He was a calamity of a card, and came off at halftime almost every match. Alas, I sold him to fund my CL Gravenberch.

Weeks passed and something at the back of my mind kept nagging me. It said, "Sanagre is so clear of Gravenberch. You should use him."

But I fought off the demons. Sure, Sangare is the second best player in the Eridervise IRL (behind Mo Kudus of course), but Gravenberch is the Dutch Gullit in FIFA. No other Eridervise midfielder comes close to his skill. Or so was the case until December the 3rd of 2021, when EA would release the Irish Keane himself.

I hurriedly did the 82 rated squad, thinking it to be some POTM Vardy type of error. An 82 rated squad for an endgame CM? Surely a mistake. But I had been let down by a deceiving Sanagre before. I quickly moved Gravenberch to the reserves, solemnly expecting to be disappointed by POTM Sanagare within the first few games. Boy, was I wrong...

This card is immense. He is everywhere in the middle. When my Remi the Rat from Ratatouille opponents play a no-thought pass down the center, Sanagre is there to win the ball. When they try and counterattack off a corner, Sangare is the guy to stop them. When they go for the kickoff goal: Sangare merely breathes and they lose the ball. Nah, but in all seriousness, this card is cracked for me. Crazy interceptions. Crazy strength. I whacked a Shadow on him, and he is so good. Passing is alright. Pace is good enough. Dribbling is... well, different. Shooting is crazy from range. I've only recently started using timed-shooting, and Sanagre is crazy with it. The shot power is crazy. I'm looking at the card's stats while writing this and I was shocked to see only 83 shot power. It feels like 183. It's break the net kind of shot power.

If you're running an Eridervise or Irish setup, it's definitely worth picking this guy up for cheap. He is not quite as good as Gravenberch, but he also isn't 100k. In any case, he's going in my squad for the time being. I love these Eridervise POTMs and these Eridervise cards in general. Keep them coming, EA! (Please, I need Madueke)

Well, that's it for the actual review. Have a good day!

Hello, this is a review of one of my favourite players: ''Ibrahim Sangaré''

First I used his rulebreaker card. Despite him being my favourite player, I didn't liked the card. He just have the physicality that he has irl.

First I thought it was going to be Bruma POTM, but no, it was ''Ibi the Beast''. I was very happy and immidiatly did the sbc and wow what a card.

His pace is fine for the cdm position. I don't shoot a lot with my cdm's but his long shots are OP! He also comes in the box a lot and scores a few goals here and then. His passing is ok, not as good as his rulebreaker of course but fine. His dribbling stats are also fine but he doesn't feel that agile on the ball (so an engine chemistry style is recommended if you want to fix his balance!). His defending is so good! I used a lot of good cards in the game but Sangaré just feels different because of his height. Intercepts everything and tackles everyone he can find! His stamina and strength are superb. with that 98 strength he pushes everyone of the ball and that stamina is just lovely. He also is everywhere on the pitch! If someone comes up (with their Mbappe, Neymar etc.), he just teaches them a lesson.

Conclusion: Do this SBC and you will not regret it! And if you can't fit him in your team, then at least put him as defensive super-sub!

(sorry for the bad English Grammer, I am dutch so sorry!)