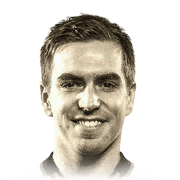 -
Sub out
Upcoming Matches
P. Chemistry
Squad chemistry
ST
76
RW
83
LW
83
CF
81
RF
81
LF
81
CAM
84
CM
87
RM
85
LM
85
CDM
88
CB
84
LB
90
LWB
90
RB
90
RWB
90
Reset
Basic
Sniper
Finisher
Deadeye
Marksman
Hawk
Artist
Architect
Powerhouse
Maestro
Engine
Sentinel
Guardian
Gladiator
Backbone
Anchor
Hunter
Catalyst
Shadow
Comments
Reviews
0
/600
Click here to verify your account in order to comment Update my avatar Dos and don'ts
Top Rated
New
Controversial
Show comments
Top Reviews
Only logged in users can submit a review
A review must be written in English
At least 200 characters are required.
Compare this player to other similar players you have used(optional).
If you import your club to FUTBIN or send us an image with the player data(fill the form below) your review will be marked as verified.
Include what you liked about the player in the pros area and what you disliked about the player in the cons area.
Your review will be manually checked during the next 24 hours.
Chem Style Used
Formations
Position
Rate Player Base Stats (1-10)
Pace
5
Shooting
5
Passing
5
Dribbling
5
Defending
5
Physicality
5
Most Used In:
Submit Review

4.5
What a player
23 users liked this review

I got him in my mid icon pack and i was hyped to try him out, his passing is top tier, pace is good, shooting is okay, defending top tier and physicality okay, i play him as a cdm in a 4-2-2-2 along side guendozi, i mean what can i say literally kante on steriods. Only cons i would say are his shooting i mean he can score if he needs to, and his strength and agression but i would say cuz of his high defending and interceptions that you cant feel them that mutch.

Intercepts almost every pass like kante but on steroids

Yesterday I got lucky and packed him out of the mid Icon pack. After that I played my whole Fut Champs qualification and I have to say that he is the perfect CDM, who can also work with ball. I play him alongside Baby Vieira in a 4222 and he is probably better than Vieira. The best way to describe him is Ngolo Kante who plays insane passes and dribbles like an offensive player. I would highly recommend him, because he works in division perfectly for me.

Well, I packed Lahm from mid Icon pack last week and in the first moment I was kind of happy cuz he looked like a very variable and playable card.

I am playing in Elite Division with around 1950 skillrating and I aim for 16 wins every weekend what I sometimes achieve. My favorite formation this year is 41212(2) and in my eyes the three midfielders in that system are the key to success. I was very lucky to get the red Kante last week so the dm position gives no room for discussions. Thats why I tried Lahm to be the richt b2b midfielder but this card really is not made for that role. I also tried him instead of Kante and oh lord even if both share about one price tag Lahm is much worse. Then I decided to play him at right fullback where he really outperformed most time of his career but he does not seem quite right there due to his weird habit of getting into the center of the field way too often in game.

Long story short considering all the positions I let him play I think this guy only works as a stay back dm. There again I can assure you he is not worth 700k.

Compared to Kante sif, both with shadow chem style, he is kind of slow. I know the stats tell you else but like Dalglish being faster than Icardi Kante is faster than Lahm. His dribbling is alright, average, but he feels clunky when getting under pressure. The only point I really like about mid Lahm is his passing. Man he assists very well from every position I played him on. His defense skills also are very well obviously but that is what you expect for that price and even they get a huge con because of very his bad strength and aggression. For sure my constant comparing to Kante sif lets his physics feel even worse. H/H WR can be nice but playing him as a stay back in the formation I mentioned it makes him advancing too high up the pitch leading to horrible counter attack invitations at some points. 3/3 not what you like not what you need.

All in all I can tell you guys if you got 600-700k left for a dm, do not choose him. He sometimes has his moments but I would say he is way too overpriced. Take Kante and enjoy him instead.