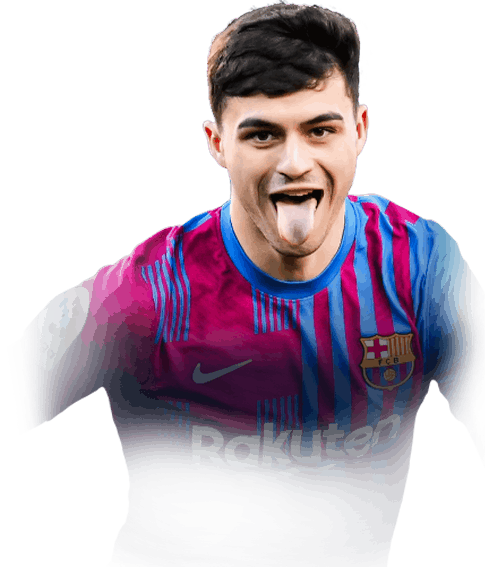 If you tuned into the TOTS Fati Objective review then: 1. I just want to thank you for the continued interaction with these reviews, I love the feedback in the comments and appreciate guidance on possible position and chemistry changes. 2. You would have already known that this review was coming and I seriously couldn’t wait to dive in and write about this card. Some serious questions were thrown around about how deserved a Pedri TOTS card was given his limited minutes this past season, but regardless of merit they certainly didn’t hold back in the statistics.  The Future Stars version of Pedri is one card I never quite had enough time with, only using him for one round of qualis and Div Rivals mid week, but man what an enjoyable few games that was.  The link up with Future Stars ST Ferran Torres was a special one and are two cards that constantly give me nightmares when I come up against them as well.  With the Ansu Fati objective secured I picked up Pedri for a decent price, dropped him into my box to box midfield, applied the HAWK chemistry style and all was set for a great Weekend League adventure.  But of course Fati was definitely not doing the business for me as expected and soon shuffled everything around, playing Pedri as a FALSE 9 ST (so basically a CAM) for the first half of every match, before then dropping him back into the box to box CM role to end each match from a deeper position.  With all of that sorted, Pedri played the metronome all weekend long in the following squad: 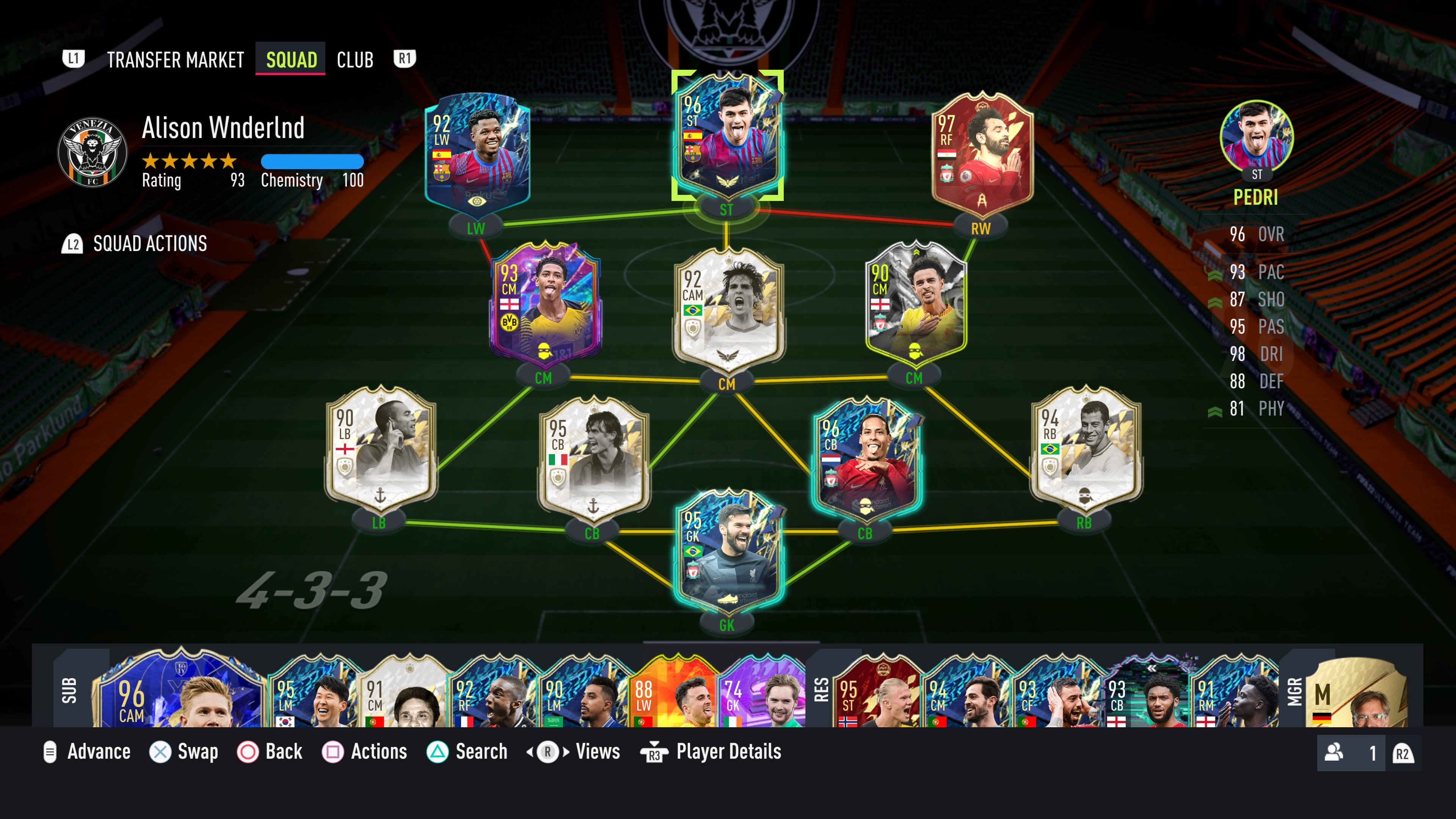 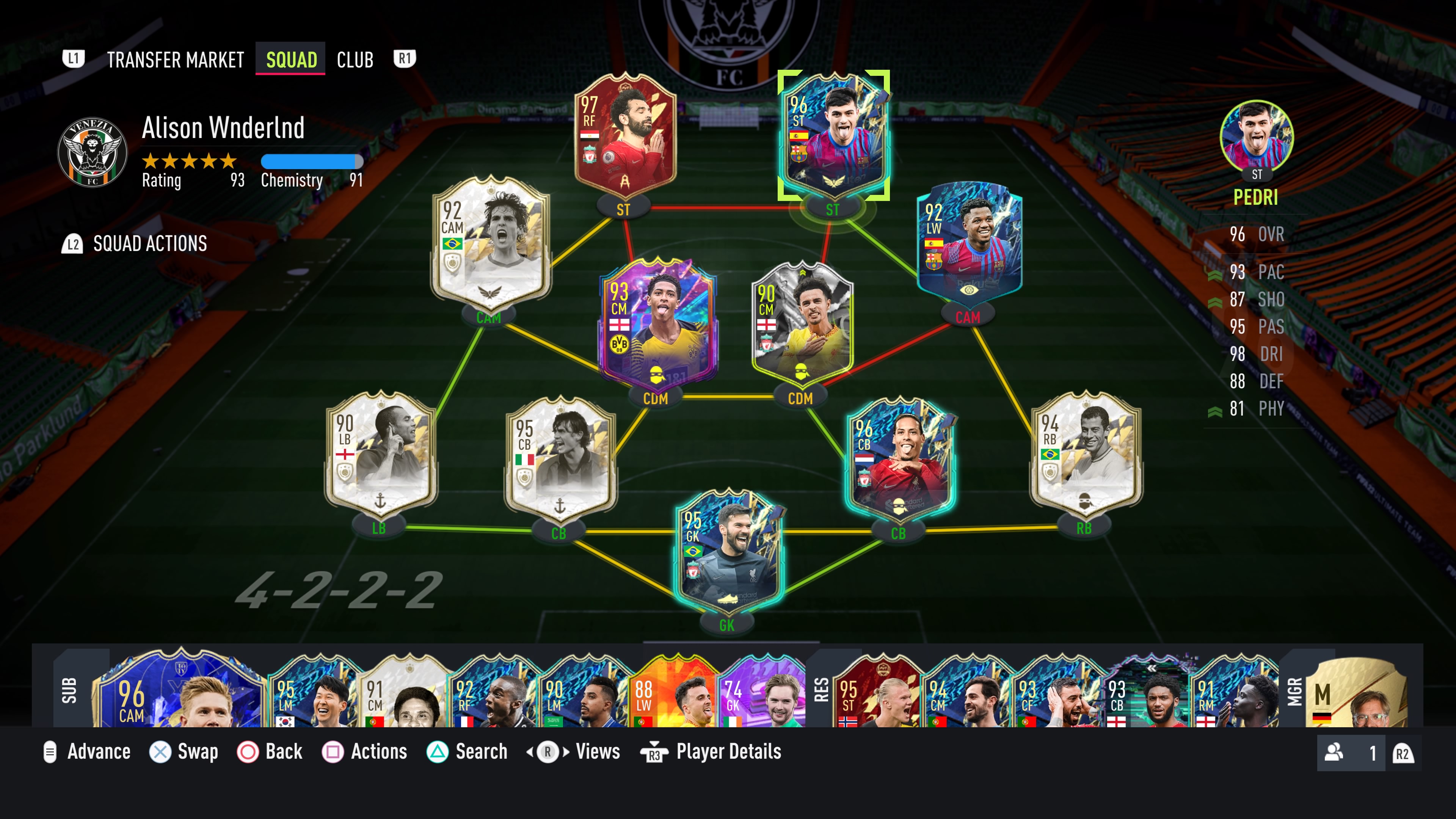 “What an idiot playing Pedri as a ST” … fair enough mate you are the grand master of positioning.  But don’t knock it until you try it.  I am telling you this card was a revelation in the False 9 role and truly set a lot of what I did well this weekend into motion.  In fact I actually felt the impact Pedri had on the match dipped ever so slightly as he moved back into the box to box role that most FUT Managers would deploy him in.  If you play a formation with a CAM then it is a no brainer… but for other formations I wouldn’t completely disregard this as an option.  But I won’t deny this card was boss as a box to box CM and truly could do just about any attacking or midfield role with a touch of class.

I will say with confidence that I have not used a card this year that feels so clean on the ball as TOTS Pedri.  Responsive, rapid, ridiculous, and just really really good.  There are others that I would put alongside Pedri in the list of ultimate dribblers, but none can eclipse the Barcelona boy.  If you watch the video you will see some of the nicest patience I have shown this year and it was all from the confidence this card gave me with the left-stick dribbling.  The 99 ACCELERATION is on point and honestly I noticed zero drop off with the 95 SPRINT SPEED either.  The mixture of the FLAIR trait, 99 AGILITY, 99 BALANCE, 97 BALL CONTROL & 98 DRIBBLING is as sublime as it looks on paper… and even the 5 STAR SKILLS are available to you freaks on the sticks out there.

For a card that most would never consider as a striker… this card was no slouch in front of goal.  The 99 POSITIONING starts everything off regardless of where you deploy the Spanish starlet and sets everything in motion for potential efforts towards goal.  The bump to 95 FINISHING is nice, while the increase to 96 SHOT POWER is vital.  The 4 STAR WEAK FOOT felt like it was calibrated perfectly, with Pedri missing only the odd chance on his weaker left foot.  Of course most will see Pedri as a deeper option and the HAWK takes care of this as well adding +10 for 97 LONG SHOTS.  The odd miss on the left and the very suspect 73 VOLLEYS the only chink in the Spaniard’s aresenal, but still a fantastic finisher.

1.6 million is a small fortune in FIFA 22… and when you can buy 90 Gullit for the same price you better deliver at a massive return.  Of course I am not comparing the two, but it does bring into context exactly how much Pedri will set you back.  But if you weren’t convinced by the Pace, Dribbling, & Shooting… there is still a bit more to say.

I referenced a metronome in the introduction and this card is well and truly a pace setter for any squad.  If you want to utilize the pace and dribbling you can get a squad moving in a hurry with Pedri at the heart of the attack.  However, I loved the fact that I could also slow down the match and control the possession given the 99 VISION, 99 SHORT PASSING & 99 LONG PASSING that come ‘stock’ with this card.  In the end that is the key to this card overall.  It doesn’t matter how you deploy him, what formation you play, which chemistry style… This card delivers the goods and has the statistics to make it work.  Even the 99 STAMINA ensures whatever your choice, Pedri will be there come the 120th minute, still delivering and producing at the level he did from kickoff.

Obviously with the size of this card, the 77 STRENGTH is exactly as advertised and this card is not bullying anyone in the center of the pitch with his power.  However, the bullying looks a little different with this card and Ivan Toney might have said it best when he claimed Manchester City’s “year 11s stole our ball.”  Pedri bullys the match in a different way that uses precision and class to keep the ball… while using speed and closing ability to win it back quickly and efficiently.  Even in a game where Gullit and Viera are commonplace in every midfield, I felt Pedri stood up well and played around their presence as opposed to through it.  This card is a ‘must try and you will enjoy’ for me.  Pedri is a fun option in a game that doesn’t always deliver in that category.  Hoping you are safe and well.  Cheers for reading. 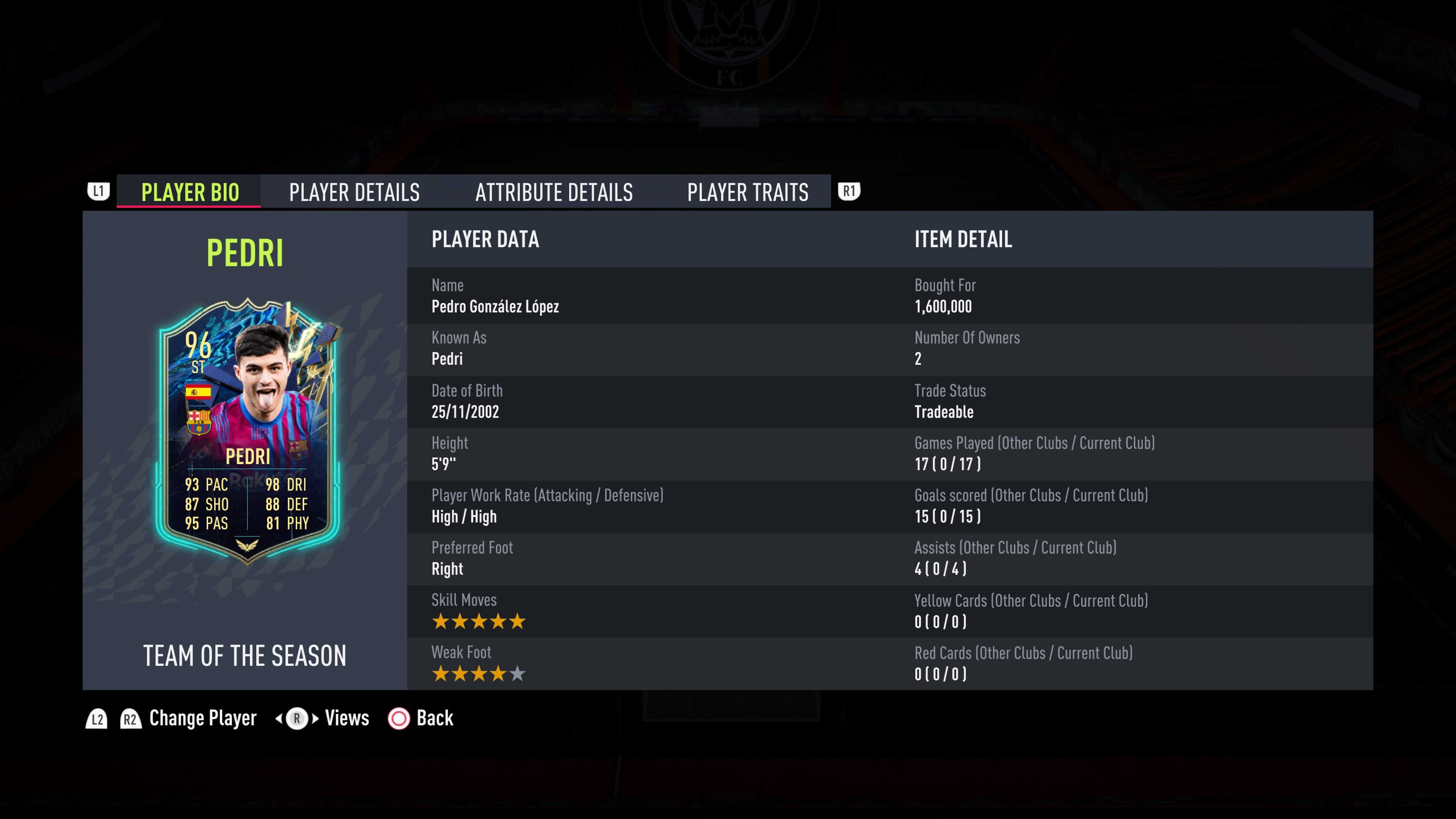 Nobody feels like Pedri on the Ball, its unbelievable. He's the best player I've used on this game by far and outshines Messi, Ginola and Mbappe in most ways! He reminds me of 96 Acuna last year with his high/high workrates, 5* skills, pace like Mane, unnoticeable 4* weak foot and passing like Pirlo on crack. I managed to get him in a two rare player pack yesterday and have played 5 games with him scoring 6 and assisting 4 in champs quals. I'd never thought in a team with Mbappe, Messi and Rooney that I'd be forcing the ball to Pedri but he's just something else. Of course he's not perfect, he is 5"9 with 63 Heading and 70 strength, doesn't have a real face which kinda sucks if u like celebrating goals and only has 84 shooting. Also, bc of his small size and low strength & 83 Positioning, playing him CDM is difficult while 84 shooting lets him down a bit going forward. But still despite his weaknesses, every game I played with him at CAM in a 4231 he dominated and created chance after chance. At this point in the game cycle, I think he's clear of every player as an attacking mid. The ability for him to track back with speed, win the ball and then go forward with amazing passing, skill and dribbling is unbelievable and sets him apart. Upgrading his shooting and physical with a hawk totally offset his weaknesses for me.

Since I was free this friday, I decided to play all 20 of my champs games. This was the sweatiest WL i've played this year by far. Anyways after finishing 11-9 as always I opened my picks and to my surprise I got pedri, the only card i wanted. After getting him, I build a team around Pedri and played 15 rival games. Played him CAM in a 4-3-1-2 with Kane and Fati as St's.

-Agile and small, super easy to dribble past opponents

-Every single pass is inch perfect

-Physical was a problem against bigger defenders like Sule or Laporte

Bought him for nearly 1.6M it makes him the most expensive player I've ever signed in FIFA history, and to be honest I'm kinda disappointed. Overall he is an amazing player. Just by looking at his stats he has what I search for on a CAM (LOTS of pace and dribbling, and NICE shooting and passing). But fairly he hasn't performed the way I expected. In-game when I do my substitutions I place him at LEFT CM. He also has the stats I look for on my left centermid (basically good pace and almost gullit gang). And at this position I gotta say he is way better. But to be honest, I'm a "humble" player and I can't afford him. I expect my CAM to be the best player on the field and I can't say Pedri has been the best. If you are RICH in FIFA I highly recommend him as CM, but if you are not there are many other players that are similarly good.

(To bring context, I give a lot of importance to my midfield, CAM has to always be there for me and be an absolute player. LEFT CM is the all terrain, off road player i search for. RIGHT CM I make him stay back and I search for a BEAST like Kessie, Camavinga...)

NO FACE MADE IN GAME: Just sad.