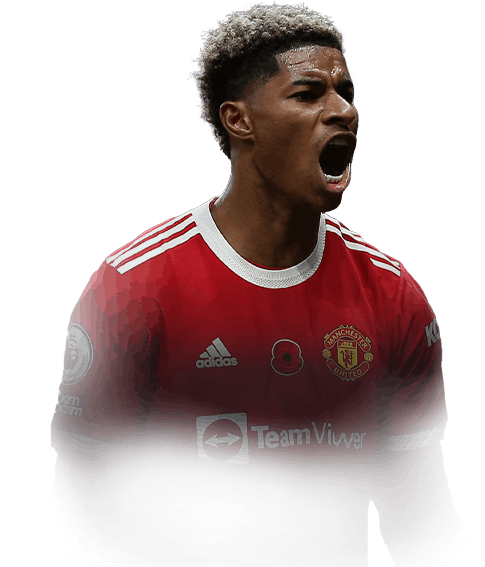 It seems like only yesterday that I was reviewing 86 IF Marcus Rashford in FIFA 21, singing his praises after one of the most potent striker performances that I have ever witnessed.  After getting the Manchester man in my first set of red picks the card then went on to play hundreds of matches for me last season.  Unfortunately, the later versions of Rashford in FIFA 21 never quite lived up to that early standard and ultimately left me skeptical going into this weekend’s review.  What I didn’t realize about the key to 86 IF Rashford, was just how far ahead of the power curve he was at the time.  With his future versions, this was no longer the case and issues such as his more clunky feel led to unexpected frustration.  But I was well prepared for a letdown this weekend and avoided the trap of the mesmerizing statistics this card has to offer, and instead expected a ruthless finisher with a less than ideal body type and feel.  With that in mind, it was the application of the ENGINE chemistry style to loosen up the Englishman as he led the line in my 4-2-2-2 formation this weekend.  Despite my reservations, Rashford put on a knightly performance all weekend long in the following squad: 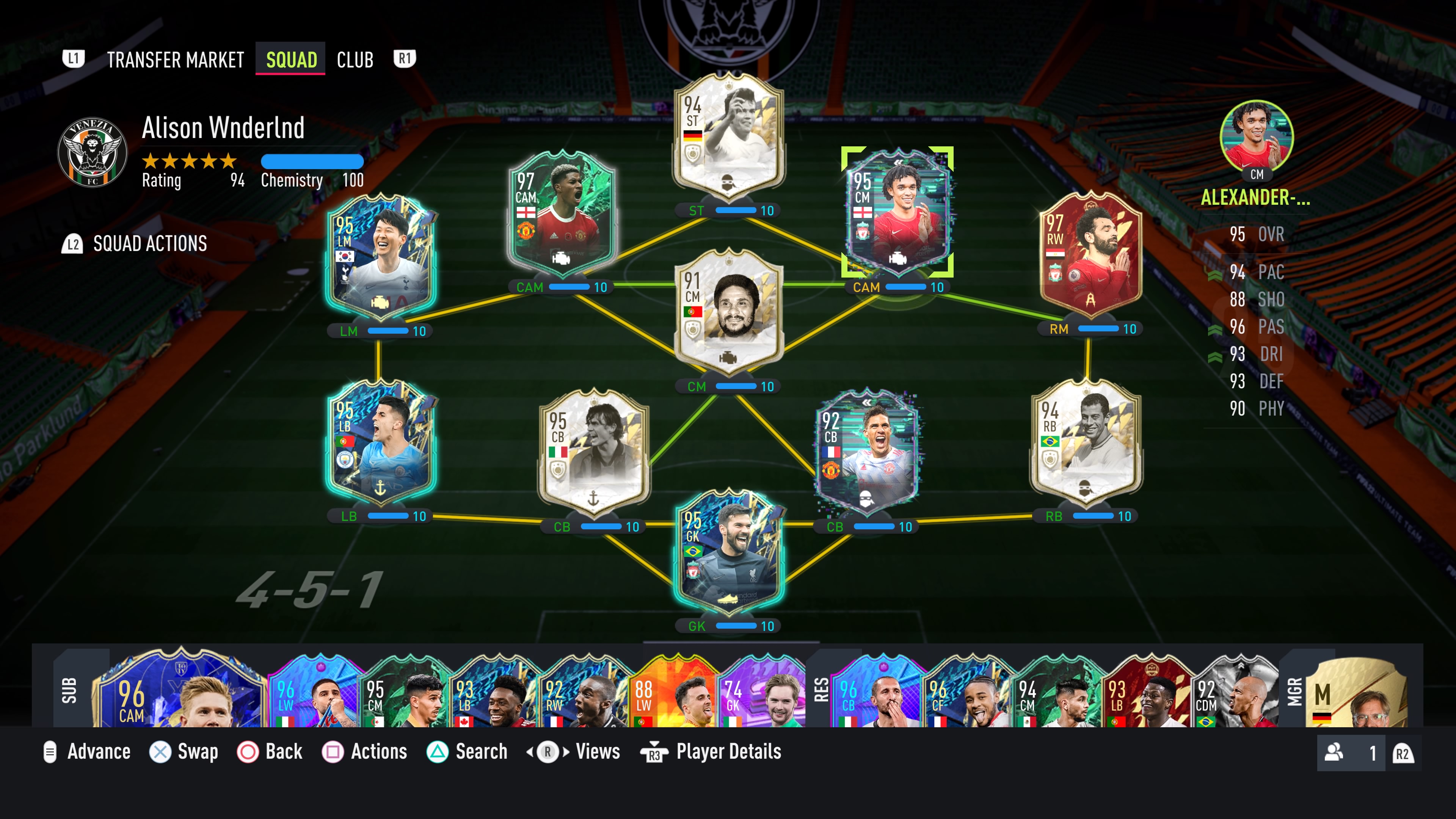 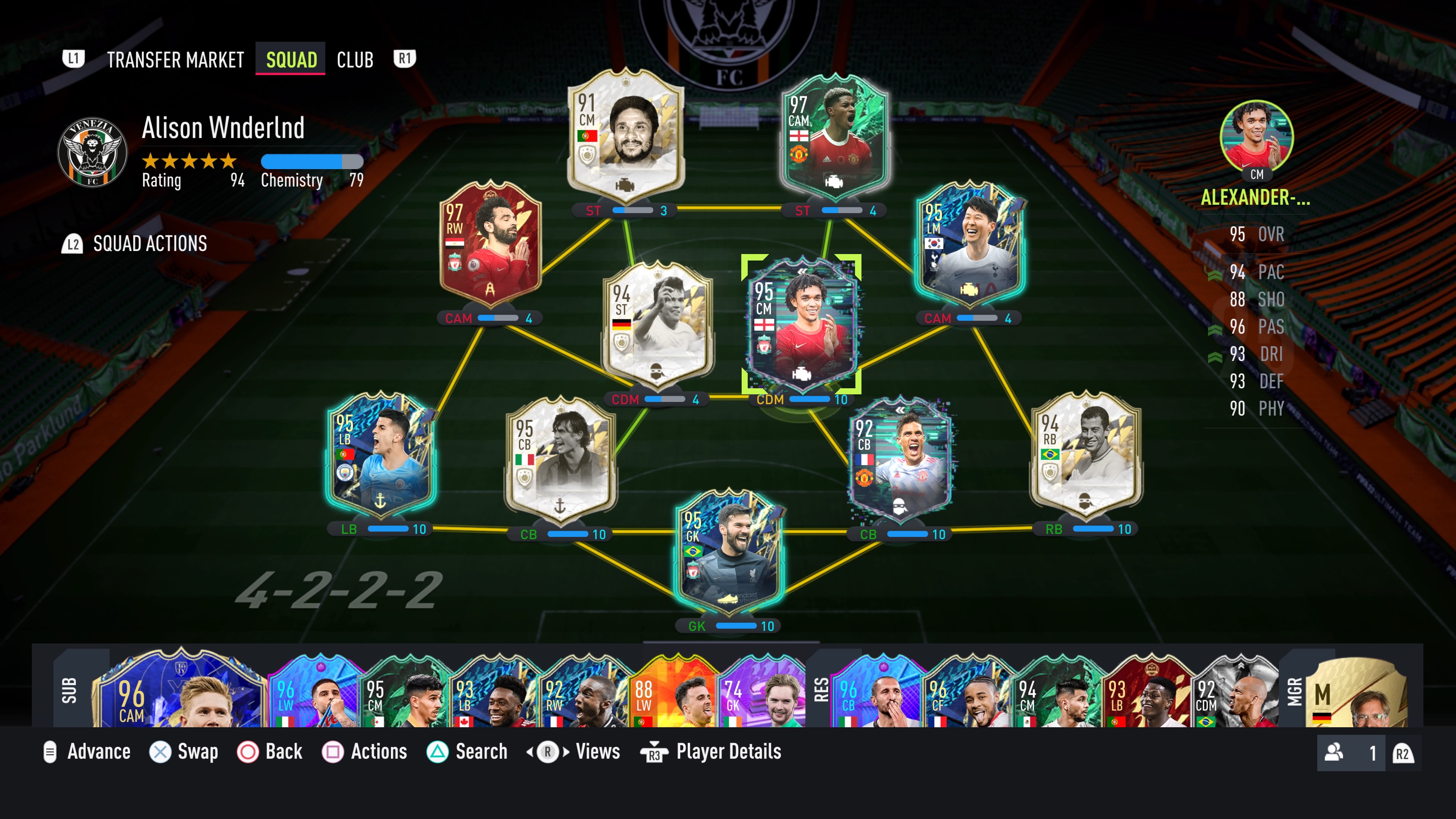 Within minutes of this review starting, it was clear that I was dealing with a different animal than I had expected going into the weekend.  Rashford feels rapid in game and has a quickness about his first step that adds to the effectiveness in the dribble.  There were some “clunky moments,” but more often than not it was in already atrocious gameplay.  All in all, I couldn’t have been more wrong about how this review would go and generally enjoyed the presence and effectiveness of Rashford in my squad.  The 15 goals in 15 matches was a healthy and expected return, while the 7 assists were both a pleasant surprise and a huge selling point for this card.  The strength and link up play were an added bonus to a very well-rounded striker performance this weekend.

Dribbling might not be the key selling point for this card, but it was certainly the make or break category for the quality and enjoyability of this review.  I prepared myself for a clunky operator …  and what I got was a lanky speed demon slingshotting around the pitch throughout the review.  Rashford passed the eye test in terms of his movement on the pitch… while the 99 AGILITY & 96 BALANCE passed the feel test as the left-stick dribbling proved responsive and devastating.  True, in poor gameplay this card could feel “stuck in the mud” at times, but on the whole, Rashford was a nightmare for defenders to pin down.

99 SHOT POWER.  I should have just gone with that statement and left the rest for interpretation, and truthfully it implies exactly what I experienced with this card.  The 97 POSITIONING was relatively solid and had Rashford picking up dangerous areas in and around the box… the 97 FINISHING felt accurate and devastating for the majority of the chances that fell Rashford’s way… Even the 95 LONG SHOTS & 85 VOLLEYS chipped in at times during the weekend… But the shot power is truly where the potential lies with this card.  It didn’t matter if I was point blank in front of goal, 25 yards outside the box, or on his 4 STAR WEAK FOOT, Rashford absolutely cannons the ball towards goal.  The velocity of the strikes makes even the most acute angles dangerous and left me feeling extremely confident in Rashford’s ability to end any move I could manufacture.

1.35 million coins is a heavy price tag to pay.  I would have added, “especially for a card without a 5 STAR WEAK FOOT” if I had not witnessed this card generally disregard the notion that his left foot should be weaker.  I do think that any card over a million coins carries a massive risk that it could be down 300k by tomorrow, but the quality is certainly there to warrant the upfront purchase price.

There was a lot to like about this card during this review, but I haven’t had the opportunity to discuss what arguably impressed me the most throughout this weekend.  The combination of Rashford’s 90 STRENGTH & 99 SHORT PASSING when holding up the ball.  Given the size and strength, I was expecting a certain level of frontman play from Rashford going into this review… of course, I expected his turns to be a little slow which would impede generating offense… and I also expected a lack of guile in the passing department.  Having already discussed just how wrong I was about the dribbling, I will double down that I was also way off on the passing ability.  Even in the short video for this review, Rashford shows off an excellent passing range… Including the through ball to Eusebio at 45 seconds with a level that would make De Bruyne jealous.

Definitely up there with one of my favorite recent reviews.  I think it was probably the fact that I was dead wrong on every expectation that made it stand out even more.  But in all honesty, this was simply a fun and enjoyable review of a new and impressive option to lead the line.  It is funny, but the fact that Rashford’s ShapeShifter is actually a CAM really suits this card.  While I wouldn't have deployed the Manchester man in that role in a million years, there is a lot of quality in this card that suggests it wouldn't be a bad experiment at all.  This card gets a very assertive “must try” from me and if you have even half as much fun operating this card during your own test drive, you might just make the experiment permanent.  Hoping you are safe and well.  Cheers for reading. 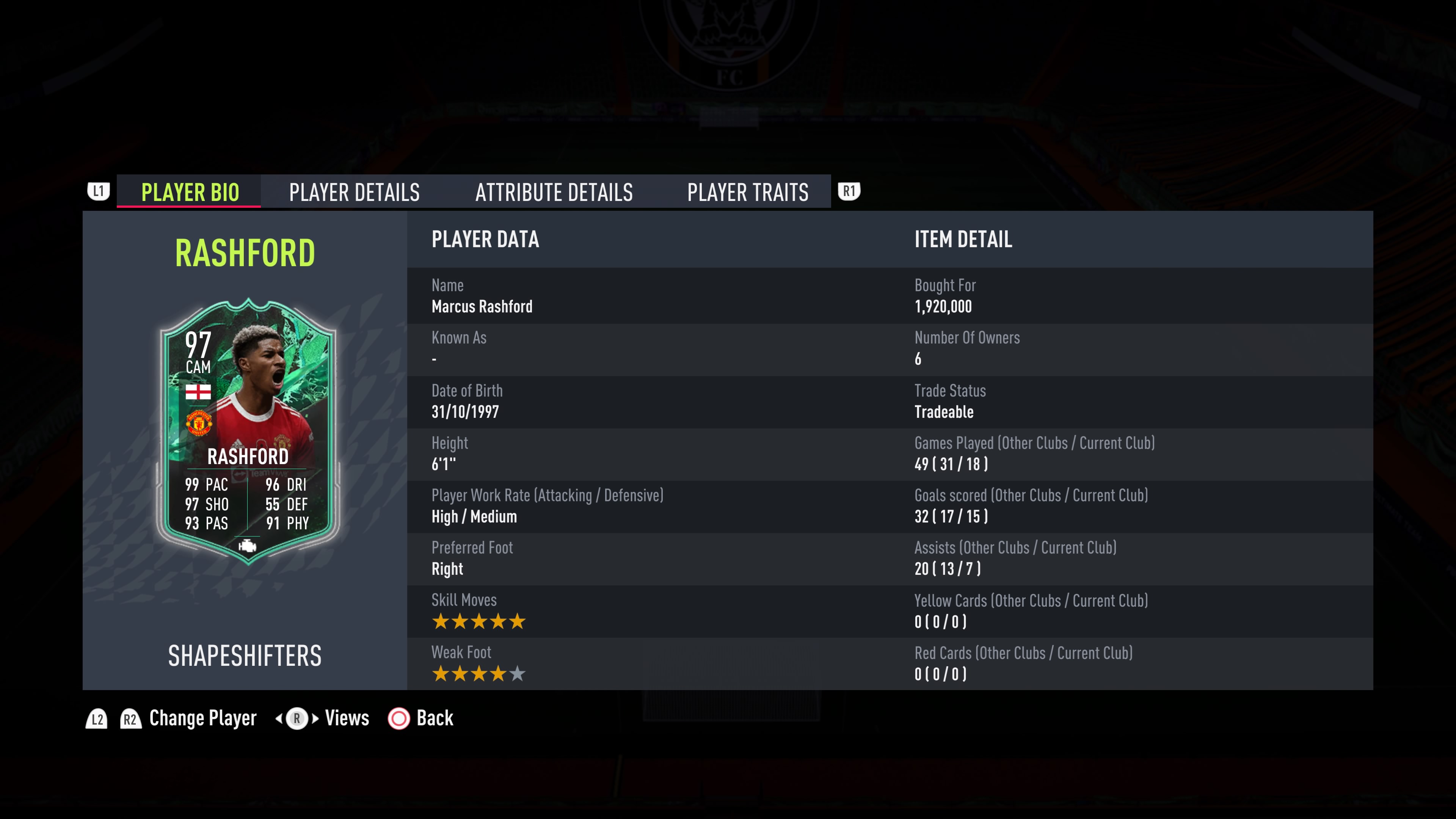 I packed Rashford from an untradable pack which was the best pack luck i recieved this fifa. Rashford is the best card i played with this fifa. Something i noticed with this card is that he was shooting better with his left than his right but that's just me.

The only flaw with this card is his balance.