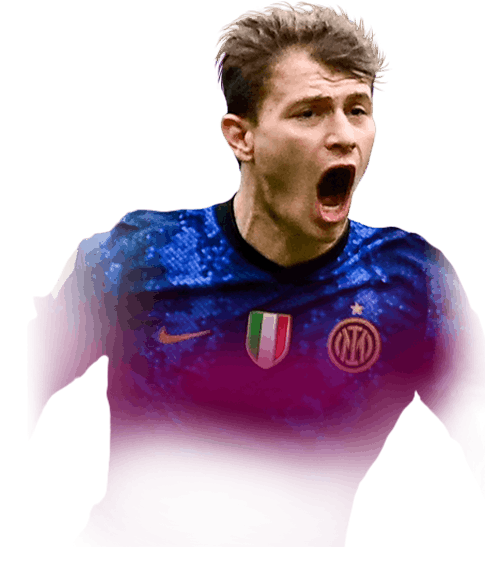 When Nicolo Barella dropped it was clear that this review had only two directions it could go.  When a card sits at the pinnacle of the game and with the most in game statistics of any card, the expectations are limitless.  With our normal review schedule back on track it would be a true test of Barella’s quality across a 15 match grind.  Given the ridiculous statistics, it was actually a challenge to pick a position… but in the end, a shift as the CDM in my 4-2-2-2 formation seemed the best fit for the Italian and my squad.  With the formation and position selected, I opted for the Anchor chemistry style to better suit the defensive demands that would be required.  Within minutes it was clear that this card was going to cause opponents issues, the question remained just how good the card would perform as the weekend progressed.  Barella was the all-action leader all weekend long in the following squad: 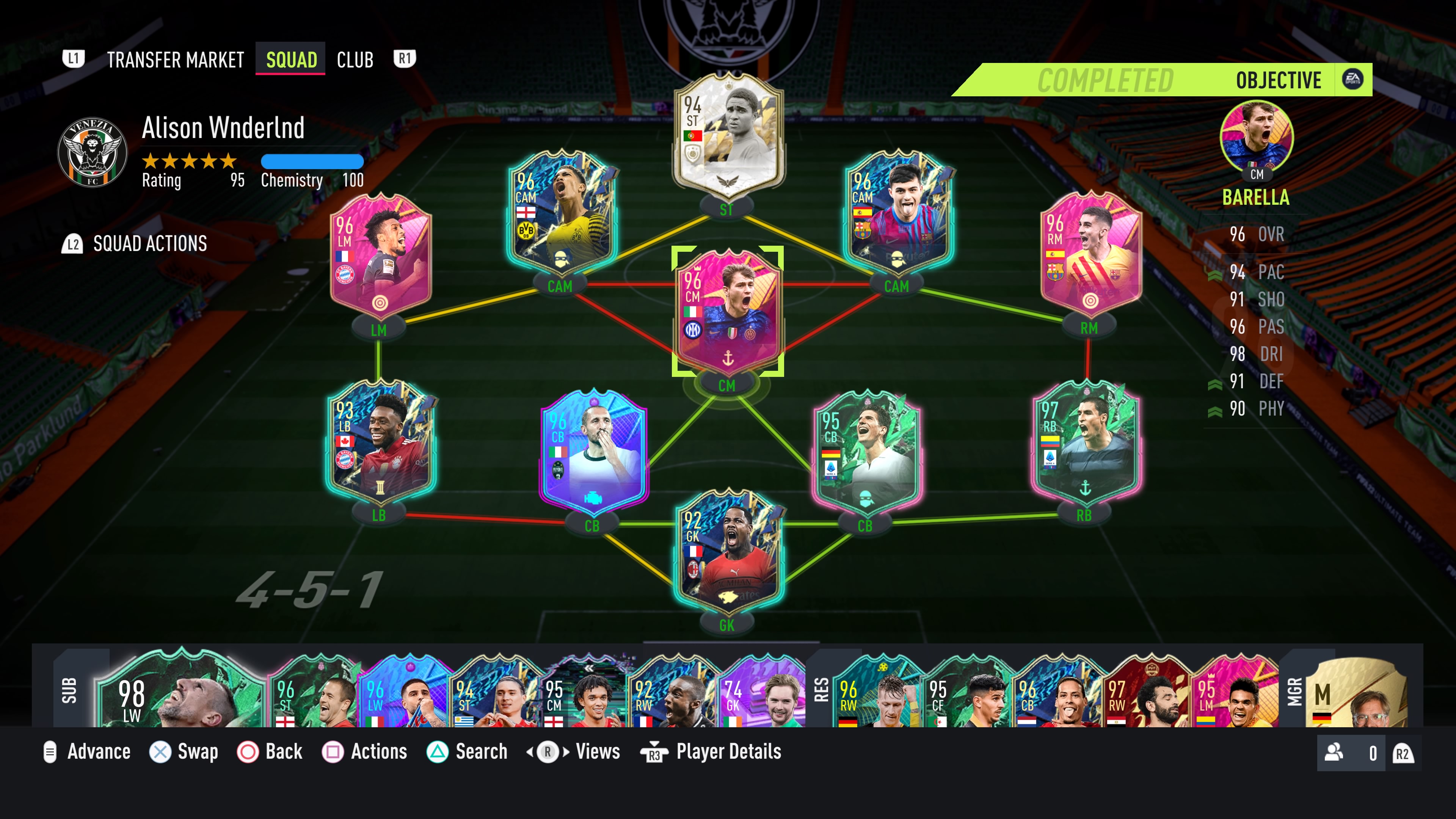 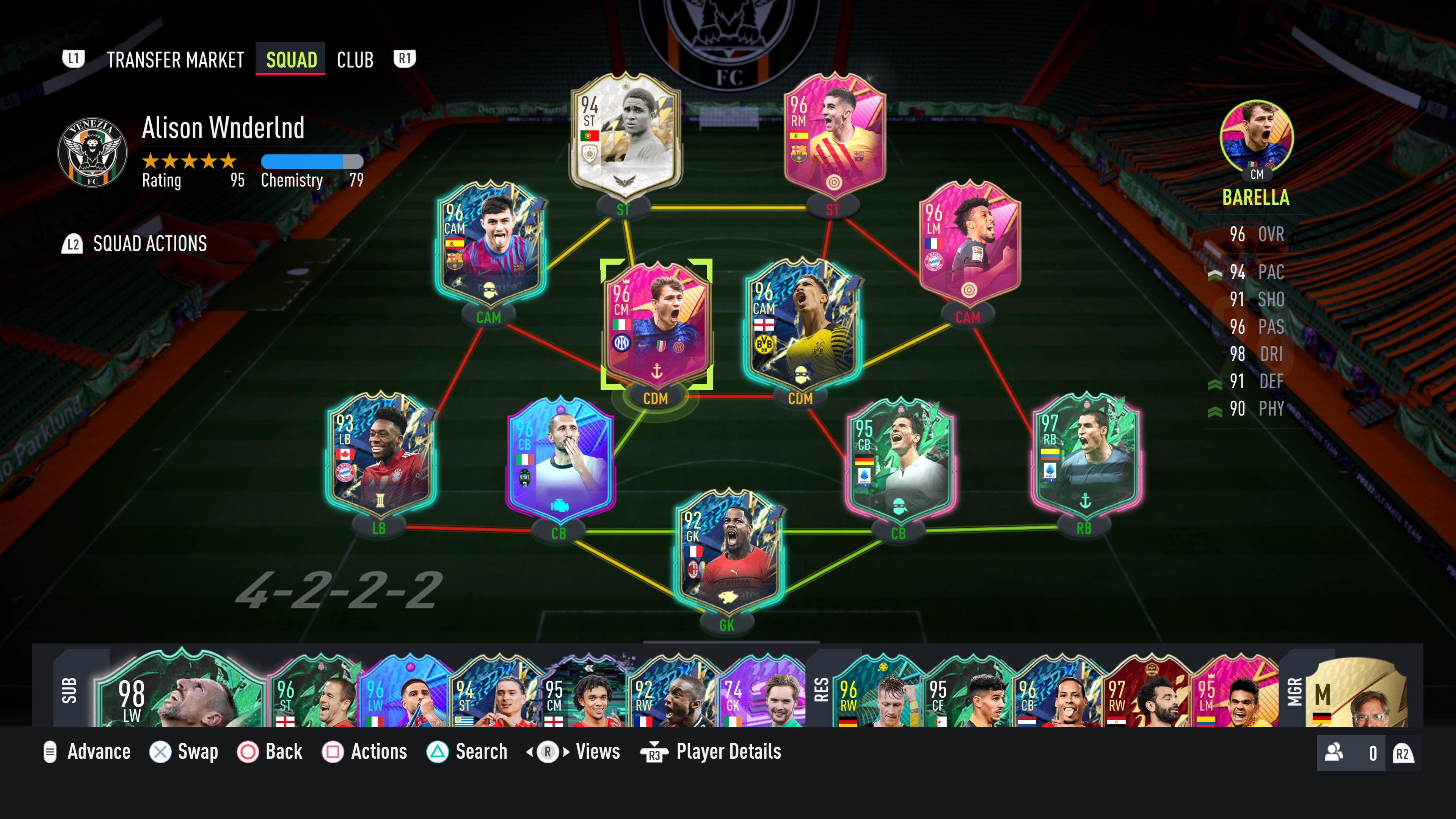 As I said, it didn’t take long to realize the quality of this card.  Like Kante in years, past Barella was able to simply reel cards in when my opponents thought they had time and space. There is an everywhere feel about this card defensively and then a surprising level of contribution offensively.  The perfect rating is not one we hand out lightly, but this card is everything and anything you want it to be.

I mentioned that this card was everywhere and one key contributor to that is the blistering and endless pace.  98 ACCELERATION & 99 SPRINT SPEED are devastating on this card.  The ability to close opponents quickly took away the time they needed to properly orchestrate counters and build up play, which resulted in rushed decisions and more turnovers.  The 99 INTERCEPTIONS were also a big factor in this as my opponents became more disorientated with what they were trying in attack.  The 99 STANDING & SLIDING TACKLE were a devastating combination and truly turned Barella into a wrecking ball barrelling through the middle of the pitch.  99 STAMINA is key to keeping this disruption operating at a high level and was instrumental in my Weekend League success.  While I did go 9/10 for physical it is worth noting that defensively the 95 STRENGTH was perfect and my minor concern came more when Barella was on the ball.

Given the CDM position this category was a non-issue and as long as Barella could pass the ball when and where I wanted I was unconcerned.  But then something happened early in my Weekend League and really started to shift my mindset on this review and this weekend.  Barella picked up the ball at half, stormed through my opponents midfield, played a nice one-two top box and slung a finessed shot into the far right corner.  From then on it was clear that even in a holding role, I had more than a stay at home midfielder on my hands.  It starts with this card being equally rapid on the ball and the near perfect dribbling statistics are responsive and effective.  After winning back the ball it feels easy to find space and dribble out to relieve the pressure.  From there the 98 VISION, 99 SHORT PASSING & 95 LONG PASSING helped find whatever option needed and delivered the ball with pinpoint accuracy.  In the end, this is all you need and makes Barella perfect in the holding role… but then the Italian went ahead and contributed 9 goals and completely blew me away.  Despite lacking the normal traits required, Barella still felt lethal on the ball and truly feels like he has the Finesse Trait.  The 92 FINISHING, 90 SHOT POWER & 91 LONG SHOTS still did the trick and were equally as effective on his 5 STAR WEAK FOOT.  If you want to play Barella in the box to box role it is no issue in the goals department, but adding goals from my CDM role was a huge boost to my club's offense this weekend.

In one or two years there will be pictures posted of this card… “remember this beast?!?” And for me, he is etched in my unforgettable card list.  Alongside TOTS Bellingham it was a midfield made in heaven and at a foolishly low cost.  150k is a steal for this card and truly the only card I can think of for better value was the Englishman playing alongside him.

This card was amazing and about as near-perfect as you can find.  The amount of fine tooth searching to find any flaws really demonstrated how incredible Barella feels everywhere and in all situations on the pitch.  But here is all I found in 15 matches: 1. Barella missed one or two chances and perhaps better traits take care of that.  2. As a midfielder up against Gullit and Vieira, Barella was quicker and more agile, but lost headers and the odd battle due to his size.  If you could somehow keep all his speed and dribbling with their size he would be Superman. 3.  Coming back to the 9/10 Physical, Barella wasn’t as strong on the ball as off it… a normal occurrence in FUT but worth mentioning.

Sadly, this marks our last review before FIFA 23.  Another year finished but ended this one off with a bang.  With Barella in the books and no more reviews to come,  but still playing Weekend League until the end… I have finally found a partner for Bellingham that matches how dominant the Englishman can be in the middle of the park.  I loved this review and that Barella could both be a defensive warrior and offensive stylist in the same package.  I can’t recommend this card more than this shining review… “must do” doesn’t seem to be enough words, but it will have to do.  Hoping you are safe and well.  Enjoy your summer and see you in FIFA 23. Cheers for reading. 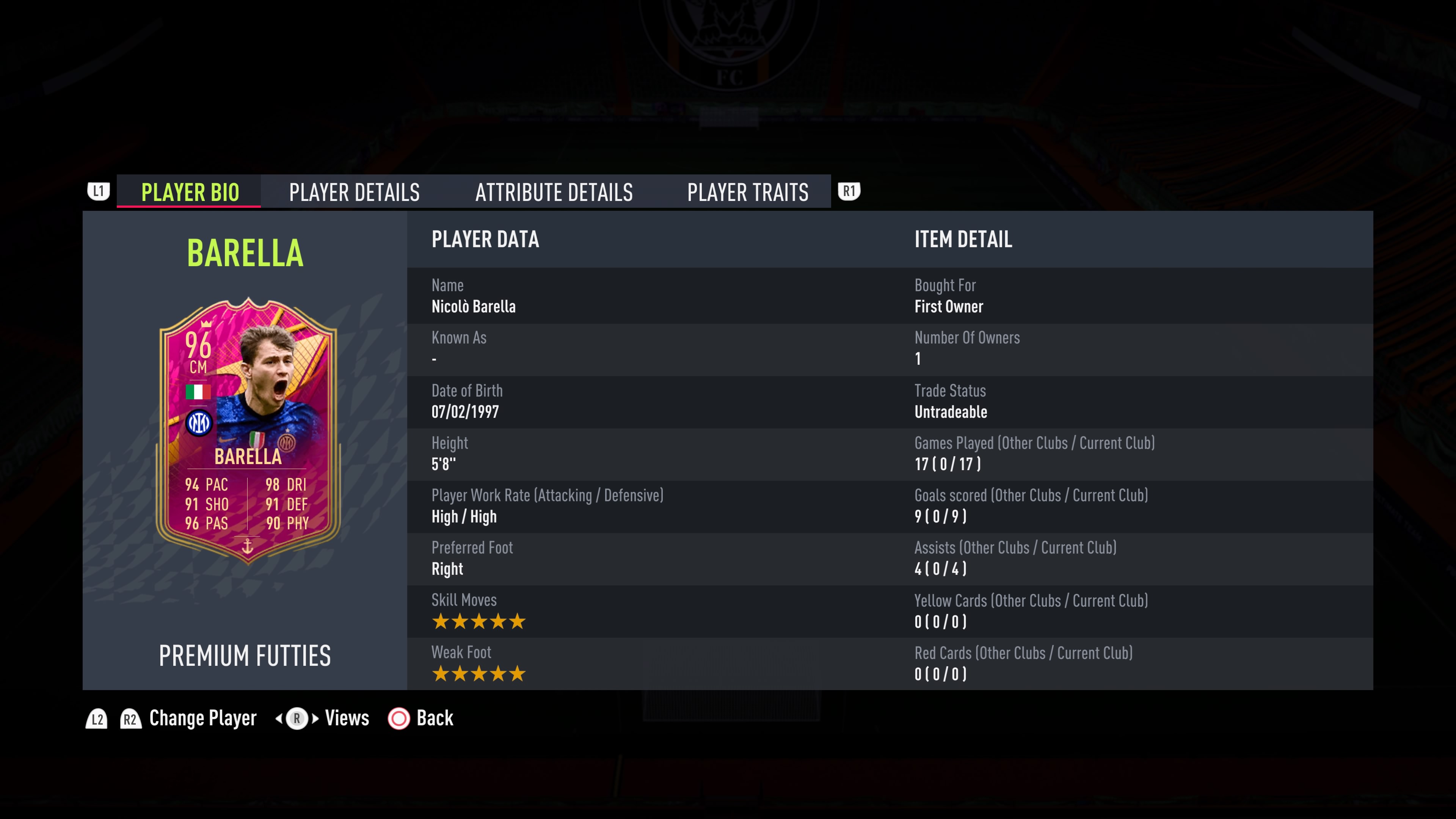 Anyone who has played this FIFA and has loved Barella as much as I have would have been equally as gassed when the voting for this card dropped. If any of you have followed the reviews I've done this FIFA will know I loved his previous cards so if you're reading this I appreciate you guys but lets get into this review.

Nicolo Barella 96. The review can be left there, gonna be a waste of time justifying how good this card is when the stats say it for you. Close to being 90+ on every stat and he's 185k. Best of all, there are so many usable Serie A cards, Cordoba, Chiellini, Insigne etc. I ran the king in a RDM in 352 with cover centre and a hawk chem style. I'd recommend anchor if you're running him more defensively but lets be honest, his stats are good enough anyway.

Currently 13-1 in WL and he has not been short of amazing for me. I've ran him next to Futties Rafinha and my word is it a fun duo.

Again, I will try to justify how much of a bargain this card is and how good he really is but already with 3k likes to 57 dislikes, I think the community have justified this enough.

Pace- Mid 90 stats on bot acceleration and sprint speed. He's quick enough to keep up with players at this stage of the game and is quick enough to out pace a lot of midfielders/defenders too.

Shooting- His AI shooting has been decent. Not popped many shots with him I'll be honest but I've loved his AI attack positioning. Felt claustrophobic in a few situations on the attack and I've found this guy just chilling waiting for the ball.

Passing- Oh my. Tiki taka, long passing, drilled passing, curved passing, you name it, his passing has been solid. Enjoyed the fact he has the flair pass trait as well. It's rare I ever try them but ot's a nice feature to a card that's already fun to use.

Dribbling- One of the best dribblers I've used. The fact his in-game stats are almost all 99 says enough. Because he's small with a lean body type makes him feel so much smoother when moving with the ball as well.

Defending- Defence has been solid for him. His positioning is good but I've also noticed his AI defending/interceptions have been so good. 98 in-game so I'd hope so but his ball recovery has been so sweet. Had a few issues where a player would intercept the ball and it would roll away back to the opponent, however quick reactions and hunger to win the ball have shown on this card.

Physical- 99 stamina. That's all. Found that the hawk helped here with the strength boost just so he has more hold up in his game and a bit more aggression in trying to keep/win the ball.

Some players may argue his height but it's not been an issue for me. Tbh, I've not had it often when aerial presence is needed on this game apart from corners but I'll leave that up to you guys.

I honestly cannot fault this card. As this will be my last review of this FIFA and for my undevoted love for Barella I'll rate each stat 10/10. I've tried to find the littlest faults with this card but I've struggled to do so, therefore I do think this card is perfect.

Hi guys, i have never written a review before but i had to for Barella because this card is just too crazy.

I did him the night he came out because i had fodder and he fit perfectly in my team. I have played 41 games with him and he´s been crazy, hes literally everywhere.

He is incredibly smooth and his dribbling is one of the best in the game for sure.

since he is so short he feels very nice on the ball.

his defending and physical are also very good, he intercepts very well and he lasts an entire game without any issues.

not only that, he is also fantastic offensively (20 goals in 40 games as CM)

If he fits in your team and u have fodder, definitely do him. He´s cracked.

Heading (If u care about that)

Maybe strength but its not a huge issue.