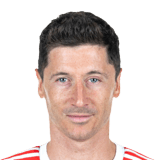 His real-life stats are currently 13 goals and 4 assists in 15 matches in domestic competition. He also received 2 yellow cards and 1 red cards.

Ok, i bought Lewa for 100k, I have him and Vinicius as Strikers with Benzema as a CAM, for the game that is now, he is good, you need to know how to use him. He is not the type of Counter Attacks, Get in behind man, he is the perfect Target Man if you ask me, that's why you have a target Man and a Very quick and agile next to him.

Played him 10 games in WL qualifiers, finished 8-2 , he returned 18 goals and 5 assist, thats not a bad number.

He is meta? No. He is good for this state of the game? Yes

With hawk you will make him lenghty, sometime he will win some long races on long distances, like 20 meters, but you will boost his shoting and physical to the extreme, the atributes where he is excelent.

Lewa is a clunky player, like his previous TOTYs, TOTS cards, they feel the same , CLUNKY, if you want to play him as a target man, he is good, if you wanna play quick attack, stop reading and move to the next player.

-Clunky is his other name