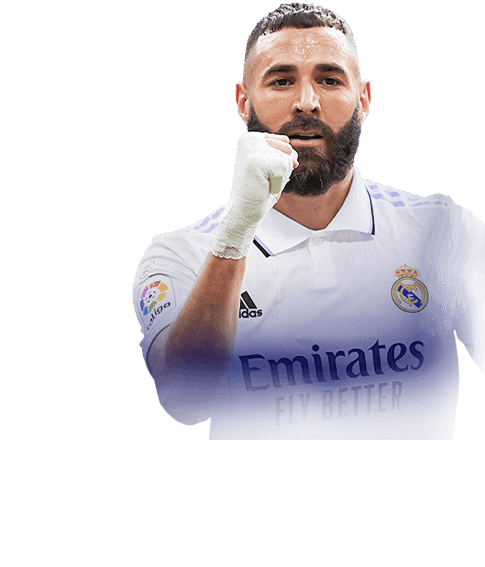 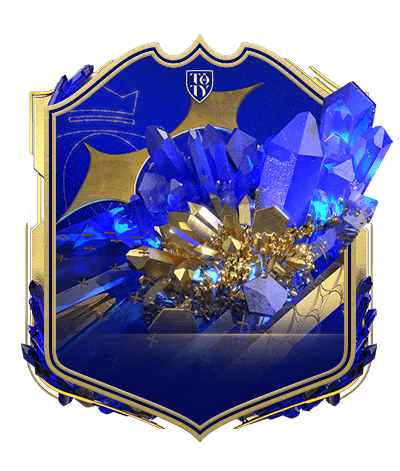 Karim Benzema Objectives
Glorious 15
Score in 15 separate matches using a French player in Squad Battles on min. Semi-Pro difficulty (or Rivals). Earn TOTY Benzema on a 3 game loan.
Comments
Reviews
0
/600
Click here to verify your account in order to comment Update my avatar House rules
Top Rated
New
Controversial
Show comments
Top Reviews
Only logged in users can submit a review
A review must be written in English
At least 200 characters are required.
Compare this player to other similar players you have used(optional).
If you import your club to FUTBIN or send us an image with the player data(fill the form below) your review will be marked as verified.
Include what you liked about the player in the pros area and what you disliked about the player in the cons area.
Your review will be manually checked during the next 24 hours.
Chem Style Used
Formations
Position
Rate Player Base Stats (1-10)
Pace
5
Shooting
5
Passing
5
Dribbling
5
Defending
5
Physicality
5
Most Used In:
Submit Review

What a year first off. Don't think there was one person not routing Benzema for the Ballon d'Or and as a result, received the most recognised individual reward in football.

Was lucky to pack this guy which was also my first ever TOTY so cheers ea. Thought people would want an insight to how he is for a 2mil card (currently) as I found previous TOTY cards like Lewandowski were disappointing.

Ran him at ST in a 4321 with stay central and a catalyst chem style which ill explain later why I've used this. Used him in my champs games where I got 17-3 where he scored 18 and assisted 14. Took him for a run in a couple of rivals where I'm floating around 600 points where he played 5, scored 3 and assisted 4.

At this point in FIFA, I'd say he is the best ST I've used. For comparison I've used WC Eusebio, Prime Cantona, TOTT Messi and IF Mbappe.

Whether this changes when better midfielders and defenders drop I'm not sure, however a couple games landed against Lucio (best cb imo) and he was leaking goals like no ones business.

The other part I like is how easy it is to link him. He's in a good league, from the best team with arguably the best nation in the game. Comparing him to other players I've used who have close coin value, I think 2mil is way too cheap for how good his is.

Pace- Controlled acceleRATE only with over 90 pace (99 with hunter/catalyst). Feels quick and doesn't get beat easily by defenders. Breaks the back line easy and his acceleration boosts when tapping RT (R2) have been affective.

Shooting- No need to speak about this really. All stats are almost 99 with 5* weak foot and the outside boot trait. Low driven shots have been class as well, I honestly cant fault it. Some players as we've all experienced will put a tap in wide for a laugh but nah not Karim.

Finesse shot trait has proved very useful with 90 curve on his base stat. Haven't felt the need to green time these either which is a bonus and again touching on the 5* WF, he can bend them in on either foot.

For any of my timed finishers, you will never get used to how unreal his green times are. To anyone using this card who doesn't used timed finishing, now is the time to learn how if you want the most out of a 2mil TOTY.

Passing- Very surprised by this stat. His short pass, long pass and LB+RB (L1+R1) OTT through balls are pinpoint. Again with the 5* weak foot he feels like a cheat code distributing the ball. Also, I felt a lot of opponents didn't expect me to be creating chances with him as they'll assume all of your shots will come from him directly.

Dribbling/Skills- Agility and balance has not been an issue at all. Not sure if it's his reactions affecting it but his LB (L1) dribbling, skills and left stick dribbling have been very clean. For his size I expected him to be slightly clunky but he feels sharp through all minutes of the game.

Physicality/Height- 6'1" with high stamina, high strength, holds play well and holds off defenders well also. He can score off crosses as I've found however I can't comment on corners due to the recent patch and have resulted to playing it short instead.

Thankfully I do not have any cons for him which I'd expect for a card like this. All I can say is buy him and enjoy him, there might not be another time we get to use a Ballon d'Or winning Benzema card and all I hope is you guys enjoy him as much as I am.

Well, I packed TOTY Benzema from one of those 80+ upgrades you can complete 100 times... a few hours after the release. Am I lucky? very lucky. I didn't expect to pack anything from those upgrades, but did want to get something from the 50 different packs I've saved for TOTY defenders, because I thought there was no chance for me to pack any attacker TOTY. I even skipped the animation an didn't see Benzema walking out lol. Obviously I've had to change my team to fit Benzy in, and thankfully I've had Rulebreaker Alaba and WC hero Morientes so this part wasn't a headache as usually.

I tried Benzema in a few Rivals games before heading into WL, and he was damn good pretty much as I expected. A lil bit of general info for you to know what's my player level in FIFA - I'm a Div 1/ Elite Div player, 11-13 wins in WL. Far from the best but also far from the worst. My favourite formation is 3-5-2 as it gives me the opportunity to have enough players in both attack and defense. You can check my team in the link I left here, but in-game it looked slightly different - CB: Maldini, VVD, Fabinho. CDM: Alaba, Yaya Toure. LM&RM: Antony, Trippier. CAM: Stoichkov. ST: Morientes and the main man Benzema. Benzema's instructions were False 9, Stay Central and basic defense support (Most of the time, in rare cases when I had to go all in he just was on forward runs and stay forward instructions). Morientes was making forward runs and playing as a target man, while stoichkov joined the attack from behind and playing as second striker. That was my gameplan throughout all the 20 WL games.

Now, I've collected a bit more detailed stats rather than just the general 'Goals + Assists'. Let me present you Karim's detailed stats from the 20 games played in his debut WL:

In the middle of the WL, I was on a 8-6 record, and It all looked like another week where I start well (6 straight wins) and end up with 11 wins. However this wasn’t the case. Benzema led my team to a very strong finish, winning the last 6 games. It was the first time I managed to complete 14 wins, after numerous failures in the past months it felt really really good.

Now, It’s time to talk about Benzema in general. He’s an end game striker, who’s got perfect shooting and passing. His vision and passing skills really impressed me. He completes those tricky passes which often you mean to do but most other players end up passing to a completely different player or in a completely different way and those attempts never reach the target. Benzema has this playmaker trait for a reason, he’s running the entire attack when needed while still being a top tier finisher. What isn't perfect and honestly feels lower than the stats say are his Pace and Physicality. He doesn’t run like a 99 paced player, more like a 94-95, he often gets caught by those meta CB as Maldini VVD and Lucio and they often body him without him being a challenge for them, although the stats say he’s got 95 strength. Anyway, he’s still better at those components than most other players in the game, especially if you use him the right way. What really makes him that deadly forward and puts him in the same category as R9 and Mbappe, it’s his reactions and positioning on the pitch. He’s always first on the ball no matter what, and always comes to the right areas when I’m looking to make a pass or cross.

To summarize my long review, I’ve got to say he’s definitely worth the price (2M at the moment, will drop to 1.5M in the following weeks probably). Considering that he’s the cheapest forward out of the TOP Meta tier, I highly recommend trying him out if you’ve got the budget. Benzema is an allrounder in the attack and definitely a big game changer. I’m really happy to have him on my team!

Not the most agile

Sometimes unable to challenge strong CB when bodying them 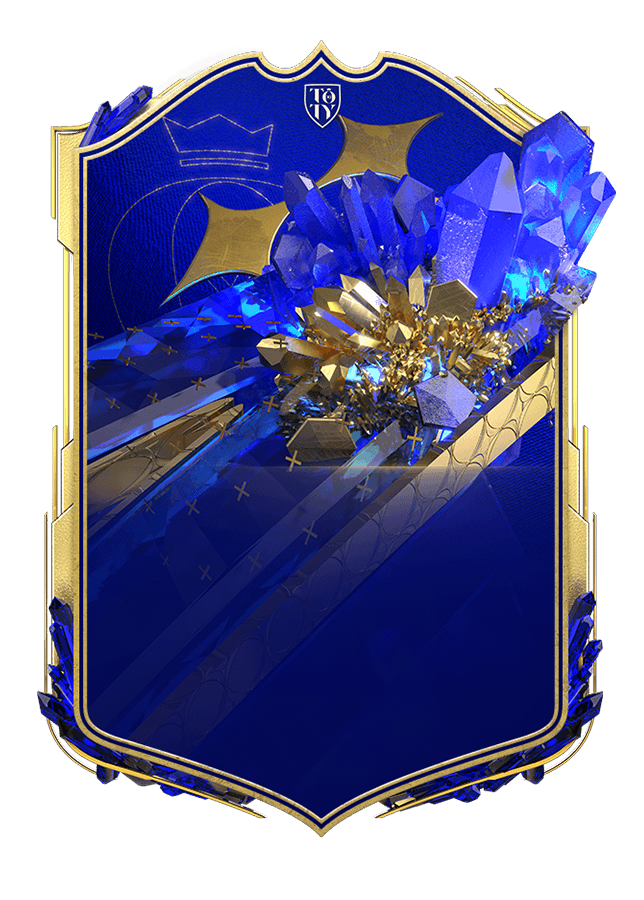