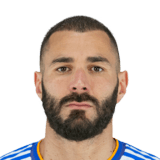 5.0
God himself
5 users liked this review

OMG! Packed him in a 82+ pack and was extremely disappointed with my pull. But i assembled a quick squad around him and gave Karim a chance.

My guy bangs in every ball that comes near him, and outpaces and destroys every defender trying to come near him.

His card is so well balanced with his passing, pace and shooting, and if you have a quick and agile striker next to him (I use Chiesa) he will become deadly.

His dribbling is not too bad either, but it is the only 'downside' i would say he has. But again, just use a quick striker next to him and it is no problem!

Well.. never thought I was going to like Benzema so much in FIFA. This guy is absolutely cracked and here is why:

I play on next gen, and currently between div 6 and div 5. I play him in a 4411 at CF with Haaland on top. What this guy does for me everytime is drop in the exact right position to collect the ball and create deadly chances. Either it is with his amazing linking play or have a go himself with a dribble and shot. His shot speaks for itself, everything goes in. In the box, outside the box with L2, it does not matter. His dribble and movement is really silky and reminds me of the IRL Benzema. With the new meta being lengthy, architect is the way to go. This will help him to get in behind and when he is up to speed there is no catching him. And he bodies defenders with his strength.

Is he better than Haaland? I say he is different. If you can afford both, partnering them is deadly.

But if you can't, Benzema feels amazing on the ball, which gives you the comfort to dribble past defenders and turn all the way you like in front of the goal to create space. This guy is a complete attacker and a gamechanger for your squad. Haaland is more brute strength, pace and forward runs. KB9 has the ability to send him away everytime with no problem. His passing is really good, even his long passing and through balls. I played Haaland next to Jota and there was not much variation in my attacks. Benzema changed this all

Makes you comfortable around the box to try everything

I do not like reviews who have no cons players, because a perfect player is impossible. But believe me if I say I have a hard time giving him any cons at the moment.. Maybe I would say I did not see any headers go in, but could be because of my playstyle with him. A lot on the ball and 1-2s with forwards.

So for my starter team I decided to give this Benzema card a go, since I really like him IRL and he finally has a pretty good base card which goes for a pretty reasonable price - I got him for 28k on sunday which was a steal, considering his price now (78k). I still feel like he should have gotten an even better card based on his last season but I can honestly say that this is by far the best base Benzema card I have tried in any FIFA.

My main concern of his was of course his pace but it's not a problem at all, when he goes on counters no one can catch up to him, so I'm definitely glad that EA finally fixed that non sense when defenders always caught up in an instance even to the quickest of strikers.

But his main quality is of course his finishing, he even scored some amazing volleys and bicycle kicks, when he comes in the penalty box, it's almost a guaranteed goal.

Very good passing for a striker

This Legend just hit the 200 games mark in my club and I'm about to put him to sleep for good, but I loved him for the time and this is why I'm now writing this review.

I packed him untradeable very early on and he played every match ever since, if you get him in position, he will get the job done no question, wether by foot or head, just as you'd expect from a card like this.

Biggest downside from my experience is the mobility of the guy, while he will slay it when he is in position, it got progressively harder to get him there as the opponents got quicker and stronger defenders, as i went up the leagues and the better defenders went down in price. Even when he was right in a space between the CBs, he often times ended up getting cought pretty easy.

A similiar issue is his dribbling and movement with the ball, he turns a little heavy in the box and you can lose possesion quite easy.

But I don't want to downplay his qualities, I'd assume if you were to pair him with a more agile and quicker striker he might still be quite the stud, as I really like the 4231 narrow I have to rely on a sole striker and he just doesn't fit the role anymore. Especially since he is not only a deadly finisher, but also an incredible wall player and assist provider, especially in the last 50 odd games he contributed almost as many assists as goals for my team, with architect Chem Style he can keep almost any CB at bay due to his crazy strength and provide the last pass(in part due to his natural passing stats and in part due to the chem style) to one of my CAMs.

All in all a great player and even though he just got dropped from my team, i can really recommend him for anyone looking for deadly striker.