Anything was going to look strong when compared with last week's side and with the likes of Lewandowski, Bruno Fernandes and Angel Di Maria all standing a chance for TOTW 7 there are plenty of strong options for potential red picks! As a side note, I am confident of a high score for this side. 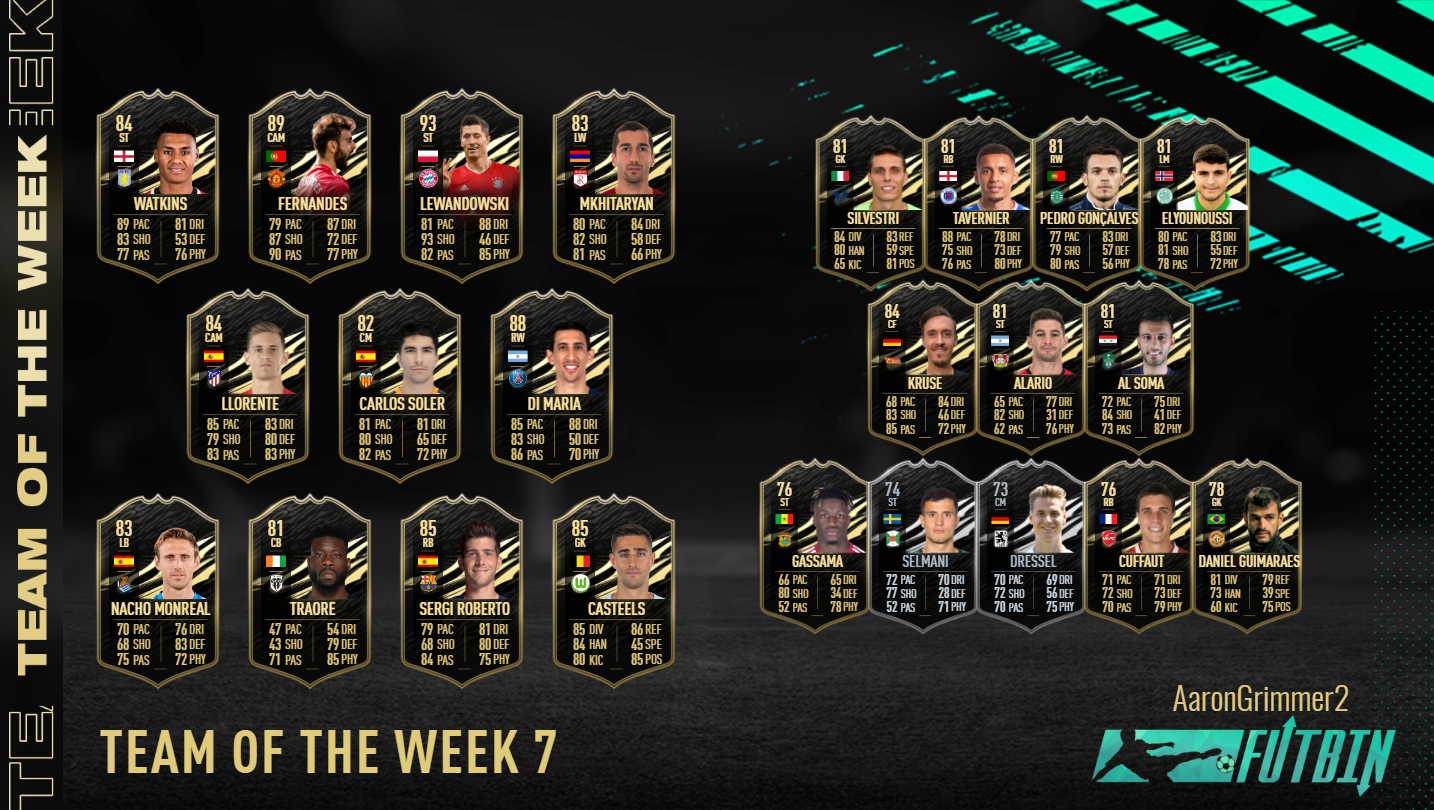 It looked as though it was going to be an easy win for Wolfsburg who lead Hoffenheim 2-0 and had a penalty in the 84th minute but it was anything but that. With Weghorst missing the penalty to make it 3-0 Hoffenheim went up the other end to score in the 87th minute. Hoffenheim then got a penalty of their own in the 94th minute to level the scoring but it was Casteels who came up strong, saving the penalty and securing Wolfsburg all three points. Kicker awarded him MOTM with a 1.5 which makes him highly likely for this side.

Although Barcelona conceded twice in their 5-2 win over Real Betis on Saturday, I can still see Roberto picking up an IF. That is after the defender chipped in with two assists. With him playing in a main division I doubt that two attacking returns will go unnoticed and thus expect him to feature in TOTW 7. Messi, as usual, was named MOTM but still not enough for his first IF in my eyes.

Traore has been on the fringe of my predictions a few times already this season and thus it’s about time that he got some recognition. The Angers defender has been solid all season. Offering both defensive and offensive contributions to the side. Angers won 5-1 this weekend with Traore chipping in with two assists.

Both keepers managed to save penalties during Sociedad’s 2-0 home win over Grenada but instead of opting for a keeper, I feel that Monreal will be the player getting recognized after he scored one of the two goals alongside being solid defensively. Konate is the other option here but with Bundesliga having so many options I had to cut somewhere so unfortunately, Konate misses out for me.

Hopefully, EA will opt to include Mkhitaryan as a CAM rather than a LW but I feel as though he will be classed as a LW. Regardless of his final position in the side, it is inevitable that he will make the side after the Armenian scored all three of Roma’s goals during a 3-1 away win over Genoa.

We have seen a fair few SIF snubs for what I can only imagine being EA classing it as too soon. This one is a real test for them though. Fernandes picked up his first IF back in week 1 and with this being week 7 I can’t see why they would deny him. The Portuguese midfielder scored twice and assisted another in United’s 3-1 home win over Everton. Should they decide to snub him though I would expect Maguire to be in his place.

I still feel that Felix’s inclusion last week was cheap and if they opted for other options such as Willian Jose or Morata we would have seen the Portuguese forward in this side after he bagged two goals and an assist. Instead, we opt for the second-best option in the match with Llorente. The Spaniard played a more advanced role this weekend and rewarded his boss with a goal and an assist.

A hat trick of penalties is usually a difficult decision when it comes to TOTW, with EA often opting to ignore them. In this specific situation, I can’t see that happening though with Soler’s coming against Real Madrid in an impressive 4-1 win for Valencia. Soler is the only realistic option from the match and thus I would expect him to make it.

Those who purchased the FB ADM will not be happy with this one but it looks highly likely that the Argentine will now feature in TOTW. With two goals and one assist to his name, he looks nailed on for week 7 despite recently featuring in a promo for EA. With him being out of packs I see no reason as to why he can’t make this side.

Aston Villa looks very hit and miss this season after hammering Liverpool 7-2 earlier in the season their results were not so impressive but then against Arsenal this weekend, recorded a comfortable 3-0 win. Watkins was heavily involved, scoring two of those three goals which with the lack of strikers available should result in his inclusion.

There is a slight risk involved in including Lewandowski in this side, simply due to a likely POTM item just around the corner but looking at the Munich v Dortmund game he really should be making the cut. The Polish striker was named MOTM for his goal and assist in the rivalry which saw Munich come away as 3-2 winner and had a late goal disallowed. Sane is probably the second-best option but honestly, he is a push.

I have not had much luck with the Serie A keepers in recent weeks with Silvestri himself being an incorrect prediction as well. I am going with the Verona stopper once again this week though after he made 7 saves in a 2-2 draw with Milan. Obviously conceding two is not ideal but if it wasn’t for Silvestri AC Milan would have run away with this result, as they were expected to do.

Rangers ran away with the result while hosting Hamilton this weekend, scoring eight without reply. There are IF suggestions left, right and center from the match but we opt for a player who is often snubbed, in Tavernier. The defender scored twice and assisted another in the romp. Considering he is a gold defender with three attacking contributions I find it hard to believe that he will miss out.

I have already predicted Goncalves this FIFA but he is yet to feature officially. Once again, the Sporting midfielder has a strong case for an inclusion after scoring twice and assisting another in a comfortable 4-0 win for the Portuguese outlet. With many other midfielders performing well too there is a chance he misses out but surely, he must be in one of these sides soon enough.

With several smaller leagues being snubbed of obvious candidates due to EA opting for another player from the same division it might be pushing it by suggesting that the Scottish division will receive two IF’s this week but both players heavily deserve their spot in the side. Elyounoussi gets the nod after scoring a hat trick in Celtic’s 4-1 win.

Union Berlin recorded an impressive 5-0 win over Arminia this weekend, a result which puts them up to 5th in the Bundesliga standings. Kicker awarded Kruse a perfect 1 match rating which will almost always see a player into TOTW and he received that for a goal and two assists in said win.

Alario was robbed of an IF last week with Hradecky being one of a few random Bundesliga inclusions last week from EA. The Leverkusen forward continued his good form this week with two goals in their seven-goal thriller against Gladbach. Kicker awarded Alario with a perfect 1 match rating making him a certainty for this side.

Al Soma is a regular with the FIFA community now, with the Syrian striker picking up regular IF’s over the past few years. His first of FIFA 21 looks to be coming on Wednesday after he bagged himself a hat trick in Al Ahli’s 4-3 away win this weekend.

It’s very rare that we will see a non-gold keeper included in TOTW with it only happening on a couple of occasions over the course of the game (excluding non-gold TOTW’s) When it does happen its usually for something extraordinary and that is what we have with Guimaraes. The Nacional keeper made numerous saves in their 2-1 home win but what makes this special is that he made two penalty saves to ensure his team claimed three points.

The reserve defenders have been exceedingly difficult to predict so far this year but Cuffaut managed something remarkable this weekend. The Valenciennes defender was heavily involved in their 5-4 away win over Toulouse. Scoring four, yes four, goals from the RB position. What makes this even better is that none were even penalties. You won’t see this again anytime soon.

From one crazy performance to another, Dressel also managed to score four goals this weekend. With the German playing a CDM role during Munich 1860’s 6-1 home win. EA will inevitably continue their lower German division trend, but you can’t really argue against it here.

Varbergs have been on dreadful form as of late but a 5-2 home win over Hammarby saw them record their first win in eight. The three points came largely thanks to their striker, Selmani, who managed to score three of those five goals.

Contrary to recent weeks there were not too many hat tricks to chose from this week and thus those who managed to score three should feature in EA’s side on Wednesday. Gassama scored three goals for Fuenlabrada during their 3-0 win over Alcoron