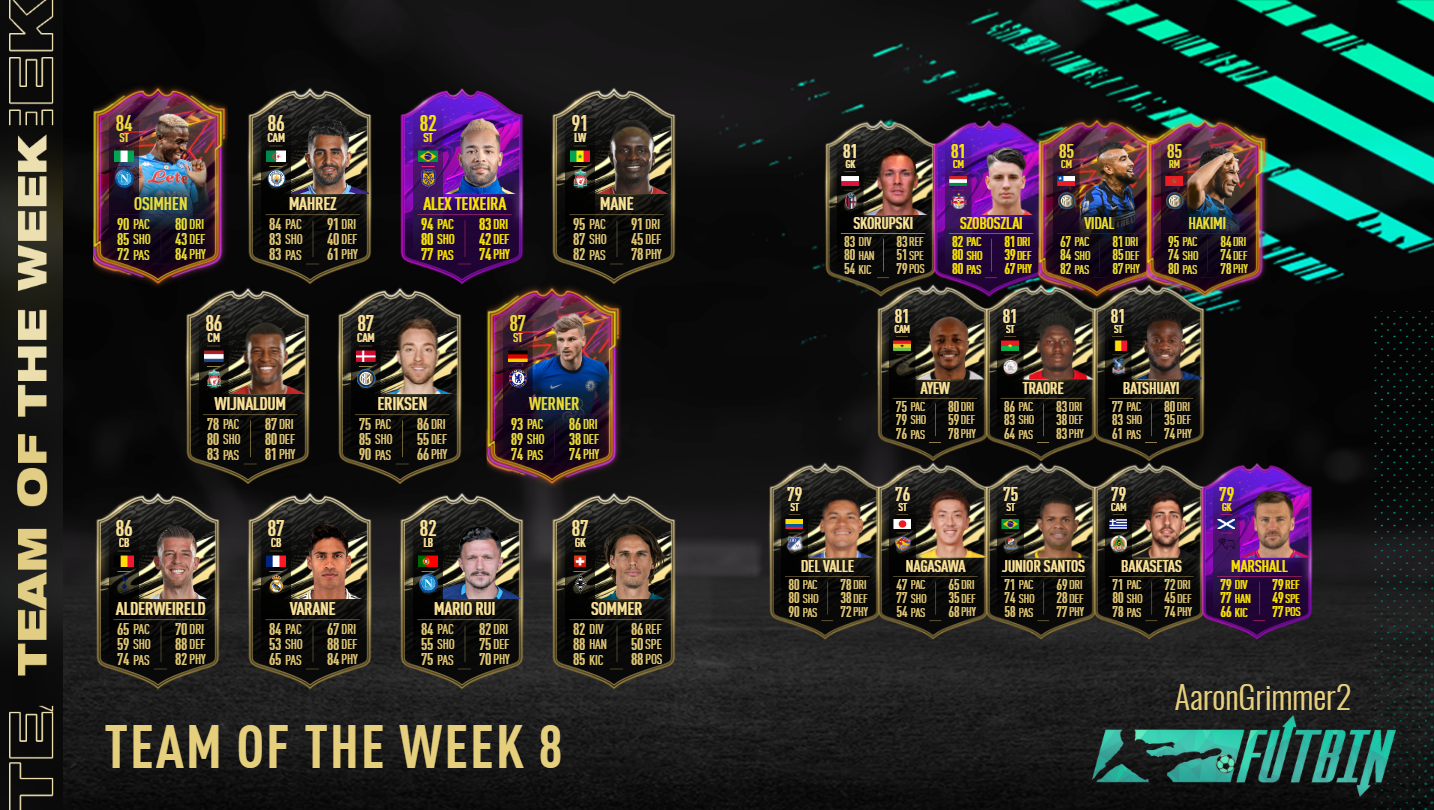 Although EA snubbed Guimaraes last week the same will not be happening with Sommer this time around. The Swiss keeper saved two Ramos penalties, the first the Spaniard has missed since May 2018. Sommer did concede a late Moreno goal but with the scores level at 1-1 there is no doubt surrounding Sommer’s inclusion despite the clean sheet not being intact.

Toby Alderweireld – CB - OVR 85>>86
The England fixture almost always results in an IF and with Belgium winning 2-0 it will certainly be going there way. As for who is a difficult call but with a lack of clear defensive options I am taking the punt on Alderweireld, who although failed to pick up MOTM did receive an 8/10 from Sky which could well be enough for his inclusion.

Raphael Varane – CB - OVR 86>>87
The majority of people will be going the Kante route with this one after the Frenchman scored the only goal of the game in France’s 1-0 win over Portugal but with so many high rated midfielders already there’s one or two that simply have to miss out. For that reason, I have instead opted for Varane. Both Kante and Varane picked up 8’s from L’equipe and EA will be desperate for defenders.

Mario Rui – LB - OVR 79>>82
Over to Portugal now and although they lost their competitive fixture to France, during their friendly match with Andorra they managed a convincing 7-0 win. Paulinho scored twice and thus is a good option but instead I am opting for Mario Rui, who managed two assists from the back.

Timo Werner – LW - OVR 85>>87
The first of many OTW cards to make this prediction is Werner, although his first IF came just four weeks ago I think that the gap is just enough for another upgrade, especially with SIF already occurring. Werner scored twice in Germany’s 3-1 win over Ukraine with the other option being Goretzka for two assists. Werner should be the one to make the cut though.

Christian Eriksen – CAM - OVR 85>>87
Another International week, another Eriksen IF. The Danish midfielder scored both their goals during a closely battled 2-1 victory over Iceland. Although one was from the spot I don’t think that it will harm his chances of gaining his routine spot in these sides.

Georginio Wijnaldum – CM - OVR 85>>86
Wijnaldum is inevitably going to be more of the expensive cards this week after his brace in the Netherlands 3-1 win over Bosnia is likely to secure his place in TOTW 8. Dumfries did record two assists though and with a lack of defenders being available there is a chance that Wijnaldum is snubbed for him, it’s a very slim one though.

Riyad Mahrez – CAM - OVR 85>>86
Algeria were tipped to walk their group and it looks as though that’s exactly what’s going to happen with a 3-1 win over Zimbabwe making it three from three for them. Mahrez scored one and assisted another in said win which during an international week should be enough to see him in.

Sadio Mane – LW - OVR 90>>91
Mane was vital in both matches he played this week scoring one and assisting another during Senegal’s midweek win and then he ended up scoring the only goal of the match in their 1-0 win over Guinea Bissau to make it four wins from four for Senegal. With the midfielder spots being highly competitive there is a chance that Mane misses out, but I would expect him to be their headline player this week.

Victor Osimhen – ST - OVR 79>>84
Yet another potential OTW upgrade and it’s a big one considering that not so long ago Osimhen was one of the worst ones and now he could be on for hissecond upgrade and a very usable item. This time he scored once and assisted another two for Nigeria in a 4-4 draw. They did however lead 4-0 before somehow throwing the match away. I still feel that with the lack of strikers that Osimhen has done enough though.

Alex Teixeira – ST - OVR 79>>82
There are likely to be quite a few hero items in this weeks TOTW with several Euro play off matches taking place and the final of the Chinese Super League. For the latter either Eder or Teixeira are likely to get the nod but with Teixeria being the more attractive option alongside the Brazilian scoring what turned out to be the winner in their 2-1 win I would expect it to go his way.

Lukasz Skorupski – GK - OVR 76>>81
The gold keepers are always difficult to predict during International weeks but as far as they go this was one of the easier ones with Sommer being nailed on and Skorupski being a decent option. Although Ukraine’s penalty hit the post rather than being saved by Skorupski the Polish stopper still did his fair share, making a total of six saves to keep his clean sheet in their 2-0 win over Ukraine.

Arturo Vidal – CDM - OVR 83>>85
OTW Vidal owners will be happy after his price doubled this week and theres good reason for that. The Chilian midfielder is practically confirmed for TOTW 8 after scoring both their goals in a 2-0 win over Peru, with the first being something special too! The first of hopefully many IF’s for the Inter man.

Dominik Szoboszlai – CM - OVR 75>>81
Hungary qualified for the Euro’s in dramatic fashion coming from behind against Iceland to win 2-1 late on with 88th and 92nd minute goals. Szoboszlai scored the second of those two goals which should result in a hero item for the Salzburg man. Literally the definition of why these cards were made a thing.

Achraf Hakimi – RM - OVR 83>>85
Obviously Ziyech was the standout player in Morocco’s 4-1 home win this weekend but with him featuring in TOTW 6 I feel that another upgrade is unlikely at this moment in time. Instead we opt for another OTW item in Hakimi. The Inter midfielder scored one and assisted another which alongside the Ziyech snub should be enough for his first upgrade.

Andre Ayew – CAM - OVR 76>>81
Ghana made it three wins from three in their AFCON qualifying match with a 2-0 win at home to Sudan. Ayew scored both of those goals and with him being a gold item I find it hard to see him missing out.

Lassina Traore – ST - OVR 68>>81
With Troare’s first IF coming just three weeks ago in TOTW 5 there is a lot of doubt surrounding this inclusion but with strikers being few and far between and Traore not exactly being a meta player I can see EA opting for the SIF route. Traore scored twice for Burkina Faso in their 3-1 win over Malawi. He also missed a penalty which will also harm his chances.

Michy Batshuayi – ST - OVR 78>>81
Batshuayi has always done a job on International weeks for Belgium but has struggled for game time while playing Premier League football. Strangely enough that struggle has continued despite making the move to Crystal Palace. The Belgian helped turn the game around as they hosted Denmark, scoring both goals in a 2-1 win.

David Marshall – GK - OVR 72>>79
The final hero item predicted for this side is Marshall, although I wouldn’t be surprised to see a Pandev or someone from Slovakia additionally. As for Marshall he helped Scotland through to their first major competition since 1998 , making three saves in normal time before saving the only missed penalty in the shootout.

Anastasios Bakasetas– CAM - OVR 72>>79
Usually the reserve section is packed with players which have three plus goal contributions but with it being the international week that simply is not possible so instead players like Bakasetas, who deserve to be in, would end up being snubbed. The Greek midfielder scored both their goals in a 2-0 win over Moldova.

Junior Santos – ST - OVR 66>>75
The first of two J-League strikers making the cut for me this week is Junior Santos whose 92nd minute goal secured his hat trick during a 6-1 win and in turn will likely result in an IF for the Brazilian.

Shun Nagasawa – ST - OVR 67>>76
As far as IF’s go Nagasawa is likely to be one of the worst gold ones this year. Nevertheless, the Japanese striker is inevitable going to get one after his hat trick helped bottom placed Vegalta beat 2nd placed Osaka 4-0.

Ayron Del Valle – ST - OVR 72>>79
It is still unsure how these cards will work when to comes to gaining IF’s with them yet to receive an IF option. We will find out on Sunday with Del Valle after he scored a hat trick in Millonarios’s 6-1 home win. I would expect that they will work the same as normal IF’s but I am unsure.