In terms of predicting it was an extremely difficult week with numerous 50/50 decisions going alongside a clear shortage of options. It looks to be a big week though with multiple usable options such as Cancelo, Delaney a striker Salah and possibly another upgrade for those SBC Milinkovic-Savic owners! 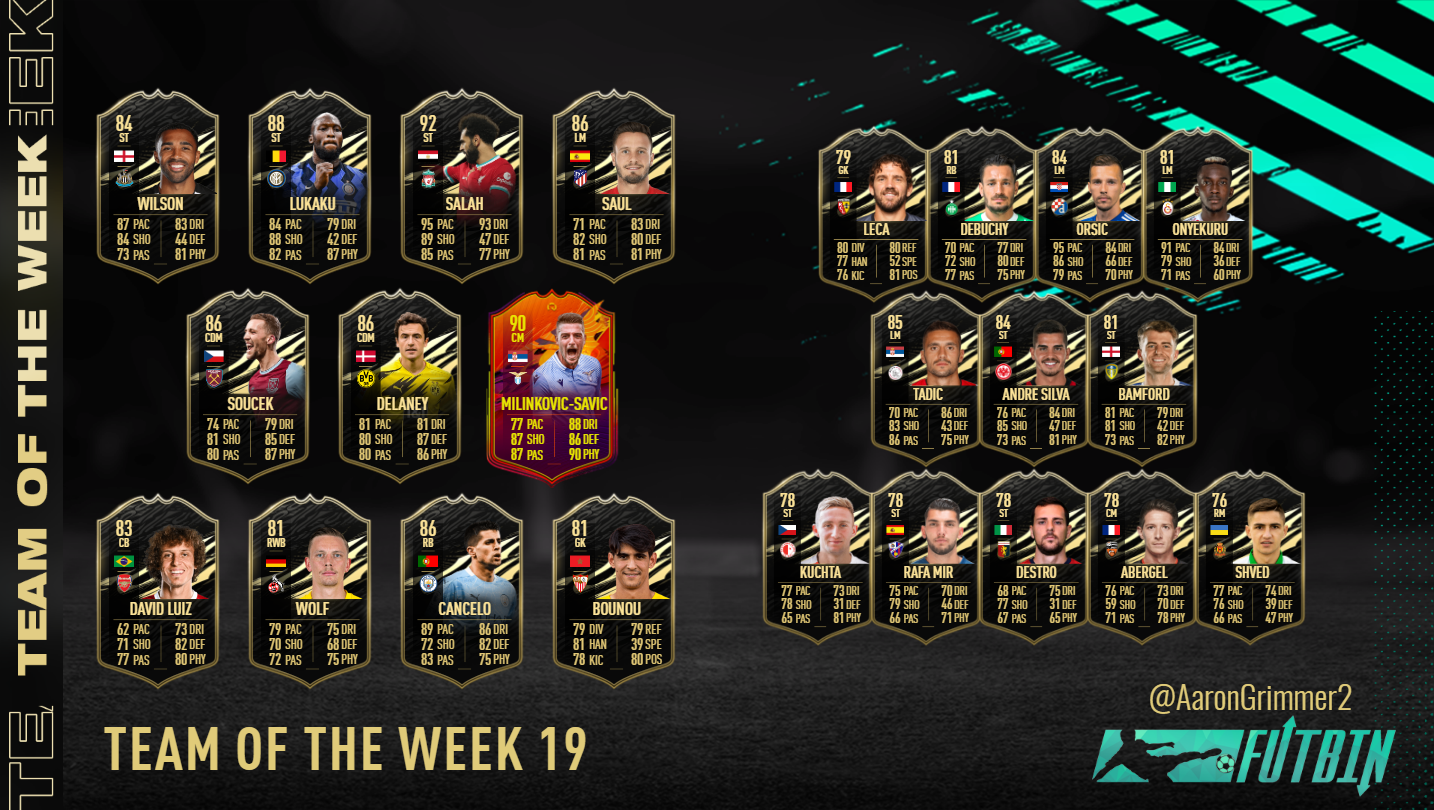 Jean Louis Leca – GK - OVR 73>>79
I seriously struggled with goalkeeper selections this week and as a result I wouldn’t be overly surprised to see EA use Leca as one of the two usually gold keeper positions. That being said even as a silver spot I can see the Lens keeper making it after he made a total of eight saves in Lens’s 2-1 win over Montpellier from which he was awarded an 8/10 from L’equipe.

Joao Cancelo – RB - OVR 83>>86
There are two very strong TOTW options from City’s 5-0 win over WBA with both Gundogan who scored twice alongside Cancelo who scored one and assisted another. I feel as though there is always a preference towards defenders in these situations and with the Portuguese man also claiming MOTM I feel that the IF goes his way.

David Luiz – CB - OVR 80>>83
Manchester United v Arsenal was a hyped-up match for this week’s schedule but as is often the case it disappointed in the form of a 0-0 draw. David Luiz impressed though with the Brazilian putting in a strong defensive display. He went on to be named MOTM which in such a game should be enough for him to sneak in under the circumstances.

Marius Wolf – RWB - OVR 76>>81
Its always difficult to classify between RWB and RM in the modern game but the line ups clearly show a difference between the wingbacks and the midfielders for Koln’s match with Arminia. Regardless of where EA decide that Wolf played, he should still make TOTW 19. That is after he scored twice to claim a 1.5 match rating during their 3-1 win.

Saul – LM - OVR 84>>86
I really struggled to fill the side this week and thus we have selections such as Saul, who I would never really go for in other weeks. The Atletico Madrid man scored one of their four goals in a 4-2 win over Cadiz. Negredo claimed MOTM but coming from the losing side he won’t make the side and Saul looks to be the best option from Madrid.

Tomas Soucek – CDM - OVR 81>>86
West Ham continue to thrive under the current Moyes system in place with Soucek playing a somewhat Fellaini role in Moyes’s side. It’s working well for both player and club with the Czech international continuing to excel for the Hammers. He found himself netting twice during a 3-2 win over Palace this week and although there is just a four-week gap from his previous IF we saw the same amount of time being Koopmeiners items recently.

Sergej Milinkovic-Savic – CM - OVR 85>>88
This one could be argued a bit over the top considering it would be his third IF however, with Savic recording the second highest rating in Serie A this week for a 7.5 it could easily happen. He didn’t directly score nor assist but his overall game for Lazio was fantastic during a 3-1 win over Atlanta this weekend. So, if you completed the SBC for his headliner item you could be in for a nice surprise, or if like me you didn’t you will now be kicking yourself as he looks set to go up to 90 rated now.

Thomas Delaney – CDM - OVR 81>>86
Although Delaney won’t be classed as a CB again it is still going to be a very strong card at CDM. He gets the nod from myself for scoring one of Dortmund’s three goals in their 3-1 home win over Augsburg. Kicker went on to award him MOTM with a 1.5. A rating which puts him among the best of the week.

Mohamed Salah – ST - OVR 90>>92
With a lot of Liverpool’s players featuring in the TOTY promo it’s difficult to award them anything from the first of their two fixtures with both TAA and Mane being unavailable. Thankfully, the decision was then made easy with a 3-1 win over West Ham seeing two goals from Salah. He was then awarded a 9/10 match rating which will see him make the side with ease and while playing a ST role it offers something different to his UCL item.

Romelu Lukaku – ST - OVR 85>>88
Gazzetta were very stingy with their ratings this week with Lukaku only receiving a 7/10 for his two goals this weekend. Usually that would result in a snub from myself but with nobody in the division standing out two goals becomes very difficult to ignore, especially from a big-name player. The Belgian came off the bench at 1-0 to then help Inter secure a comfortable 4-0 victory over Benevento.

Callum Wilson – ST - OVR 78>>84
Although you can debate Wilson’s position this week with some claiming RW from the line ups they all state ST and I believe that is what EA will end up going with. Either way I would expect that Wilson will make the side after he scored twice to help Newcastle to a 2-0 win over Everton on Saturday.

Yassine Bounou – GK - OVR 76>>81
With both goalkeepers and La Liga options being slim pickings this week, it made sense to kill two birds with one stone and select Bounou who will fill both Quota’s. The Sevilla keeper made a total of six saves to keep his clean sheet during a 2-0 away win over Eibar.

Mathieu Debuchy – RB - OVR 78>>81
The French League was another very limited on options this week, so much so that I could have easily ignored it altogether. There will inevitably be a couple though and thus I have taken the punt on Debuchy. He was named MOTM with a 7/10 on L’equipe and we all know how often EA opt for those players.

Henry Onyekuru – LM - OVR 77>>81
It was the complete opposite of last week from which there were too many midfield options and this week we instead barely have any. A lot of the time players coming off the bench are negatively impacted in the selection process but with two goals to his name in Galatasaray’s 2-1 win I just can’t ignore Onyekuru for this side.

Miroslav Orsic – LM - OVR 76>>84
Orsic has a high reputation in the FIFA community after last season’s items from the Croatian and although he is probably never going to replicate that going forward, he could be on the way to a very respectable 84 rated card on Wednesday. That is after he scored twice to help Zagreb to a 3-1 win over Hadjuk, allowing them to remain in first position in the title race.

Dusan Tadic – LM - OVR 83>>85
The Eredivisie has been treated in recent weeks with numerous players from the division making EA’s side but there were not really any clear-cut players this time around. I do feel that the division will be noticed though and thus Tadic is my selection from his midweek goal and assist during Ajax’s 3-1 win over Willem.

Andre Silva – ST - OVR 79>>84
Andre Silva has seriously impressed this season so far, scoring another two goals for Frankfurt this weekend as he takes his personal tally up to 16 from just 18 matches. Both Silva and Hinteregger received a 2-match rating but Silva is the more likely of the two to make the cut.

Patrick Bamford – ST - OVR 71>>81
Leeds was expected to impress this season and impress they have. Their latest three points came via a shock 3-1 away win over high-flying Leicester City. Bamford was involved in all three of those goals with one for himself going alongside two assists. Helped by the fact Bamford already has an IF, the second now looks to be on the way

Maryan Shved – RM - OVR 67>>76
Belgium has always been a difficult division to predict with limited sources available alongside the fact that EA are very inconsistent with the division. They do have a strong contender this week, however. Shved scored twice and assisted another for Mechelen as they battled their way to a 3-2 away win over Waasland.

Mattia Destro – ST - OVR 71>>78
There were a fair few options I could have played for this position and it can go numerous ways but with Destro being awarded player of the week in Italy I found it difficult to ignore him. The Italian scored twice for Genoa as they recorded a 3-0 away win over Crotone from which he picked up an 8/10 from Gazzetta.

Laurent Abergel – CM - OVR 70>>78
Lorient shocked Ligue 1 this weekend with a brilliant encounter with Champions, PSG. A game which they managed to win 3-2. Abergel was named MOTM after scoring once and assisting another and although he is only silver, I still expect him to feature in the promo whether it’s directly in TOTW or as a silver star, only time will tell.

Rafa Mir – ST - OVR 70>>78
There were a fair few hat tricks this week, but Mir is the one which stands the most chance simply due to the division. The Spaniard scored all three of Huesca’s goals in their 3-1 away win over Valladolid to record just their second win of the season.

Jan Kuchta – ST - OVR 70>>78
Slavia Prague continued their domination in the Czech league with a 6-2 win away at Zlin from which Kuchta stood out, scoring three of his own alongside an assist. Can Slavia go the whole season unbeaten time will tell but it’s looking good for them.