TOTW 23 could well be one to remember with multiple world-class players in contention! With Messi, Mbappe and an upgrade to headliner Goretzka potentially on the way, what more could you ask for? 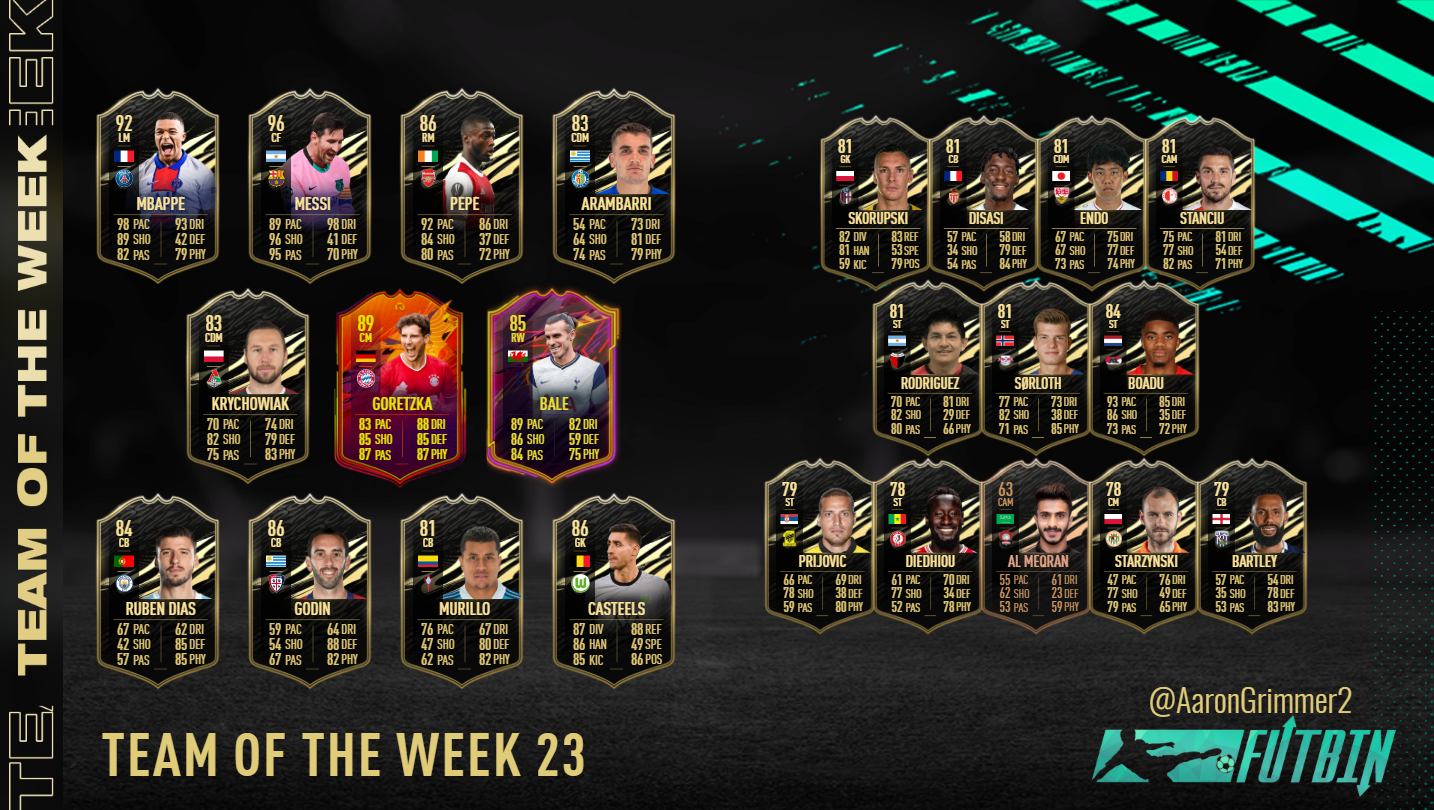 Koen Casteels – GK - OVR 83>>86
Although Casteels was not named as keeper of the week in Germany I still feel after he was named MOTM with a 1.5 match rating, I can still see him making EA's side on Wednesday. Despite only making two saves his impact was enough to be noted by Kicker and usually, we go off of the ratings so his inclusion would not be a surprise.

Ruben Dias – CB - OVR 81>>84
Once again future star additions missed out last week and once again, they are in contention for TOTW. For the second consecutive week, I am taking the punt on Dias after he scored one of City’s two goals and claimed MOTM in their 2-1 win over West Ham. Dias has got to be among the best signings if not the best signing of the summer!

Diego Godin – CB - OVR 85>>86
It really wasn’t that long ago that people were claiming that Godin was one of the best CB’s in the world. Now playing his trade for Cagliari he has gone largely under the radar although to be fair he is now 35 years of age. Anyway, the Uruguayan now looks set to receive his first IF for the club after being heavily involved in keeping their clean sheet during a 2-0 away win over Crotone. Making four tackles and producing a clearance of the line Godin was named MOTM with a 7.5 from Gazzetta.

Jeison Murillo – CB - OVR 77>>81
On another week I could have easily ignored La Liga completely, but we know that EA won’t do that and thus I have to make a couple of difficult decisions in order to get the division involved. One of those is Murillo who scored Celta Vigo’s only goal in their 1-1 draw with Valladolid. Quite a good cheap IF should he make the final cut.

Nicolas Pepe – RM - OVR 82>>86
Arsenals form continues to be patchy with some very good results and also some shockers. Thankfully for them, a good performance occurred against a Leicester side which is coming off a disappointing result in Europe. The hangover was present with the Gunners coming away with a 3-1 away win. Pepe was named MOTM and although he only scored the one, I can see it being enough for him to be included this week.

Kylian Mbappe – LM - OVR 90>>92
It was a quiet week in Ligue 1, with lots of low scoring matches, many of which ended up in a draw. Due to that PSG’s 4-0 win is very likely to feature and with Mbappe claiming MOTM with his 8/10 for two goals and the fact he was named POTW suggests that he is a certainty for this week’s side. Especially considering that this would be his first IF of FIFA 21 so far.

Grzegorz Krychowiak – CDM - OVR 80>>83
Its very rare that we see an IF from the Russian league after licensing issue hit the division a few seasons back but the once loved league in FIFA is now all but forgotten. But, with Lokomotiv facing CSKA this weekend, we could see inclusion in TOTW 23. Two players stood out with Guilherme making six saves to keep his clean sheet, but I am instead opting for Krychowiak, who scored one of their two goals in a 2-0 win.

Mauro Arambarri – CM - OVR 80>>83
Getafe recorded a very impressive 3-0 win over Valencia this weekend. Arambarri opened the scoring for the hosts and went on to receive MOTM for doing so. With options being few and far between I feel that considering the result this could be enough to see the Getafe midfielder sneak his way into TOTW 23.

Leon Goretzka – CDM - OVR 84>>87
Germany offered the most IF options this week by quite some margin, with multiple top-quality matches providing numerous goals. One of these matches was Munich v Koln from which the hosts ran away as 5-1 victors. Goretzka assisted three of those five goals and with a headliner item to his name, I can’t see the IF going anywhere other than his way.

Gareth Bale – RM - OVR 83>>85
It has been a while since Tottenham has been at their best but a convincing 4-0 home win over Burnley on Sunday could be exactly what was needed to kickstart their season again. Kane, Son and Bale were all heavily involved but it will inevitably be the Welshman who will be picking up the IF after scoring twice and assisting another, giving those OTW owners something to cheer about.

Lionel Messi – ST - OVR 93>>96
After the random inclusion of Ronaldo last week, I am happy to take the punt on Messi being in this time around. As already mentioned, La Liga had very few options and that should work in Messi’s favor. Barcelona played twice this week and the Argentine was named MOTM in both, firstly for a brace against Elche in a 3-0 win before then scoring once and assisting another in a 2-0 win over Sevilla. So, with three goals and one assist over two games, it wouldn’t be the worst time for EA to include him

Lukasz Skorupski – GK - OVR 76>>81
Bologna recorded a shock 2-0 win over Lazio this weekend with the latter seemingly struggling with a European hangover. That being said if it wasn’t for the heroics of Skorupski we could have been looking at a completely different scoreline. The Polish stopper made a total of eight saves which includes a penalty to keep his sides clean sheet. Gazzetta then awarded him MOTM with an 8/10, making him a very easy choice for this side.

Axel Disasi – CB - OVR 75>>81
This was actually one of the harder sides I have had to make and thus relying on EA’s consistency on L’equipe defenders seriously helped me to fill this position. Disasi was the only one to pick up a 7/10 this week of which he received for helped Monaco keep a clean sheet in their 2-0 win over Brest.

Wataru Endo – CDM - OVR 75>>81
Schalke could well be one for one of the worst point totals in decades with Stuttgart beating them 5-1 this weekend leaving them on just nine points so far this season. Endo excelled in the Stuttgart win, scoring two and assisting another two from the CDM position. There were a lot of high scoring matches in the division this weekend which resulted in a lot of options but Endo’s was among the best.

Nicolae Stanciu – CAM - OVR 77>>81
After surprising Leicester in the Europa League on Thursday, Slavia Prague had to fight for their win this weekend, battling their way to a 3-2 win over Slovacko despite falling behind twice in the match. Stanciu scored two of those three goals allowing the Czech outlet to remain undefeated so far this season.

Luis Miguel Rodriguez - ST - OVR 75>>81
This was a difficult position to fill with Castro being the other I debated. With one goal and two assists, I feel that the edge is with the Argentine though.  Colon went on to win the match 3-0 leaving them top of the table after the opening three games.

Alexander Sorloth – ST- OVR 77>>81
There were not many striker options this week and thus Sorloth stands a good chance after being named MOTM for both a goal and an assist in Leipzig's narrow 3-2 win over Gladbach. Sorloth picked up a 1.5 from Kicker resulting in his inclusion in their TOTW. With him being from the top 5 leagues I feel this gives him the advantage, even over others with two goals to their name

Myron Boadu – ST - OVR 75>>84
I almost predicted Boadu for his SIF last week for his brace but he narrowly missed out. This week is a completely different story though with the Dutchman scoring three. What’s more, is they come during an impressive 4-2 win over Feyenoord.  The Dutch league continues to offer usable players and with the addition of Sensei in the latest bunch of seasonal players there looks to be a complete usable side now

Kyle Bartley – CB - OVR 72>>79
Usually, I wouldn’t go near a non-gold CB with just one goal but with a lack of suggestions coming my way and the fact it’s from the Premier League I can see an exception being made for this one. Bartley scored the only goal of the game as WBA picked up a well needed three points via a 1-0 win over Brighton. A game which Brighton will be fuming about after missing not one but two penalties, both of which hit the woodwork.

Filip Starzynski – CM - OVR 70>>78
The reserves section is a highly competitive one this week with very few hat tricks being scored it leaves it wide open for players who would usually be snubbed now having a chance of making the final side. Starzynski is one of those players after he scored twice and assisted another in the Polish division this weekend. His contributions allowed Zaglebie to pick up their first domestic win in six matches.

Abdullah Al Meqran – CAM - OVR 53>>63
We could be about to see a rare bronze IF on Wednesday after Al Meqran managed to score a hat trick in Al Raed’s 4-0 home win over Al Ain. I actually almost missed this one due to his name being quite different from that listed elsewhere so hopefully, EA will also notice as if so, he is an easy selection for this side.

Famara Diedhiou – ST- OVR 84>>86
Despite Diedhious inclusion being from a midweek fixture, I feel with him coming from the English leagues that he has the advantage over others with two goals and one assist due to the lack of clear Premier League options. The A-League also has a few options but I feel that they are less likely to be included

Aleksandar Prijovic – ST - OVR 72>>79
The Saudi division was once again full of goals with two hat tricks being scored in the league, one of which is Prijovic. Despite missing a penalty, the Serbian found the net three times during Al-Ittihad’s 4-1 win over Al Qadisiya and is thus likely to still be included