There is no guarantee that EA will produce a TOTGS side but with the inclusion of path to glory cards there is at least a chance that it will occur. Here is a look at what we could expect should EA release a side and it is what you would expect with several big names such as Ronaldo, Lukaku, De Bruyne and Sterling all impressing during the group stage. Who do you think will go on to win the tournament? 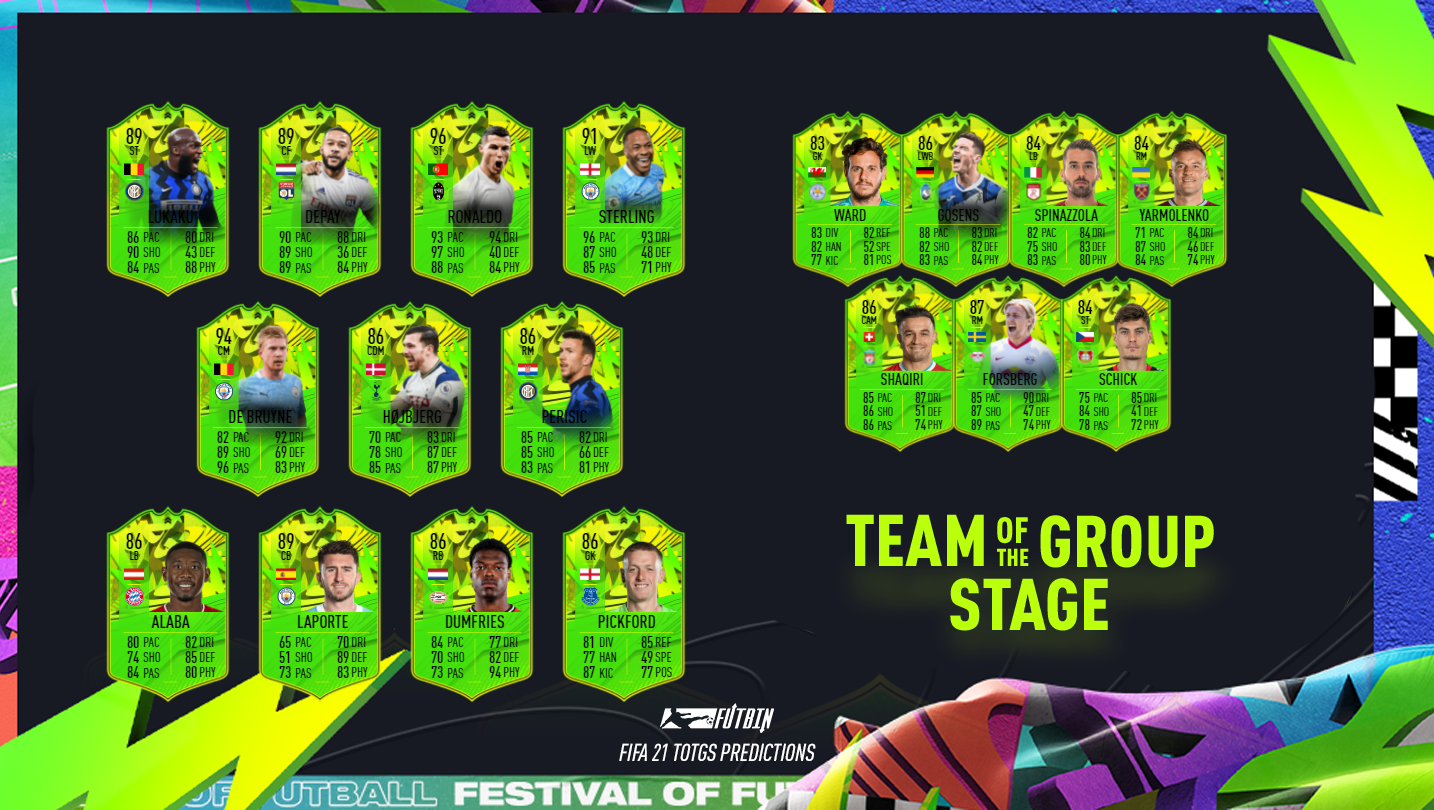 Jordan Pickford – GK - OVR 81>>86
The goalkeepers were not easy to select for this but with a couple of teams not conceding I felt it had to go to one of them. Donnarumma made literally no saves and thus I ruled him out and instead opted for England’s Jordan Pickford. Although he made only a handful of saves over the three games there was a couple of occasions in which he came out strong with a huge save against both Scotland and the Czech Republic which without we would not have progressed in first position.

David Alaba – LB - OVR 85>>86
Austria progressed via second place in a difficult Group C with six points from a potential nine. Alaba impressed throughout with his versatility being clear to see with three different positions played. It does make his position difficult to select but with two of his three coming in defence I do expect him to be classified as a defender. From his three matches, he provided two assists and kept one clean sheet. With Alaba perhaps being more attractive as a LB due to his CB TOTS I would expect EA to opt for the left side.

Aymeric Laporte – CB - OVR 87>>89
Spain looked very lackluster in their opening two matches managing just one point and creating very little going forward. That changed in the final and most important fixture against Slovakia though with the Spaniards running away as 5-0 winners. There were lots of individual performances in that specific match but with Spain’s defence looking so strong throughout I expect Laporte to be the man to get the nod. A huge loss for France despite the defensive talent they obtain.

Denzel Dumfries – RB - OVR 79>>86
Only a handful of sides managed to win their opening two fixtures with Netherlands being one of them. You could argue that they are among the easiest routes into the knockout stages though. One player that seriously impressed however was Dumfries, scoring in both his matches against Ukraine and Austria from which he was awarded MOTM for both. The dutchman went on to cap off a superb set of games with an assist during a 3-0 win over North Macedonia

Raheem Sterling – LM - OVR 88>>91
England has perhaps been one of the most boring sides to watch this tournament with just two goals from their three group fixtures occurring, with two 1-0 wins and a 0-0 draw. Sterling has been the man to score both the England goals and although I still don’t believe that Raheem should be starting simply on the two goals alone he would be likely to make this side.

Pierre Emile Højbjerg– CM - OVR 80>>86
Despite losing their first two fixtures with narrow defeats to both Finland (1-0) and Belgium (2-1) Denmark still managed to scrape through in second position thanks to a 4-1 win over Russia in the final matchday. There are a few contenders for Denmark despite only picking up three points, but none are better shouts than Hojberg who picked up the assist against Belgium alongside providing another two against Russia. He has been the catalyst in the middle of the park providing defensive cover alongside helping progress the attacks.

Kevin De Bruyne – CM - OVR 91>>94
There were a few names that everyone was keeping their eyes on this tournament and as is often the case De Bruyne was among them. A few have failed to deliver thus far with both Mbappe and Kane in particular struggling to get off the mark, but De Bruyne has impressed. Scoring once and assisting another two the creative midfielder has been pulling the strings for Belgium which in turn has allowed Lukaku to excel. Belgium is definitely a side to watch out for after winning all three of their group stage matches.

Ivan Perisic – RM - OVR 82>>86
Croatia was in trouble entering their final fixture of the group against Scotland, earning just one point from their opening two. They still managed to progress in second position on goal difference though thanks to a 3-1 win over the Scots. Modric impressed in that specific game but over the course of the three, it is difficult to argue against Perisic of whom has two goals and one assist from RM.

Romelu Lukaku – ST - OVR 85>>89
Belgium as expected has impressed from their opening fixtures in the group stage, winning both their opening games despite a slight scare against Denmark. Lukaku was heavily involved in both, claiming MOTM for his two goals in the first fixture before then being awarded MOTM again for his overall performance.

Cristiano Ronaldo – ST - OVR 92>>96
It was never really in doubt that Ronaldo was going to break the all time goalscoring record for the European championships this tournament and his three goals during Euro 2020 so far have propelled him into a respectable lead, now having scored 14 in the competition to date. Portugal has obviously got a very tough group so the fact he has still performed to this level to manage five goals and an assist shows just how important he is to the nation. He is now also level with the all-time international scoring record which Ali Daei holds with 109.

Memphis Depay – ST - OVR 85>>89
Although Depay was not awarded MOTM in any of the three games he played in the Dutchman was still a part of all three victories and with the Netherlands winning three from three you would expect at least a couple to be included. With two goals and two assists from those three fixtures, it is clear to see that the Barcelona bound forward has been on top of his game.

Danny Ward – GK - OVR 74>>83
Although this is perhaps harsh on Hradecky of whom had a superb European Championship I just feel that you should have progressed to feature in this sort of side and thus I have opted for Danny Ward instead. The Welshman was crucial between the sticks in their route for progression, making 13 saves over the three games while only conceding twice. Not many expected Wales to progress this year in what was a difficult group so congratulations to them.

Robin Gosens – LWB - OVR 82>>86
Gosens has impressed for Atalanta the past couple of seasons, so it doesn’t come as a surprise that he secured the left side for Germany but his performances there have been remarkable. Especially against Portugal from which he managed to score once and assist another two. That performance alone should be enough to see him into this side from a pool of three games, despite a poor defensive record from Germany thus far.

Leonardo Spinazzola – LB - OVR 78>>84
It’s rare that you see a side win all three games during the group stage of a major competition let alone win all three without conceding a single goal. It’s very likely that as a result, we will see a couple of defensive players from Italy and with Spinazzola claiming MOTM from the first match alongside helping towards the clean sheet in the second he has stood out for me in a very impressive Italian side.

Andriy Yarmolenko – RM - OVR 77>>84
It’s strange seeing Yarmolenko’s performances after struggling to find a way into the West Ham side and looking very disappointing on the few occasions he has. Despite losing against the Netherlands Ukraine looked impressive and Yarmolenko found himself on the scoresheet with a fantastic goal. He then followed that up in their second match against North Macedonia scoring once and assisting another.

Xherdan Shaqiri – CAM - OVR 81>>86
Once again Shaqiri has shown his talent at a major international competition with some brilliant displays for Switzerland, helping them to progress as one of the best third placed sides with four points. The Swiss midfielder is definitely wasted at club level sitting on the bench for Liverpool and has proven that he can be an asset for a side should he get regular playing time. As for his performances in this competition two goals and one assist from a CAM role with many remembering his strike against Turkey as one of the best so far.

Emil Forsberg – RM - OVR 82>>87
The big question here is whether Forsberg can get in or not due to his recent SBC inclusion but considering that this will be a lower rated item and Sweden simply must get an inclusion after topping their group I can see an exception being made for Forsberg of whom has scored three goals in this tournament already. Lindelof is perhaps the only other option from Sweden but after conceding in two of their three games I feel that there are better options in that department.

Patrik Schick – ST - OVR 78>>84
When you look at the talent available during Euro 2020 not many people would have anticipated Schick’s name to be remotely close to a team of the tournament inclusion but with the Czech Republic starting Group D strong with a win against Scotland and a draw with Croatia, they practically secured their spot in the knockout stages. Schick scored three in those opening two matches with the goal of the tournament contender likely to be the one that stands out most. 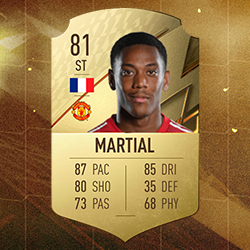