With no Premier League this weekend due to cup fixtures expectations were set low for TOTW 17. How things have ended up is the complete opposite though with a very strong side potentially on the way. Upgrades for Nkunku, Clauss and Diaz’s headliner cards alongside a SIF Theo Hernandez specifically stand out 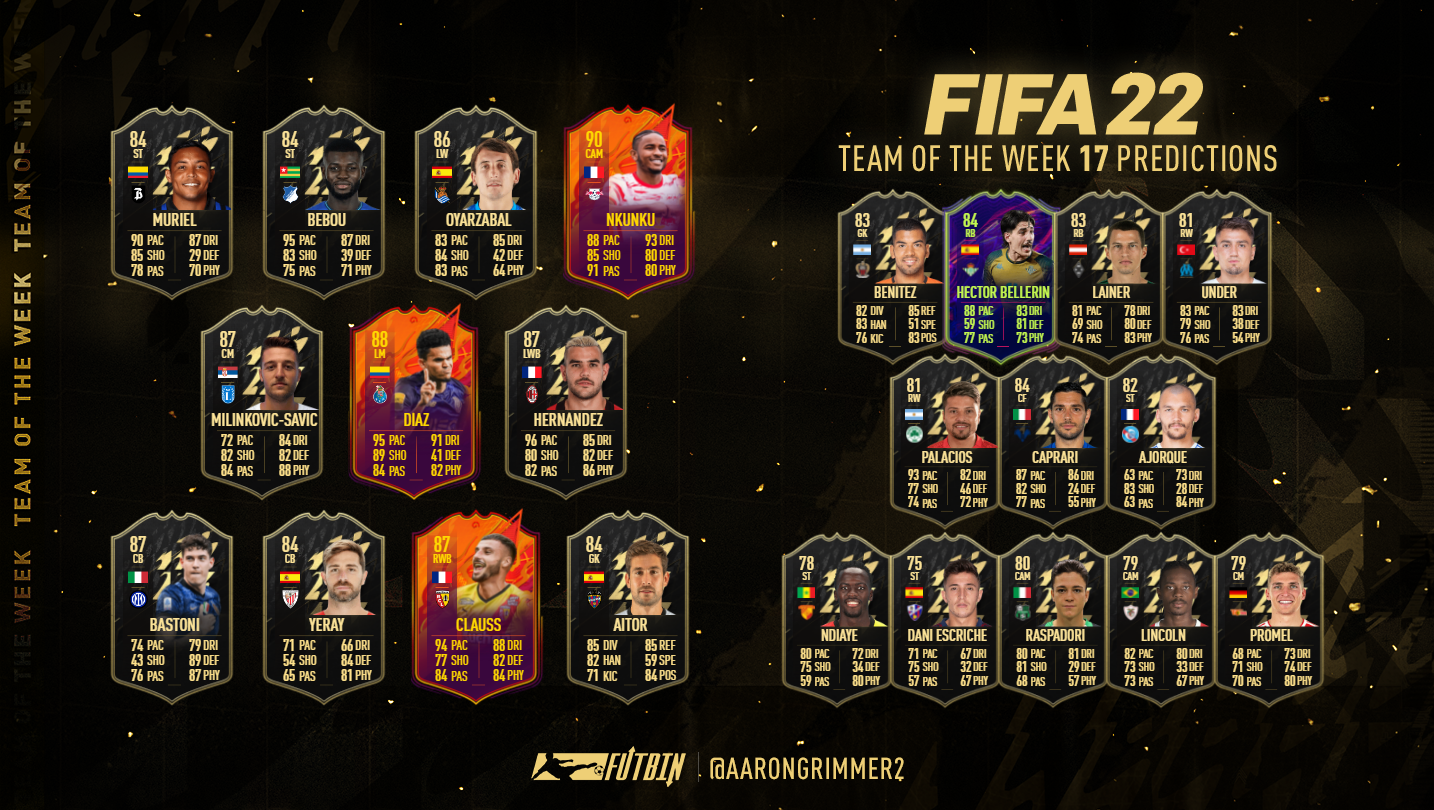 Aitor Fernandez – GK - OVR 81>>84
As far as goalkeeper selections go, they don’t come much easier than Aitor Fernandez. The Spaniard was simply phenomenal on Saturday against Mallorca, making a total of eight saves, one of which was a penalty to ensure that Levante came away with all three points. It was a much-needed win for the hosts, their first of the season and now sit just five points from safety as a result.

Theo Hernandez – LB - OVR 84>>87
There will inevitably be a few calls for Rafael Leao from AC Milans 3-0 away win over Venezia after he provided two assists. However, there is only really one option from this match and that is Theo Hernandez. The Frenchman scored twice from LB alongside helping to keep a clean sheet in a very dominant performance. Although one of his goals was from the spot there is no way that Hernandez misses out here.

Alessandro Bastoni – CB - OVR 80>>87
Bastoni has emerged as one of the best central defenders in Serie A this season putting in numerous impressive displays for the league leaders. This weekend saw another with both a goal and an assist helping Inter towards a 2-1 win at home to Lazio. A performance which saw Gazzetta award the defender an 8/10. Although this would be Bastoni’s third IF with a gap of five weeks to his second, I can see EA opting to include him.

Yeray Alvarez – CB - OVR 81>>84
Deportivo vs Bilbao was not the best spectacle, ending in a goalless draw but it has resulted in one of only a few defensive options for this week's side. Alvarez was a rock at the back winning a total of eight aerial battles alongside helping to command the backline towards a clean sheet.

Jonathan Clauss – RWB - OVR 77>>86
Although Clauss is part of team 2 the fact he is not in packs will work in his favour and although SBC cards getting snubbed for IF’s on a regular basis occurs with this one being beneficial for EA I can't see why they won't include him. Clauss was featured in L’equipe’s TOTW with a 7/10 after providing the assist on the only goal of the game as Lens beat Rennes 1-0.

Mikel Oyarzabal - LW - OVR 85>>87
There are going to be a lot of players with just one goal and in some cases even less included this week with cup matches and cancellations limiting the number of matches eligible for this week's side. Sociedad recorded a narrow 1-0 win at home to Celta Vigo with Oyarzabal scoring the only goal of the game. With a snub for the recent headliner promotion, I would fully expect the talented Spaniard to be included on Wednesday

Sergej Milinkovic-Savic – CM - OVR 85>>87
Although this card won't be close to that of his Winter Wildcard a SIF Milinkovic-Savic is still a very usable option and also likely to be significantly cheaper than his WW. Lazio will be disappointed with a draw against Empoli however it was very nearly a loss. A 93rd minute goal from SMS ensured Lazio didn’t go home empty handed and saw the Serbian pick up MOTM with an 8/10 for his brace.

Christopher Nkunku– CAM - OVR 81>>87
There were numerous Headliners that put in TOTW worthy performances however those from team 2 simply can't be included. Team 1 is potentially a push however it’s a risk I am willing to take. Nkunku was named MOTM with a 1.5 after scoring once and assisting another two during Leipzig’s 4-1 win over Mainz

Luis Diaz – LM - OVR 80>>88
Another headliner card set for an upgrade is Diaz. After Sporting lost their first game of the season it gave Porto a chance to gain some breathing room upon their rivals. It looked as though they were going to bottle it however, finding themselves two goals down. A superb turnaround lead by Diaz ensured they continued their unbeaten run to the season with a 3-2 win. Diaz scored once and assisted another which saw Abola award him a huge 9/10 match rating.

Luis Muriel – ST - OVR 82>>84
Muriel will always be associated with his pace due to cards on previous FIFA’s and to how overpowered they were. His performances for Atalanta last season proved that he is more than just pace though, scoring an impressive 22 domestic goals. He has been unable to replicate that form so far this season however with a brace during a 6-2 win this weekend he is in line for his first IF of the season.

Ilhas Bebou – ST - OVR 77>>84
Bebou is fortunate that teammate Raums IF was only 4 weeks ago, a gap which they tend to avoid as Raum would have been the man in this side. Bebou’s performance was still a strong one though scoring twice to help Hoffenheim towards a 3-1 home win over Augbsurg. An SIF and a tasty positional change look to be on the way as a result.

Walter Benitez – GK - OVR 80>>83
Both goalkeeping selections seem straight forward this week which is always a benefit for predicting. Despite Nice finding themselves down to 10 men in just the 20th minute they still went on to record a comfortable 3-0 win away at Brest. Benitez was pivotal to that though making a total of nine saves to keep the clean sheet intact. He was named MOTM for doing so with an impressive 8/10 awarded by L’equipe.

Hector Bellerin – RB - OVR 78>>82
All the talk is around headliners in terms of live items and thus OTW’s are going somewhat under the radar. Another upgrade could be on the way for Bellerin on Wednesday and its likely to make him one of the best RB’s in La Liga, or on his way to be at least. The Spaniard provided the assist for Betis during their 1-1 away draw with Vallecano and was named MOTM as a result.

Stefan Lainer – RB - OVR 80>>83
Gladbach recorded a shock 2-1 win over Munich this weekend, a result which gives Zakaria the first win required of 4. Lainer scored the goal which turned out to be the winner and as a result was awarded MOTM from Kicker with a 2-match rating.

Cengiz Under– RW - OVR 77>>81
Without the inclusion of Premier League this weekend it means that the other top divisions will likely get an extra inclusion or two each. As a result, there will be a few cheap inclusions into the side. One of those I feel is likely to be Under. The Marseille midfielder scored the only goal of the game during a 1-0 win over Bordeaux and featured in L’equipe’s TOTW with a 7/10

Sebastian Palacios – RW - OVR 76>>81
The Greek league is often overlooked and has been snubbed on numerous occasions this season also. They do have two IF’s though and thus it’s obvious that they can be included. Palacios scored once and assisted another for Panathinaikos in a 2-0 win over Aris on Wednesday and with a lack of players with more than one contribution I can’t see how he can be ignored.

Ludovic Ajorque – ST - OVR 78>>82
There were only two 8’s handed out by L’equipe this week and thus I expect both to be included by EA. The first as already mentioned was Benitez while the second went to way of Ajorque. The Strasbourg striker scored once and assisted another as they recorded a 2-0 away win over Metz.

Gianluca Caprari – CF - OVR 75>>84
A narrow 2-1 win for Verona over Spezia on Thursday ensured Simeone’s headliner card gets the first win of the four required for his upgrade, it was the wrong forward who scored the goals however with Caprari notching both of Verona’s. The Italian could be classed as either CF or LF but hopefully it will be the former to make him somewhat usable. With just six Serie A fixtures being played I would expect most games to feature someone so with a 7.5 and two goals Caprari is practically nailed.

Lincoln – CAM - OVR 73>>79
Sporting was delivered a huge upset and blow to their highly competitive title race with Porto on Friday. Losing 3-2 to Santa Clara meant their 16-game unbeaten start to the season has now evaporated. Lincoln was named MOTM with a goal and an assist to his name and although that is often not enough for the reserves section considering both the magnitude of the result and the lack of games available, I feel that he is now a very strong option for TOTW 17.

Giacomo Raspadori – CAM - OVR 74>>80
In a usual week I would have snubbed Raspadori for Berrardi simply due to it being a silver vs gold battle and the hat tricks forcing options like Raspadori out but with just the one treble available it left the door open for this sort of selection. Raspadori was named MOTM during Sassuolo’s 5-1 away win over Empoli, scoring twice from a CAM role to pick up an 8/10.

Grisca Promel – CM - OVR 72>>79
Following a similar sort of logic to that of Raspadori we move onto Promel. The Union Berlin central midfielder was pivotal in gaining a point against Leverkusen, scoring both of their goals in a 2-2 draw. Kicker awarded him an impressive 1.5 match rating making him among the best performers of the week.

Daniel Escriche – ST - OVR 66>>75
This was the spot I struggled most with, basically having to pick one from many braces. Escriche was the eventual player opted for scoring his two during Huesca’s 3-0 away win over Cartagna

Cherif Ndiaye – ST - OVR 69>>78
It was a very difficult reserves section to predict in general however one player that was easy was Ndiaye. The Senegalese striker scored three times for Goztepe as they cruised to a 4-0 win in their relegation battle with Antalyaspor.