So after scoring his 200th goal for the club, actually 201 in 174 games, I figured he deserved a review. I've used him mainly in squad battles on legendary and on ultimate in single player division 1. Dost is absolutely everything you need in a focal point target man for a team. He is a complete match winner alone, scoring from 30 yards out, either finesse or longshot, for those games you can't break through the defence. Also surpassingly his pace is nowhere near as port as the stats say, I don't use a chem style to modify them either, and due to his 93 attack position is amazing at making the perfectg run or finding the right space in the box for a pass or cross which he will dispatch. He also will finish 9/10 things you give him and the box and at a daunting 6'5" with 91 strength and 99 heading accuracy he puts away almost every header and wins all of them. Anything a striker can do he can do well, he is a complete forward for sure. Plus he has 69 assists to his name and has ridiculously good passing (especially through balls) considering the stat is so low, he has set up my wingers and CAM so much. He is all you need in a striker, everyone else has become irrelevant for me to even think of using there, even my IF Jonas who comes on at CAM and my SBC Gignac doesn't even factor in to the bench.

Finishing, 9/10 will go in, comfortable with both feet

Longshots, he's won me games singlehandedly just by scoring 3 or 4 from outside the box, either power or finesse

Passing, holds up the ball and then makes the right pass with the right weight on it to set up the oncoming wingers and/orCAM

Stamina, does not tire through the game and in the last 10 minutes seems an energy level above the opposition, usually nicking the ball off the defence and running through on goal to add to the scoreline

Heading, at his height and ability he wins so many things, all of my corners are directed to him and he converts 1 every other game roughly

Hold-up play, once again his bulk m,sans he is not bullied by defenders and can keep possession with surprising ability to keep at his feet to allow the rest of the team to rush on past him

Tendency to volley crosses instead of head them, it isn't much of a complaint as he typically converts them, just strange that someone with such high heading ability opts for a volley, though the volley stat is 90

Tendency to not always go straight into the box whilst your run down the wing, he can take a little time to realise he needs to be in the box for the cross, but he does always get in, just have to be patient for a few seconds and hold up the ball. 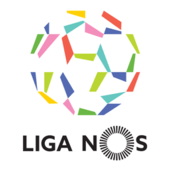 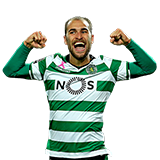 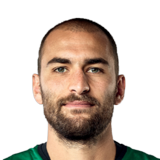 Bas Dost might be one of the best strikers I've used so far. He's surprisingly good on the ball and his shooting and heading is impressive. I personally played him with Depay and Promes but also Gelson Martins can be used. I played him in a 4-3-3 normal with no player instructions. After 10 games he scored 10 goals with not only his head but also goals like half-volleys.
Read full review 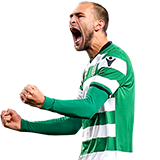 He is a beast, no defender can beat him in the air!About 50% of corners are converted to goals
Read full review
0
/600
Update my avatar Dos and don'ts
Top Rated
New
Controversial
Show comments