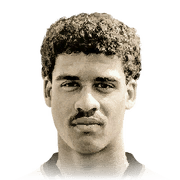 Rijkaard is a fine blend of finesse and athleticism at CB; composed, lanky, and dependable. For a quick background, I mainly play DivRivals in Division 3, and end up around 14-20 wins in weekend league depending on how the wind blows. I.e., I play Fifa a decent amount, but do not put any money into the game. I have a Serie A and Bundesliga team which I use interchangeably, both of which use the 4-4-2 formation and rely on strong CMs, (Delaney and Witsel, and De Rossi, Milinkovic/Boateng). Rijkaard was my first icon, and I chose him mainly to upgrade my 83 Toprak I was still using in the Bundesliga squad. I have paired Rijkaard with Juan Jesus (athletic) and Jonathan Tah (brute strength) and feel like pairing him with another athletic CB is the way to go. PLEASE play him with anchor chemistry, he goes up to a 94 rated CB.

Rijkaard has opened my eyes to how good icons actually are. So basically, highly recommend if you want an Icon CB. Rijkaard is awesome and way more fun than a CB should be. HIghly recommend.

Price- For 450k you can't go too wrong here; there really isn't another icon CB like him, maybe Blanc at 750K, or the GOAT Maldini at 1 million coins.

Speed- Not rapid by any means, but for a CB he can cover ground, and combine this with his interceptions, he is always in the right place and never seems to need to catch up

Defending finesse- This guy isn't a bulldozer, although with anchor he does have 93 strength, instead of bashing his way through attackers he surgically removes the ball with his long legs and speed/positioning. I played 152 games and only had one yellow card with him, which is a testament to this.

Aerial- He's 6'2'' and has 90 jumping with anchor and good strenght, so he'll win all the headers you need him too, except the odd Ronaldo-type header. On offensive corners he will once in a while score a goal, but you can't count on him like an Ibrah or anything.

Ball control/composure- Rijkaard never seems to panic, and is always smooth with distribution. Having a reliable CB to pass to and start attacks is invaluable. His passing seems way better than his actual stats.

Flexibility- If I get a head a goal or two in the second half, I'll often sub in another CB and switch Rijkaard to a CM/CDM. His composure and passing and interceptions are arguably more noticeable in the midfield, although I have solid CMs already so

Shooting- Not too applicable if playing only at CB, but if switching to CM he does get into good positions, but shooting is sorta ho hum. I found best results just using regular shots, no power or finesse timed, just good ole shot button. This seems to let his icon stats do their thing, and some of his shots can swerve and dip more than you'd expect. He isn't a prolific scorer, but I can recall a couple of goals that were clutch as all heck, sealing up important wins in weekend league. And again, this is a CB we are talking about here.

Dribbling- I actually liked how he dribbled, you can use his momentum to easily find space. But you definitely can't weave through a defense. His game is steal the ball, turn upfield into space, and then ping a pass and start the counterattack.

Aggression- He doesn't always attack strongly on the defensive side, but as listed above his defending skills are so good this means he is always in the right position, and doesn't give up penalties.

Playing him as a CB almost seems like a waste of his silky smooth passing and ability to control a game.

i tried almost every Cb this year and he is one of the best if not the best. This price for him is just joke i wont change him because of his style and always stats dont show the players... he’s legs are so long, he’s tackles are beautiful and He plays amazing using team press because of his stamina... I use anchor on him for Jumping boost primarily and he doing well. The best thing about him is his defensive IQ and positionings to get the ball back asap and helping you with his great passing to run the game again.

for a CB, nothing. No con in anything

***Disclaimer: this review is based purely on my playing style and preference***

This is the time of the year where all icons become more affordable.

And so far I have been experimenting a lot of icons all over the field throughout the year.

The positions where I just decided to try on over the past 4 months or so is CB.

(after spending most of my coins trying out forwards, wingers, midfielders but, the furthest back was CDM).

Apart from Maldini (OP icon on laon) I have tried most players in a 500k range out.

Those that I have tried are;

The ones I plan to get my hands on later are Blanc (middle or prime) and probably Maldini (baby as a LB or middle).

And let me tell you guys Rijkaard 88 CB is an absolute steal for the price!

In my humble opinion, he is not only offering the best value for money at CB, but he is right up there as one of the best CBs in the game!

For me personally, he is the best I have used so far (right up there with Maldini moment).

His positioning and interception skill is top notch. His tackling and overall physicality is superb.

His pace is great with Shadow on and he scores occasional headers for me.

Defensively he almost never lost any headers. This is the CB you need, trust me.

In this area, to me, he is in short a more agile Campbell prime.

But his hidden weapon is his passing. As you might have been aware his other cards are CDM so this is what you might expect from Rijkaard.

But, oh my word, his passing skill is phenomenal for me. His stats don't even do him justice. He is a deep-lying playmaker as a CB for me.

When I build up my counter attack after his successful interception or tackling, the range of his passing is awe-inspiring.

The super far lob through pass from him is just deadly, man.

Seriously, if there was a stat column called 'pre-assist' or something along that line, he would be a leader in this category for your team.

His lob through from deep in my own territory to the player on the edge (then followed up with a cross) has brought me so many goals.

The passing accuracy is pin-point and to my memory his deep lob through pass has never sailed out of bound, ever.

I don't care what the stat says but in real gameplay his passing is the best I have seen from a CB.

People who have played with TOTY and other expensive meta cards might think otherwise but as far as my experience goes he is such a class.

He is a total package. If needed, based on the players you have on the bench, he could fill in at CDM admirably.

I currently pair him with baby Cannavaro (which is another player who deserves a spot as the best value for money CB himself, too).

Don't want to make this into another Cannavaro review, but Cannavaro plays like a pitbull and his defensive prowess is very obvious even in his baby card.

Cannavaro is a perfect partner in crime for Rijkaard because he is very agile! He moves so smoothly (you won't expect his from a CB).

His height is not a problem at all. He wins headers very regularly against those tall meta strikers.Not all of them but this won't be a deal breaker for him.

I put a Shadow chem on both so pace is also their strength, I never got outrun by any forwards, thanks largely to their elite defensive positioning.

This is the duo that probably would last for a while for me...because they are very fun to play with.

I have not tried Blanc who many have raved about as well. But baby Desailly is also another good deal. As a pair, I heard many good things about them.

But until the day I feel like wanna move on from this pair, if it ever comes, they will be my perfect yin-yang duo at the backline.

4-5-1 as a set up for links but in-game I mostly play 41212 both narrow and wide formation, because I don't wanna get too meta with the 4231 narrow (just my personal take on this)

Passing, both deep and short

But both are mighty fine in my opinion.

I rarely shoot with him, if at all.

And he is no Sol Campbell, he is not clunky at all for his size.