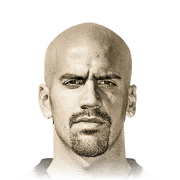 After using almost all CM's in the PL, i wanted to add that little extra in the center of the field. I tried baby Lampard - who lasted only 2 games - before forking out 600k for 88 Veron. He turned out to be exactly what i needed. Strong, can tackle, can pass, positional play was great, and has a rocket of a right foot! He played 31 games (28 Weekend League), scoring 16 goals, and assisting 8 (easily the best return from a CM i've had, and even better than POTM Lucas!). Highly recommend if you are wanting that midfielder that will give you that bit extra.

Passing - his passing was reminiscent of Fifa 18. smooth and consistent.

Shooting - Whether outside of the box, of inside, given the space he is clinical. i scored plenty of banger's with him.

Defense - Although not the best defensive midfielder out there, the guy is solid and rarely loses out in duels (probably due to his high aggression.

Positioning - Has a real good balance in terms of positioning. always available to receive the ball and makes good forward runs.

Work rates - I'm more of a H/H type of guy. A slight flaw but made up by his good positional play.

Skill moves - because who doesn't want at least 4* skills, right?

Stamina - despite having quite high stamina, he was always lower than my other 2 CM's at the end of a game. (likely because i used him much more).

If you are looking for a great cdm with the ability to score, veron is the player for you. One of the best passers I have used this year, sending perfectly weighted through balls to create counter attacks. Veron is also a very good defender. (i used shadow chemstyle), he always seems to be in position to intercept the ball. Strong in the air, able to outmuscle most cam/st coming his way. Pace is not the best, but he feels slick and can carry the ball up the field when needed. When it comes to shooting, veron's shot power destroyed the many de gea's I have faced over weekend league. dribbling is very good, rarely loses ball but is not the most agile player. Overall I find veron a very good icon cdm compared to other icon cm/cdm. I used him in a 4-2-3-1. Ratings are given based on what I think he feels like in game.

-Shooting will not let you down, will bang in the goals when given a good chance. (will not miss easy goals like kante)

-Passing is splendid, can pass anywhere on the pitch

-tackling is very good due to strength and aggresion. Has great positioning for interceptions.

-Decent pace, good enough to run away from fabinho's and casmeiros

-dribbling is slick, can follow the play with movement off ball

-heading is great for me even though jumping is shit

-Stamina will last whole game, even in extra time. (has M/M workrates)

-could be faster (although he is fast enough w shadow)

Amazing longshots and passing, but he feels way to slow in game and gets tired to fast. His dribbling also feels worse due to his lack of agility and pace. Very good player, but not worth 700k coins, cheaper players can do the exact same job as him. Doesn´t fit my playstyle, but a good player if you play to his strenghts.