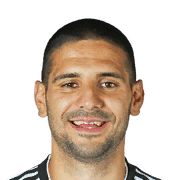 Mitrovic is by far the best target man I have used this year, and I've used IF Wesley, Harry Kane and Mandzukic among others, and non are better than Mitrovic

I used the Marksman chemistry style, giving him a boost to his shooting, dribbling and physicality which is vital for how I use him!