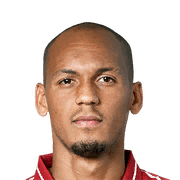 This card is amazing. He is one of the best CDMs in the game. His height, defensive work and stamina make this a great card. Pick him up and you wont regret it, he will dictate the middlefield and he can pass the ball really good too. Med/Med works rates are fine, his speed is just fine and he does well on and off the ball. His interceptions in game are definitely more than 84. Also with 91 penalties, you are picking up a good penalty taker.

I initially owned my first Fabinho card when I packed him back in October as a newbie to FUT and as my team was understandably shocking, I sold him immediately for a nice profit of 75,000. Even then I knew he was a beast, but I needed the money, and had to make the tough decision. Fast forward to a few days ago, making a Brazilian/German/Bundesliga hybrid squad I needed a CDM to link with my Sane card and it was down to Fernandinho or Fabinho. After reading the Fernandinho reviews and people raving at how much better he was than Fab I bought him for a cheap 22,000 and boy was I disappointed. He had an immediate negative impact in my team and I felt I had a gaping hole in my midfield as he was nowhere to be seen in the game. Not present for interceptions or duels I quickly realised he wouldn’t work for me. Enter Fabinho, the 2nd coming. From the first 20mins in-game time Fabinho had racked himself up an impressive 4 interceptions and maybe it could be said I was playing against a bad opponent but something about him just felt…different. He was a bully and a tank in the middle, with impressive pace and stamina to keep up with quick passing opponents, not to mention a good physical presence in both defending and attacking in corners. Without a question he was better for me and Fernandinho and I do understand it is subjective dependent on how they are played and which tactics are applied, I feel I had to do little in the way of tactics or instructions to make Fabinho my 2nd best player in an already okay team. He works great for me as a CDM and I will definitely be upgrading to his IF!

I use him in 442 formation with casemiro and these two are just bullying other players in the field. You cant get past these two ever, they run around like the flash and is just as big as a mountain. Whenever he goes for the ball, he always almost gets it. He doesnt lose the ball, and i have managed to score a few goals with him with both feet even though he have 2 star WF. If u are considering getting him, dont think, just buy and u will see the difference. Pair him up with casemiro and nothing get past your midfield. Pace isnt an issue really.