I packed some nice stuff from FUT champs but it was unusable for me so I decided to check if there were some sbc's I could do.

I check futbin and I saw Schmeichel as a cheap option, I was first doubting between Rivaldo or Luis Hernandez but I didn't have the coins nor players for it.

But then I realized how bad Donnarumma TOTS had performed for me, and I saw Schmeichel at about 400k, I had about 150k in coins but alot of high rated special cards I didn't use.

So I started the sbc and I was lucky, I was able to complete his sbc, and man, what a difference compared to Donnarumma. Schmeichel is the best GK I've used and I had Lafont 90, Carniball Lloris, Buffon UCL, de Gea gold, Courtois gold and UCL, Szczesny, and TOTS Donnarumma. Schmeichel 93 is better than all of them for me.

Goalkicks from hand or ground

Leadership trait (give him captain)

Some can argue his speed is average, but it's good enough on basic and he does very well in 1on1's. 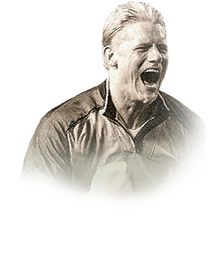 Spending money in a keeper...

Since I started playing FIFA I've always herd the same comment: "Do not spend money in a keeper!" "It's not worthy" and so on...The only issue was that all my previous keepers (Courtois, Oblak IF, Casillas Flashback, De Gea TOTY...) seemed to be like De Gea in the last matches with the Spanish selection, completely useless... I got so frustrated playing Division Rivals, just watching how opponents' ...
Read full review

This is my first time writing a review on a player. And I'm writing on a GK position - a controversial position that always filled with both love and hate in a player. I will try my best to be objective.I will start by giving you guys a little bit of my background. I started playing FUT from FIFA16 and I normally just play for fun (I have a job and a mortgage to pay so I can't spend a huge amount of time/m...
Read full review

Let me start off by saying Ive used courtois (gold and ucl) for more than 200 games and briefly used navas, ter stegen and oblak gold... This guy is a monster... Nothing like courtous where the ball passes right through his legs and where hes amazing in one game and shit in another. Schmeichel has the height for those finesses, excellent positing and has saved me on countless games in rivals and futchamps that I wouldve los...
Read full review
0
/600
Update my avatar Dos and don'ts
Top Rated
New
Controversial
Show comments