Hello there! Welcome to my review of POTM Lucas!

For some changes in my first iteration of my Italian/Brazilian starter team, I wanted to switch my weaker links out. Lucas was predicted to get the first POTM card, and luckily he did. He would be replacing Bernardeschi at the RW position. I switch to a 4-3-2-1 formation, with him remaining at the right flank.

Unlike some of the other reviews, I was a bit skeptical about this card. I wasn't sure if I should get him, because he had poor stamina. Knowing how much I would need good stamina in the way how I play FIFA, I eventually gave in to his otherwise impressive stats. It wasn't his stamina which let me down, but rather these strengths. Let me explain

Completely logical this is one of his main eye catching stats. Blistering pace is a weapon which has been exploited in FUT throughout the years. Lucas is no exception. What is an exception, however, is that he doesn't feel this fast to me. I'd rather say it's about the mid-80's. He's fast, but even without the ball he's just not outpacing players he should have no problem leaving behind in dust. This is where part of the frustrations begins. He does have his moments when he's turning up his engine, but not enough times to be a constant danger. If anything, his tuned down engine has been his standard pace to me. Consistency, as mentioned by others, also seems to be a problem for me.

Knowing his shooting might need some help, I decided to slap on the Marksman chem style to make him a goalscoring machine for my team. His base stats weren't bad, both with an seemingly great pace and pretty good passing, but with Marksman he should've been unstoppable in front of goal. Unfortunately he hasn't turned into a player I have confidence in when it comes to finishing his chances. Scoring 7 goals in 16 matches doesn't look bad, but when seeing some of the excellent chances he's had for me will make you feel disappointed. He's missing chances other player with (way) lower shooting do score. He has hit the woodwork more times than the amount of goals he has scored. That is frustrating to say the least.

Being gifted with good passing stats, I decided not to increase these attributes with a chem style. And that's gone pretty well. His crosses are fine, and his short passes do reach their target. Long passes are a bit more questionable, but most of the time they are accurate as well. His curve is decent, not that special or anything. 7 assist aren't a bad total, so I am content.

One of his strength according to his stats. Even further increased with Marksman, but it's still not feeling like 93. His agility stands without question. Together with Nakajima he has one of the finest agile movements in close spaces. It's an ability I do like to use frequently. His dribbling is incredible as well. Ball control might be worse than what his stats show. The ball escapes his feet too many times for my liking. But if he can keep control, Lucas will reward you with a proper fine dribble. Balance is also a stat which feels worse in-game. Here, however, there is no redemption unlike his ball control. It's just not as good, especially noticeable when he's being challenged.

Like almost any attacker I'll not cannot go into much details here. Defending isn't his job. Once again it's rather his pace which might gain ball possession, not his defensive skills.

Simply put, it's not great. His stamina is a bit better than I expected (he is able to hold out relatively well), but his strength (even with a small boost) is very poor. He's so easily dispossessed it's not even funny anymore. His jumping and aggression, or rather lack thereof, isn't helping him as well.

One consolation, I packed Neuer from one of his SBC packs. Meaning I got Lucas for free. Not a bad deal actually. I did expect much more than what I have received, and I have a feeling I'm not the only one. I just haven't gotten this lad to work, while his stats do show amazing promises. As his stats are quite extraordinary, I don't really have a good chem style suggestion. I used Marksman to try to increase some of his strength beyond their limit. I might switch that around, but that's for another time. First it's time to sit in a corner and remain disappointed... 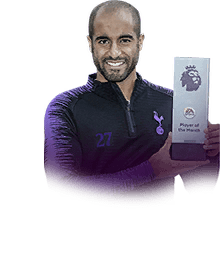 Cheated winger for less than 50K

Lucas Moura POTM is a top quality player for less than 50K.His pace is superb, his 96 of aceleration makes him an unstoppable player when he begins to run down the wing, his shot is decent for a player who plays in this position, This Lucas is a great passer, his passes to the box are really nice and if you put him alongside Son and Zaha this Lucas will be his perfect partner in crime, he assist so well, and this is ...
Read full review

He is very good, i used him for plus 100 games, and i havent regretted doing the SBC one bit. He is a very good option compared to the price, but doesnt compare to the top players Bale, Mbappe. He is defo top 5 RW/RM/RF in the game atm. He is also a suberp super sub, for any team, to bring in PAce in the final parts of the game.
Read full review

Whew, where do i start?First of all, this man is an absolute steal for only 50 k at the start of fifa...His pace and dribbling are just so op and with timed shooting he will score anydayHe also gives important passes and assist and with teixeira as striker (Lucas 7 chem) he just dominates them allHes bit weak though and has bad stamina but it atleast for now have not mattered
Read full review
0
/600
Update my avatar Dos and don'ts
Top Rated
New
Controversial
Show comments