I don't even know what to say, this card is just unreal. I’ve used the likes of Thierry Henry, R9, Raul, Stoichov and pretty much every card around that price range but this Eusebio is by far the best card I’ve used in any Fifa ever. I usually bounce between teams but I tried Eusebio and I’ve had him in my squad for 3 weekend leagues now. He feels as fast and agile as Messi, shoots like Henry, and believe it or not can match the physicality/heading of CR7. He has 104 goals in 66 games for me. For this card unlike most icons you definitely get what you pay for.

Height?? Even though his jumping makes up for it 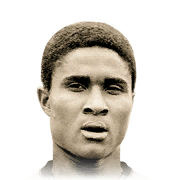 'THE BEST STRIKER I'VE EVER USED'

Just look at his card... What hasn't he got? He's got: Skills, power, Pace... Anyway this Eusebio card is probably one of the best cards I have used on FIFA. TOTY's, Pele, Ronaldo, the lot. My success with Eusebio has come in 14 wins 2 draws 0 losses. This record is in division 4 so relatively good opponents. Although I have only used the 'Baby' Eusebio, I found his card to be perfect with the pace being so good.
Read full review

"Baby Eusébio"The best addition to any team struggling with breaking through small gaps in defenses, and can hit them CRAZY long shots. I use him as a CAM in the 4-2-3-1 and he is always int eh right place at the right time!
Read full review

The best striker that I used in fifa 19

The best striker in fifa 19,the 5 stat weak foot makes him even better than he is,honestly his shooting is schoking me time after time.
Read full review
0
/600
Update my avatar Dos and don'ts
Top Rated
New
Controversial
Show comments