When first using Pepe, I expected him to have insane agility due to his 99 stat on this card however he did not feel fully up to this standard but he did feel agile and quick to an extent but what is very surprising is his ability to keep the ball despite being shoulder to shoulder with a LB. He seems to keep the ball a lot in these situations, similar to Mbappe, despite his strength only being low at 66 and his balance being 83. He feels fast but maybe not quite as fast as Mbappe but makes up for this in other ways, the dribbling compared to Mbappe's card feels similar too, with the ivorian being quite tall too with good jumping it means that a back post cross can be very effective with him at RW, especially with Hawk on him. One con on his card is his weak foot, however when cutting inside and finessing this card is extremely good value. His passing is something which is notable too as he is very useful with crosses and passes due to his good vision short passes and curve. Mbappe's passing is one thing and perhaps the only real thing which lacks in my opinion.

Mbappe does of course have the finesse shot trait but this guy is one deadly finisher both inside and outside the box, having better shooting stats compared to Mbappe, something which you can feel when shooting. His weak foot is a con but something which is yet to be fully used, he can cross effectively with it and can score on his weak foot provided it is a timed shot in the green and sometimes timed finesses in the yellow. So weak foot is not necessarily the worst con but does make it slightly more predictable what he will do, however as this player is less well known, most people cannot predict that you will only shoot with his left at most times. Cutting in from the right is something which he can do superbly and I think better than Mbappe, his 4* SM are effective and can help to cut in. He can be used both as a starter or an impact sub, in both roles he can thrive and be a thorn in the opposition's side. In reality I think with this Fifa's play style, Mbappe is the better player in terms of dribbling with his 5* SM compared to Pepe's 4*, however 4* should be good enough unless you really care about being able to do so,e certain 5* SM skills. 4* WFis obviously something which Mbappe has and Pepe does not but Mbappe is less effective at cutting in and scoring timed finesses outside the box due to him being right footed. Pepe is definitely the better finisher with his shooting stats being already very nice but with the right chemistry style they can be even better. His long shots are very accurate and possibly better than Mbappe's 76 long shots and his low 78 shot power compared to Pepe's 91 shot power and 83 long shots. Their stamina is very similar too, with Pepe having 81 and Mbappe having 83. Stamina is not a massive issue but he may be low towards the last 10 minutes of the game and definitely for extra time in FUT Champs. But conversely he could also be used as a great impact sub to add pace to the game against the lower stamina defenders. People with him as their red pick should definitely try him as a sub towards the end of games as he could help win a few games for you. I have used him on and off as a sub and starter to see where he makes the most impact but am yet to see which is the best for him as he makes a great impact in both roles.

The reason for this card being so much cheaper however I think is because of the hype around Mbappe and also the fact Pepe has 4* SM and 3* WF compared to Mbappe's 5* SM and 4* WF. If he was french and didn't play for Lille and possibly in another league it is quite likely he would be double or more than the price that he is now. With a winter upgrade surely coming soon too, it might be worth an investment in this guy for your team, as if you try him I think you will be surprised as he definitely surprised me. I think it will depend a lot on your playstyle but of course Mbappe is a very good player on this fifa but this guy probably gives him a run for his money especially at almost 1/6th of the price at the time of writing but Mbappe is best played on the left whereas this guy is of course best played on the right because of his weaker foot. Value for coins is excellent so give this guy a go and you may even prefer him to Mbappe (as a right wing player cutting in especially). I'm only going to give him 4.5 stars as he could be slightly better, and if he gets another IF that card will be really good too but he's not quite perfect yet, but Mbappe isn't completely either. 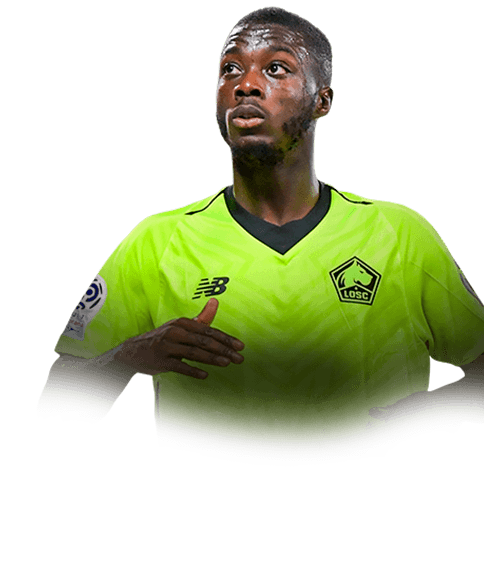 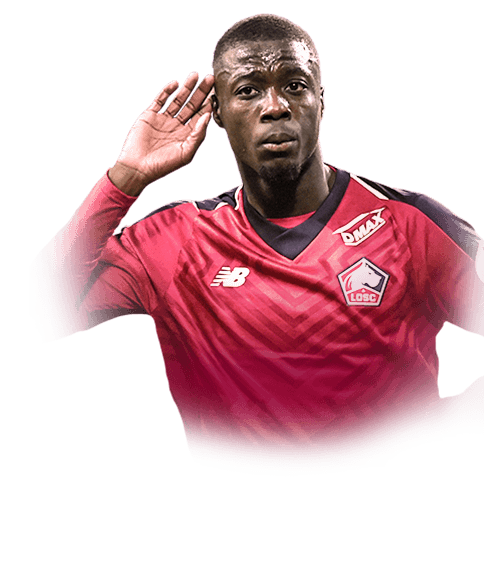 As the headliners promo was released I decided that I wanted this man after previously using his in-forms by doing this I found potentially the filthiest card this ever graced the earth. For only 100k this player has to be the biggest steal so far in the game I have played him at LAM and also at RAM his crosses are dirty and his weak foot feels like a 4 to 5 star which gave me more confidence to start shooting on sight with...
Read full review 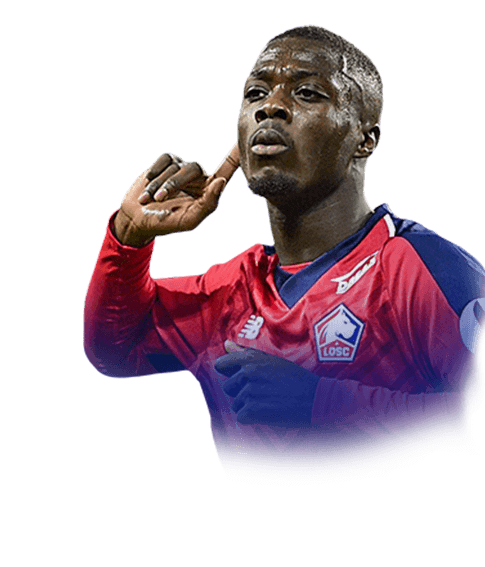 I bought Nicolas Pepe because his stats looked vey good, and I needed goals from the wide positions, First game he scored a hattrick! One goal with the left, on with the right, and one with his head. He is 183cm which is pretty tall for a winger, and his 99 jumping makes him unstoppable in the air. By far my favorite player in Fifa 19 so far.
Read full review

I sub my pepe in at the beginning of the game so this experience is at 5 chem. Deadeye.With 95 Acceleration, 99 Agility, and 97 Curve, just cut in and finesse it from outside the box. He puts it in at an angle that's impossible to stop, I've never seen keepers in Fifa 19 just stand still so many times.
Read full review
0
/600
Update my avatar Dos and don'ts
Top Rated
New
Controversial
Show comments