The title is called the real kluivert since this card is what his prime should have been! I saw there are alot of reviews here but I decided to actually play two weekend leagues and alot of rival games with him before writing this review. You're reading this because you're unsure, I hope I can help you with that. I've tested him for 108 games a mix of rivals, WL (G1) and some squad battles on legendary. He played as the tip of the spear in a 4231. He scored 108 goals and gave 52 assists. Most people will say that this is a great contribution on paper it is. Ingame he could have had 200+ goals.

He isn't the finisher I wanted. His movement off the ball is good, always in the good position. But when he is one on one with the keeper it has 75% of going in the other 25% is something weird. You can shoot with the same shotpower everytime, sometimes it's a banger other times it's a miss. For this price I didn't want that.

Crossing and corners is another story, he is the boss! The finishing could be fifa.. who knows a perfect green timed shot from 8 yards should go in simple as that.

I won't dump this card still one of the best striker icons I've used. He is above the bunch but below the top icons. For me he plays better than Hernandez, Klose, Crespo, Lineker, Vieri, Van Nistelrooy, Shearer, ..

If those cards get a moments it another story. He is not as good as R9 or CR7.

I used an Engine on him. He is alot quicker with the balance boosted, finishing is high enough without chemistry. 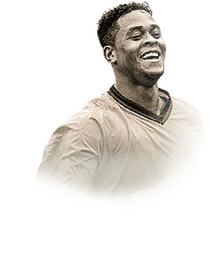 Im a div 2 player and half way through my weekend league I hit a wall with my prime Crespo who I felt wasn't cutting it against all these OP pay to win teams, so I used him in the SBC for Kluivert, and it was the smartest move of my life. In 10 games he scored 12 goals and got 8 assists. I start my games in a 41212(2) with him and prime Butragueno up top so usually my goals to game rati...
Read full review

Kluivert, the goal machineNeeded a top rated striker for my team, Kluivert definitely was the answer.Guaranteed goals with shots from inside the box.I use him as my lone ST in a 4-3-3.
Read full review

A true forward. Patrick Kluivert was a player I would love to be old enough to watch when he was playing the beautiful game. Watching videos and hearing stories about him was very intriguing to me. I'm happy to see players like Ronaldo and Messi. Anyway, Patrick Kluivert Optimus Prime is a beast, he scores goals with incredible ease. Is super fun and...
Read full review
0
/600
Update my avatar Dos and don'ts
Top Rated
New
Controversial
Show comments