Saddle up boys, because I'm about to tear this Sunday League dropout a new one. Before I start, keep in mind that I literally just created a FUTBIN account at 1:00 am solely to write this. I've played with Courtois for 91 games now to get chem for Varane and Ramos, and every game added to the tally is a mistake. I've played with a lot of keepers in this game, and let me say Courtois is by FAR the most frustrating "high end" keeper in the game. He might as well be cross-eyed because he can't track a floater down the middle if his life depended on it. His reflexes feel way too slow and his positioning is garbage. He comes out on corners and will catch anything in the 6 yd box, but if the ball is played outside of his reach, he always keeps coming out and in the blink of an eye the ball is behind him in the goal. Beware of any winger's run on the goal line because if the ball is played across on the ground anywhere near him he goes full on Phil Jones and can't help but bash it into his own net. Shots regularly go in right over his shoulder as he constantly uses the opposite hand to make a save (i.e tries to save a shot on his right by bringing his left arm across his body). His kicking is useless as he constantly boots the ball out of bounds, and for the love of God do not try to use him to play out of the back. Overall, the only pro of this card is the chem, and for the sake of mental health, do NOT use him.

Reflexes of My Senile Grandmother

Game Changer (He will lose games for you) 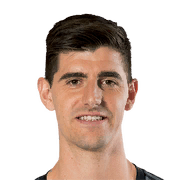 This Guy feels like Cheating. So many awesome saves for me. Would understand if EA makes an Update for this Goalkeeper, because he is so OP. It's not even the attempts from the distance. He saves absolutly save goals from 3-4 metres for me. And often he catches the ball. Just awesome. I often feel so bad for my opponents.Tried Allison Becker an Perrin before. He is the one.
Read full review

I've used gold De Gea, TOTS Ter Stegen, Lafont future stars, Lloris Carniball, and Courtois 90 and 91 UCL card.I can say that 90 Courtois has been the most solid one for me with a basic chemstyle, as a second option I would say Lloris Carniball and then perhaps gold De Gea.
Read full review

The Loved and hated one

I will tell my story of the GKs of fifa 19. In my club they have played GKs like Lloris, De Gea, Alisson, Ederson, Handanovic, Ter Stegen (My best GK fifa 18), Navas, and many more. No one was courtois. My tittle says loved and hated one because he has some games and other same games.. but in general he is for me the best GK. He has block some shots that i stay life if you pack Messi. Other times, generally in FUT Champions...
Read full review
0
/600
Update my avatar Dos and don'ts
Top Rated
New
Controversial
Show comments