Pick up this man and Rodrigo to be able to complete the two weekly objectives in rivals, And i can tell you as a central CAM this man did absolutely not disappoint.

Now id be lying if i told you he was as good as Bergkamp. But he was very enjoyable to play with and absolutely out shined Rodrigo(Base GOLD). He in was mainly just extremely well positioned and that why he was able to pounce on the opportunities that were afforded to him.

His biggest Negatives are his Dribbling and Skill moves(3*). So i felt for my below Average Fifa ability this left me just drag backing into fake-shots.

So personally Id recommend him to be able to knock of the weekly objectives. Id just like to note he didn't work out wide the first 2 games i played with him. Also took him off as soon as he or Rodrigo scored. 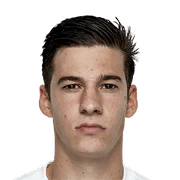 I used him to get the rodri tots so i had mean untradeable so i decided to use him and after i got the rodri he's stayed as my main striker. I'm in division 3 so its not like I'm playing against people with little experience. i 100% recommend him to anyone with a spainish team or can fit him in to their current one.
Read full review
0
/600
Update my avatar Dos and don'ts
Top Rated
New
Controversial
Show comments