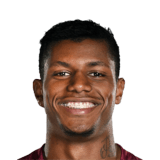 8
Sub out
Upcoming Matches
P. Chemistry
Squad chemistry
ST
78
RW
73
LW
73
CF
76
RF
76
LF
76
CAM
74
CM
71
RM
74
LM
74
CDM
60
CB
55
LB
54
LWB
57
RB
54
RWB
57
Reset
Basic
Sniper
Finisher
Deadeye
Marksman
Hawk
Artist
Architect
Powerhouse
Maestro
Engine
Sentinel
Guardian
Gladiator
Backbone
Anchor
Hunter
Catalyst
Shadow
Comments
Reviews
0
/600
Update my avatar Dos and don'ts
Top Rated
New
Controversial
Show comments
Top Reviews
Only logged in users can submit a review
A review must be written in English
At least 200 characters are required.
Compare this player to other similar players you have used(optional).
If you import your club to FUTBIN or send us an image with the player data(fill the form below) your review will be marked as verified.
Include what you liked about the player in the pros area and what you disliked about the player in the cons area.
Your review will be manually checked during the next 24 hours.
Chem Style Used
Formations
Position
Rate Player Base Stats (1-10)
Pace
5
Shooting
5
Passing
5
Dribbling
5
Defending
5
Physicality
5
Most Used In:
Submit Review

I bought him for my Trossard League Player objectives. I sniped him at 650 but he did rise to 1.8k during the current hype of the milestone. He is not worth more than 500 coins. He can't dribble he just gets beaten by defenders for pace. I played a 180 who were playing a completely gold team and he did get in the box to make more than twelve shots. However, out of those twelve shots, only one went in, two hit the post or crossbar and the rest were weak, good saves or just terrible finishing. By the way, the team I was playing had base Ben Foster in goal. Playing teams with Ederson or even Bernd Leno he doesn't stand a chance. If you buy him because you've heard the hype about his agility or strength, he is useless and can't get beyond Joe Gomez. This is why I don't recommend getting Wesley and if you need an EPL Brazilian you should save up 3k, it doesn't take long to invest in that and buy Gabriel Jesus or Lucas if you get that far.

Links to Brazil and EPL

Good Amount of Assists but those have been tap-ins.

Not the Advertised Strength

No Fake Passes or Shots

Can't shoot to save his life.

wow! what a striker very strong with a good finish and he his not so slow i bought him to my starter team at a sub then he was so good that i build a team for him the brazilian team its a amazing team and wesley scored for me 50goals in 43 games! and asisted 11 amazing striker even for a sub.